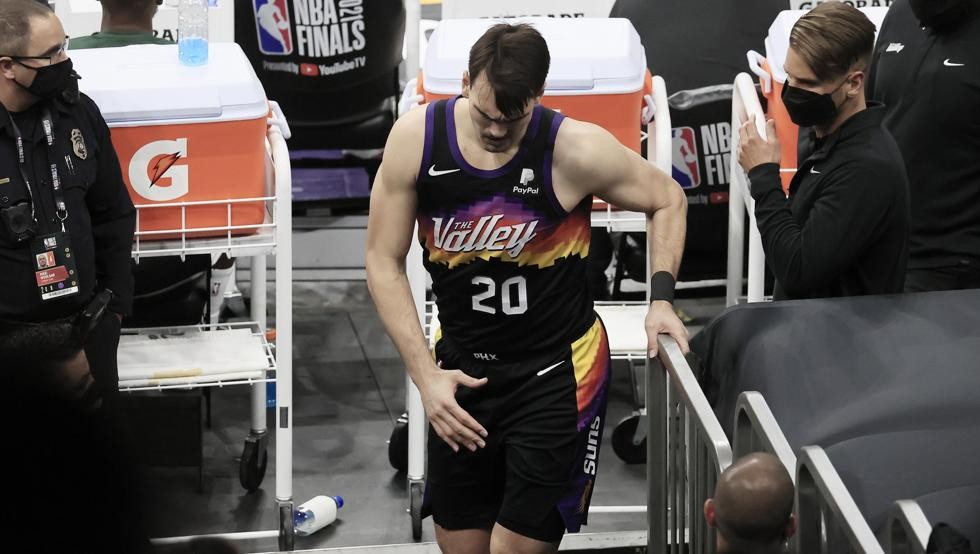 Is it out of character to see a playoff series in 2021 without witnessing an injury? We’ve seen the biggest stars in the league go down like flies. The plague of injuries has taken over the headlines in the NBA Playoffs. Recently the NBA Player gone down with a gruesome injury is Dario Saric of the Phoenix Suns.

Also Read: Why are the Phoenix Suns referred to as “The Valley”?

With just 2 minutes left in the first quarter Dario Saric drove into the lane with Brook  on him. He pump faked the ball. The Ball got stripped and Dario tried to the kick the ball out. But he came down hobbling on the play. Saric tried to run up on the court but could barely make it up.

He left the game with just 2 minutes of play. Saric just registered one rebound and did not return in the game.

After further tests his injury has been diagnosed as a torn ACL. He will be out indefinitely and most probably not return for the NBA Finals.

Suns forward/center Dario Šarić has sustained a torn ACL in his right knee. He will be out indefinitely.

Dario Saric has not been as involved as he is used to being. In Philadelphia, he was a key role and when they lost him they looked so much weaker. He can spread the floor and is the ideal forward to come off the bench and provide scoring.

But his role has dropped massively on Phoenix Suns. He averaged 17 points in his first run with Philly but now averages just 4 points in the 14 games he played. That shows that he has the potential to be that piece if they need that from him.

People presume that a player averaging just 4 is not that big of a loss. But every player in the NBA knows that they lose morale. A team in the NBA Finals have been through a lot and form a sense of comradery. In training they help the starters get better.

Dario could turn out to be the difference makers in game just based on the talent he has showcased previously in his career.  Will his loss be reason they lose the NBA Finals? We’ll find out.