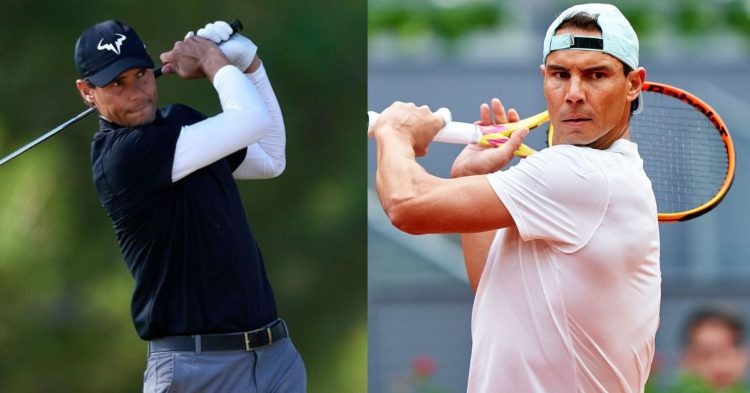 It seems like tennis is not the only sport that Rafael Nadal is good at. The world number five recently participated in the Balearic Golf Championships in Mallorca just a week before Wimbledon. Interestingly, he finished the tournament at the fifth position with a score of 78.

Nadal has expressed his love for the game multiple times in the past. One of the reasons why the Spaniard likes it is because the match takes place in beautiful clubs and the view is spectacular all the time. In an interview in 2012, Nadal said, “Golf is great because you are always in beautiful places when you are playing.”

Nadal is already in London after playing the golf tournament and is currently focussing on the Wimbledon. The 22-time grand slam winner is practicing hard to win the third grand slam this year. Wimbledon has been Nadal’s weakest tournament as he has won it only twice till now.

He recently posted a story on Instagram from London giving a sneak peek into his practice session. He will most likely play the grass-court exhibition event held at the Hurlingham Club in London. That will be his only warm-up tournament before Wimbledon.

If you look at Nadal’s illustrious career, you will notice that he has struggled multiple times with injuries. However, he has managed to bounce back every single time and currently stands alone at the top with 22 grand slams.

That is also one reason why he likes to play golf. Golf, when compared to tennis has very low chances of injury. The physical movement is much less in comparison to tennis. For someone like Nadal who constantly gets injured playing tennis, golf comes as a relief to him.

During the same interview in 2012, Nadal said, “The risk for injury, as you know, is very small.” Nadal suffers from a chronic foot injury that continuously bothered him during Roland Garros this year. With his foot troubling him, it is good to see Nadal confiding in a sport like golf to take a break from tennis.