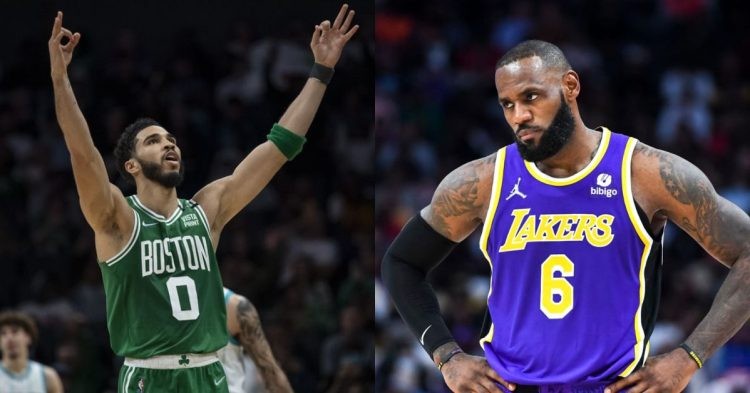 The Boston Celtics star Jayson Tatum is coming off one of the best years in his career. Alongside Jaylen Brown, he helped the Celtics come out of the Eastern Conference and make it to the NBA Finals. This was the first time in Tatum’s career, that he was able to lead his team out of the conference.

We are unaware of how much Tatum has achieved in his short time in the league so far. Some statistics prove that he has done even more than LeBron James and Magic Johnson before turning 25. We already know that both these NBA legends have multiple titles and accolades to their names. Thus, it is important to know what Tatum surpassed them in and how that came to be.

The statistic in the discussion was shared by a Boston Celtics reporter named Taylor Snow. He showed how JT managed to reach this accomplishment faster than LeBron James and several others. Moreover, he even made a list showing how old those players were when they achieved this particular milestone.

As we can see, Tatum appears to have done better than several NBA stars for his team by the age of 25. LeBron James, Kevin Durant, Kobe Bryant, and Magic Johnson all took a little longer to record the same scoring numbers. This might let some people assume that Tatum is better. However, it is important to understand how all their situations were different.

Kobe Bryant and Magic Johnson are Los Angeles Lakers legends. They were both drafted by the Lakers and have proved to be some of the best players to emerge from the franchise. However, some of us can recall that both of them played alongside NBA centers like Shaquille O’Neal and Kareem Abdul Jabbar. As a result, they were not really the primary scoring options early in their careers.

Kevin Durant and LeBron James should have recorded this at a sooner age than they did. However, neither of their teams was as competitive as Tatum’s Celtics, especially during the early years. We all remember that the Celtics have gotten closer and closer to the NBA Finals ever since drafting Tatum.

Since he is the star scorer on the team and it has consistently made the playoffs for several years now, Tatum has been able to surpass the other NBA greats is reaching a milestone of 1500 points and 500 rebounds in the NBA playoffs first.
Tags: Boston CelticsJayson TatumLeBron JamesNBA
Previous Post