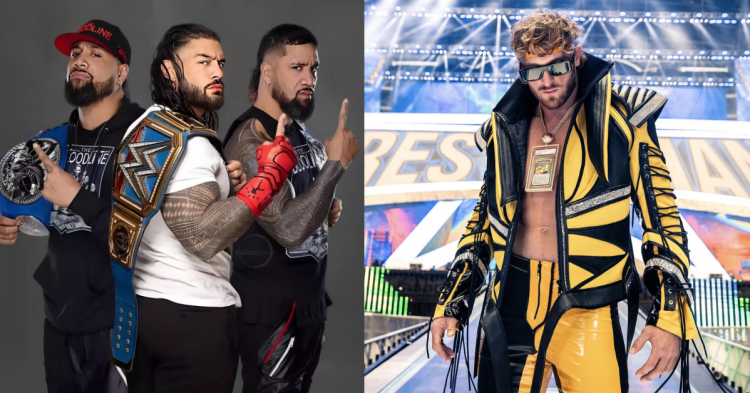 The Bloodline is one of the most dominant factions in the current WWE Roster. "The Tribal Chief" Roman Reigns and The Usos have dominated Smackdown for more than 800+ days now. This article will look at the top 5 Superstars who could join The Bloodline.

The Bloodline is one of the most dominant factions in the current WWE roster. “The Tribal Chief” Roman Reigns and The Usos have dominated Smackdown for more than 800+ days now. After grabbing the Universal and WWE Championship Roman has established himself as the Top Singles competitor meanwhile the Usos have managed to Unify the Blue and Red Brands Tag Titles.

This article will look at the top 5 Superstars who could join The Bloodline.

“The Monster Among Men” Braun Strowman made his anticipated return on the last Monday Night RAW. Braun and Roman have a history together before Braun was drafted to RAW and was released later. Many wrestling pandits have predicted an angle for a Strowman vs Roman feud. With Triple H now the Head of Creative it is uncertain what could the feud lead to. One possibility is that Braun would join The Bloodline although this angle wouldn’t lead to any interesting storyline you never know.

Yes, this might come up as a surprise for many of you but this could still happen. Kevin Owens is expected to get a huge push by the New WWE regime, as it is well known that Papa H has always been a fan of the “Prize Fighter” Kevin Owens. Kevin’s Best Friend Sami Zayn is a part of The Bloodline ‘kinda’, many fans are speculating an angle where Kevin Owens shakes hands with his Best Friend and aligns himself, and become “One”.

After it was announced that Logan Paul will be taking on Roman Reigns at Crown Jewel in Saudi Arabia, there were mixed reactions from the fans and the wrestling world in general. Logan Paul has shown good potential for becoming a Pro-wrestler and his in-ring capabilities were praised. Although Paul isn’t the most liked person on the internet certainly is a big draw and after all, WWE is a “Sports-Entertainment Company”.

It's on at #WWECrownJewel on Saturday, November 5 as @LoganPaul challenges @WWERomanReigns for the Undisputed WWE Universal Championship!

Tamina ought to be a no-brainer for The Bloodline. Her strength and toughness would end up making her the invincible female of the group even if she had no relationship with Roman Reigns’ family. Tamina has been in WWE for a long time and definitely deserves more screen time and her current character is a perfect fit for The Bloodline.

Naomi should have been a part of The Bloodline a very long ago. Apart from being the wife of Jimmy Uso, Naomi has the charisma and can pull off the character work needed to be with the Tribal Chief. She had a good reputation backstage and was beloved by the authority before her Walk-off with Sasha Banks. We still hope for her return to the WWE and hopefully, we see her joining The Bloodline.