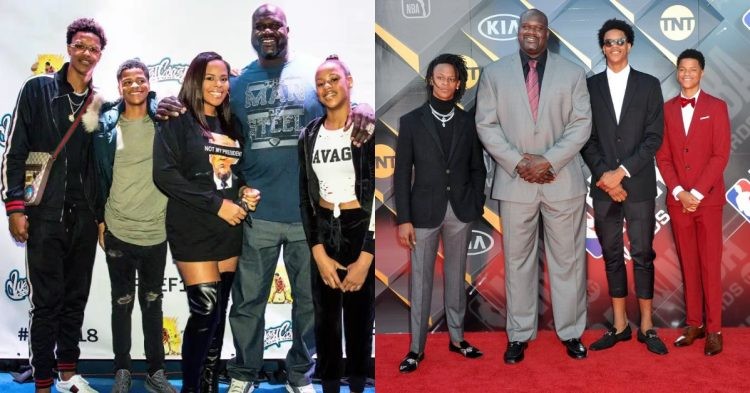 Shaquille O'Neal with his kids (Credit- US Weekly & Newsweek)

Shaquille O’Neal has been one of the best NBA players to ever grace the game. Apart from being one of the most dominant players on the court, Shaq has also built a business empire off the court. His net worth stands at $400 million, as of 2022. With profitable investments in various companies like Five Guys, Apple, Google, and Papa John’s, Shaq has amassed a vast amount of wealth.

Shaq currently has six kids, three of which are daughters and three sons. One might assume that Shaq’s wealth will be directly going to his kids, considering how rich he is. However, the 50-year-old has publicly claimed that it would not be the case in his household.

A while ago, O’Neal mentioned on TheEllenShow, “My most famous rule is, in order to touch any of my cheese, you have to present me two degrees…Cheese means money. So their father is very successful. So as a father, I’m not going to give them handouts. They have to get a bachelor’s and a master’s.”

Many might disagree with Shaq’s opinions at times, but his ideology on parenting is one every father would agree with. As an extremely successful dad, O’Neal claims his children would have to work hard and prove themselves by attaining degrees to inherit his money.

Last year, Shaq spoke about something similar too. On the Earn Your Leisure podcast, he mentioned, “My kids are older now. They’re kinda upset with me. Not really upset, but they don’t understand. I tell them all the time. We ain’t rich. I’m rich.”

“I don’t care if you play basketball. I don’t care about none of that. Listen, I got six kids. I would like a doctor, somebody to own a hedge fund, a pharmacist, a lawyer, someone that owns multiple businesses, someone to take over my business. But I tell them I’m not going to hand it to you. You gotta earn it,” the former LA Lakers star added.

One of his sons, Shareef O’Neal, is currently a professional basketball player. He defied his dad and chose to enter the NBA Draft. The 22-year-old said, “He wanted me to stay in school”. It seems like Shaq’s wishes of seeing his son get a degree may not come true after all. However, a few of his other children are still studying to get their degrees.