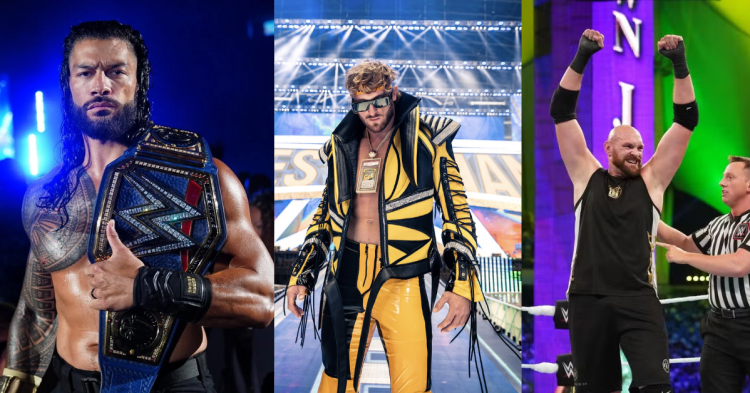 WWE has confirmed that they will return to Saudi Arabia for their annual show "Crown Jewel" on November 5, 2022, live from Mrsool Park in Riyadh. Crown Jewel can be considered the second biggest WWE premium live event after Wrestlemania. So far WWE has only confirmed one match for the event, and it's "The Tribal Chief" Roman Reigns vs Logan Paul.

WWE has confirmed that they will return to Saudi Arabia for their annual show “Crown Jewel” on November 5, 2022, live from Mrsool Park in Riyadh. Crown Jewel can be considered the second biggest WWE premium live event after Wrestlemania. WWE has managed to deliver some great dream matches involving the likes of Triple H, The Undertaker, Brock Lesner, and many more. This year let’s see what the WWE is set to bring us to the table.

It's on at #WWECrownJewel on Saturday, November 5 as @LoganPaul challenges @WWERomanReigns for the Undisputed WWE Universal Championship!

So far WWE has only confirmed one match for the event, and it’s “The Tribal Chief” Roman Reigns vs Logan Paul. Logan Paul made his WWE in-ring debut at Wrestlemania where he and The Miz took on the Mysterios in a Tag Team Match. Logan was later attacked by his partner The Miz which later was a build-up to Logan’s first Single’s match at Summerslam later. Logan has shown some great in-ring work and has been praised by fellow superstars too.

Logan Paul is an official WWE Signee which means he is going to have more matches to come. Logan is definitely a big Social Media star which draws more teenagers and young audiences towards the WWE. Putting him against Roman Reigns at Crown Jewel is great money drawing match according and will also establish Logan as a part of the Roaster.

Here Are 5 Matches That Could Be Announced for Crown Jewel

After a Defeat from Bianca Belair, Becky Lynch turned face at Summerslam but was later ruled out due to an Injury. The same night Bayley made her anticipated return along with Dakota Kai and Iyo Sky. Bayley has been represented as a legit threat to Bianca’s Title and is also set to have a Feud with her. Becky is definitely one of the most over Female superstars in WWE right now so her return at Crown Jewel will have a huge crowd pop.

This match might be on everyone’s Dream match list, the two best Wrestlers of their Eras fighting off at the Crown Jewel. The Judgement day attacked EDGE viciously on RAW last week, and EDGE is set to be written off of TV for short time. It is speculated that EDGE will return and challenge the leader of The Judgement day at Crown Jewel.

“The Olympic Gold Medalist” Kurt Angle made his return to Monday night Raw and had some fun with the Street Profits. Kurt retired from in-ring action but has been teasing a return for some time now. There’s a possibility that we might see him in action at Crown plans have been pitched but no opponent has been named so far.

Max Dupri or LA Knight as back in his NXT Days, has been teasing bringing his NXT Persona back on the main roaster. Many fans have literally hated the idea of him being Max Dupri and look like HHH has listened once again. Mansoor is from Saudi Arabia thus having him on the match card is a must and LA Knight seems to be the perfect opponent for him right now.

After Tyson Fury knocked out Austin Theory at Clash at the Castle, there are few speculations that the Gypsy King might come back at Crown Jewel and get his Hand on Theory, again. Although the chances are less as Tyson Fury is set to fight in December against Anthony Joshua and might not have time to train for a wrestling match in November.