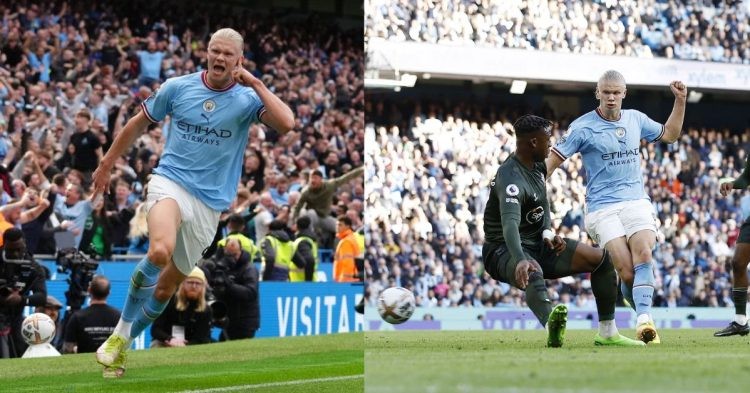 There have been many standout performers in football in the 22/23 season. But one player that has taken the entire world by storm is Manchester City superstar Erling Haaland. He joined The Citizens from Borussia Dortmund this summer. The Manchester-based club paid the £51 million release clause to BVB to bring the Norwegian to the Etihad stadium.

Since joining the club, Haaland has been the best-ever version of himself so far. He has bagged multiple hat-tricks, one including City’s arch-rivals Manchester United. In that game, another young star, Phil Foden, also brought home the match ball. This sent a warning to the rest of the Premier League teams, indicating that the Haaland-Foden partnership was deadly.

The Man City no.9 has been breaking records with ease so far. As City played against Southampton today, Joao Cancelo, Foden, and Riyad Mahrez all found the net. Amid his electrifying form in recent times, many were expecting Haaland to get on the scoresheet at some point in the game. And indeed he did, in the 65th minute. He extended City’s lead as the game ended 4-0 for the hosts.

How many goals has Erling Haaland scored so far this season?

The goal against The Saints was Haaland’s 15th in the Premier League and 20th across all competitions. It seems like he is trying to wrap up the race for the Golden Boot with games left to spare. If that wasn’t enough, the 23-year-old has broken yet another record with his goals. He is now only the second player in Man City’s history to score in ten consecutive games after Billy McAdams.

Only two players in Manchester City’s history have scored in TEN consecutive games:

Once in a Blue Moon… pic.twitter.com/Ix1LwIdrhi

Billy McAdams was a Northern Irish striker who played for various teams throughout his career. Back in the day, he joined Manchester City in 1953, after leaving Lisburn FC. Although his goals for the club are unknown, McAdams scored 33 goals in 49 games in the First Division in the 1991/1992 season, according to Transfermarkt.

The former Dortmund striker has been in the spotlight recently, after having his wages at Man City revealed. In addition to that, his form in front of the goal has truly been scary for opponents. Haaland certainly looks to be a huge favorite to break the record for most Premier League goals scored in a season. Liverpool’s Mohamed Salah holds the record with 32 goals for a 38-game season.