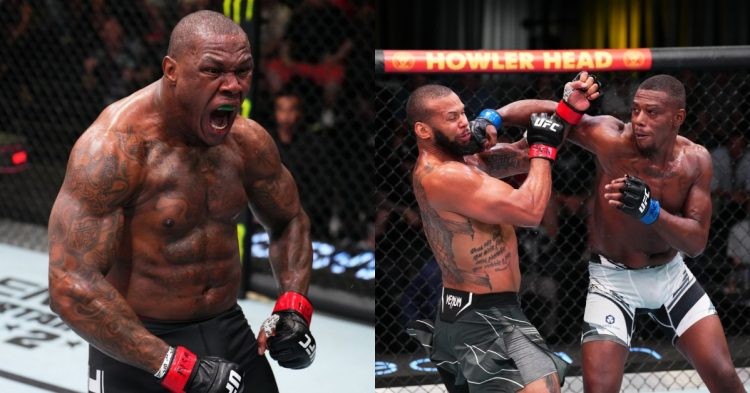 Despite a lack of star power, UFC Vegas 59 was a massive success for the company. After a few back-to-back high-profile events, UFC was back in Apex for the Fight Night event headlined by Thiago Santos and Jamahal Hill. Although there wasn’t much fan excitement for the event, it delivered big.

The event had a total of 10 fights on the main card and preliminary card combined. In a rare occurrence, all 10 fights ended in a finish. While it had 3 submissions, the rest of the 7 fights on the card ended in KO/TKO. It became only the 10th event in UFC history to feature a finishing rate of 100%.

But as the sport evolved, it became harder and harder to keep up the rate. Hence, UFC 40, TUF 5 finale and UFC Fight Night 55 were the only 3 events prior to the recently concluded UFC Vegas 59 to have a 100% finishing rate. (Stats via MMAHistoryToday)

The event started off with a women’s bantamweight contest between Mayra Bueno Silva and Stephanie Egger. Despite the initial burst of action from Egger, Silva secured the submission at 1:17 minute of the first round and tapped Stephanie out with an armbar.

It was followed up by Cory McKenna vs Miranda Granger. McKenna dominated the contest and ended up submitting Granger in the second round via a Von Flue Choke. The Ultimate Fighter 29 winner Bryan Battle knocked out Takashi Sato on his welterweight debut. The card was rounded by Sam Alvey vs Michal Oleksiejczuk, which ended with Michal knocking out Alvey in the first round.

Terrance McKinney is DIFFERENT in Round One #UFCVegas59 pic.twitter.com/3xVhfJK8kK

The main card opened with Terrance McKinney taking on Erick Gonzalez. As expected the bout started with both fighters on the front foot trying to knock each other out. But McKinney changed his game plan soon after getting rocked on the feet and took Gonzalez down. His grappling paid off as he submitted Erick via rear-naked choke in the first round. He called out Paddy Pimblett afterwards.

Sergey Spivak had a very dominant performance over Augusto Sakai. He landed 86 strikes as opposed to only 14 from Sakai. Spivak eventually got rid of Augusto in the second round with strikes.

The other TUF finale was in the heavyweight division between Mohammed Usman and Zac Pauga. Usman knocked out Pauga in the second round to earn the UFC contract. He has become the second Usman brother to grab The Ultimate Fighter trophy as his older brother Kamaru Usman was the winner of TUF 21.

In the co-main event of the night, Vicente Luque suffered the very first knockout loss of his career. He was hurt badly in the first round against Geoff Neal and was eventually finished in the third round in a violent manner.

SWEET DREAMS ARE MADE OF THIS! @JamahalH closes the show on a HISTORIC #UFCVegas59! pic.twitter.com/9xuVa7jw3u

All eyes were on the main event and it did not disappoint. Thiago Santos and Jamahal Hill had a great back-and-forth brawl. Santos was much more calculative than usual in the beginning. But Hill kept on putting pressure on Santos and the former title challenger eventually succumbed to the pressure. Jamahal HiIl extended his win streak to 3 fights in a row with the win. He called for the title next.