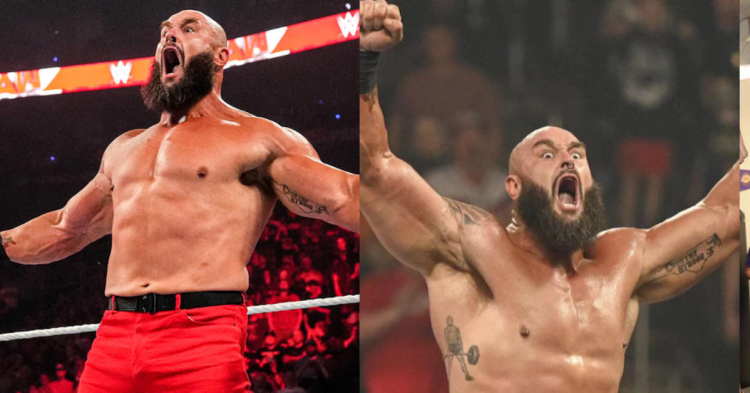 WWE returns to Kansas City, for Monday Night Raw. A fatal-4-way match is announced to determine the number one contender for The Men’s Tag Title. The Street Profits vs. Los Lotharios vs. Alpha Academy vs. The New Day is booked for the matchup. The Match ended up with a no-contest because the rumors came true, “The Monster Among Men” Braun Stowman made his WWE return and everyone “Got this Hands”, no pun intended.

BRAUN STROWMAN BACK IN @WWE pic.twitter.com/6u7br60awJ

Midway into the bout, Strowman entered and started a vicious attack on each of the eight superstars. When three WWE security personnel attempted to remove The Monster Among Men from the ringside, they were also met with Strowman’s fury. Braun Strowman was always presented as the Unstoppable force prior to his release from the company. Many fans and Pro-wrestling often regarded him as “The Next Big Thing” in WWE.

Braun Strowman is back in WWE and looks absolutely shredded, holy shit.#WWERaw pic.twitter.com/igp95pSVec

For those keeping track, Triple H has officially brought back the following Superstars:

Huge Plans for Braun Strowman After His Huge Return To WWE

Vince’s love for big Giants is well known within the industry and he made sure to present Braun Strowman as the next “Big Show” which was widely criticized as Braun was not regarded as a Good ‘In-Ring’ Performer.  Many people were unarguably shocked when Braun Strowman was fired from WWE previously last year because he was a prominent figure in the organization.

After the Return of Strowman on Last Monday night Raw, many fans are speculating about him being added to the Undisputed Championship picture against the Undefeated Roman Reigns. After Romans’ return as The Tribal Chief, he had a feud with Braun where Roman defeated him. Braun certainly has some unfinished business with the Tribal Chief.

With names like Cody Rhodes and Randy Orton out because of injury and Roman ‘smashing’ every legit main-eventer in the WWE, Braun can be the next in line for a feud with roman over the WWE Universal Championship.

Fans speculate that Triple H may be planning to set up Braun Strowman and Omos to engage in a feud among all the possible picks that WWE might select from its extensive roster. After Braun Strowman leaves WWE in 2021, the superstar from Nigeria has been cited as the organization’s top “big man.”