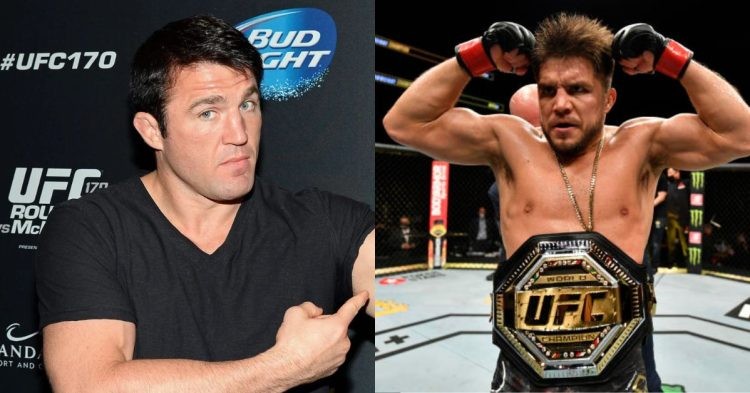 Henry Cejudo has stated that he’ll be making his UFC return soon. But there have been no updates from either the UFC or Cejudo on his possible opponents.

The relationship between Henry and the UFC has been a little rocky these past months. To make a comeback, ‘Triple C’ will have to improve communication with UFC president Dana White, and Hunter Campbell.

UFC legend Chael Sonnen appeared during a recent conversation posted on Cejudo’s YouTube channel and dropped a bit of advice to impress White:

“I will tell you, there are two moves that he [Dana White] respects. This will get you a long way – A handwritten letter. Has to be handwritten, don’t type it out.”

Chael is known for his mic skills and built his career introducing the art of trash talking long before Conor McGregor came to the UFC. The intention was for joking or not can’t be determined. Sonnen added:

“Has to be a handwritten letter. And the other one that he respects is that you show up to his office and you don’t have a meeting, and you refuse to leave… You might have to spend the day there, but you’ll get that meeting before he leaves.”

The UFC president seems to be on a different page than Cejudo since ‘Triple C’ announced his return. Both the opponent and weight division still haven’t been finalized but Henry has a couple of opponents in his mind.

Former two-division champ Henry Cejudo is coming back to the UFC with one goal in his mind – to become the first three-division champion in the UFC. Since the start of this year, Henry has been adamant about making his return and has been asking the UFC and Dana to make it happen.

Earlier, Cejudo has been quite vocal about a fight with Volkanovski. But he will have to make his way at his old bantamweight to take on featherweight champion Alexander Volkanovski. In a recent interview, Henry stated his desire for the title. He said:

“These dudes are not on my level. None of those dudes are at my level. And they all know it. So if I have to go down to 135 pounds and win back my belt to challenge Alexander Volkanovski, that’s what I have to do,” Cejudo added.

‘Triple C’ has not fought since his retirement after his win over Dominick Cruz at UFC 249 in May 2020. He ended his career with six straight wins, capturing the flyweight and bantamweight championships in the process. Talking about his quests, Cejudo said: “I left, I relinquished my belt. I was never stripped…I’m here to make history.”

Ahead of making his return, the 35-year-old entered the USADA drug-testing pool. He will be eligible to fight again in October.