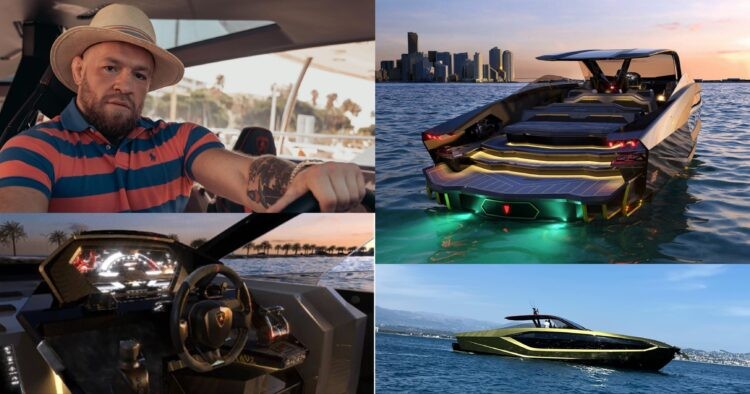 Conor McGregor and his luxury yacht. (Images via Twitter)

UFC superstar Conor McGregor bought a luxurious Lamborghini  Yacht in 2021. The posh yacht is known as the ‘supercar’ for the sea. Tecnomar for Lamborghini 63 is a very special limited edition of yachts. The number ’63’ is attached to the name to honour the company’s foundation in 1963. Only 63 editions of this particular model were made available for the public to buy.

As per a report, McGregor apparently spent $4 million to buy the yacht. He also spent an additional $500,000 to customize it to his taste.

Being able to afford such expensive items is not much of a problem for Conor McGregor. He is reportedly worth $200 million according to CelebrityNetWorth. He also became the highest-paid athlete of 2021 over the likes of Canelo Alvarez, Cristiano Ronaldo and Leonel Messi. McGregor often posts pictures of his yacht and he loves spending time in the sea.

There’s the lambo. Going sideways at 120km an hour. Ones a house to live on. The others a super car of sea. To rally on pic.twitter.com/JwnBLMER7v

However, this is not the only ridiculously expensive item under his name. Following his loss to Dustin Poirier in UFC 257, Conor bought a watch from UAE that was worth $ 1 million. He also owns many supercars that he often takes out on the roads of Dublin.

Conor McGregor’s rise to the top of the UFC

Conor McGregor is the richest Mixed Martial Artist of all time. Hailing from Crumlin, Dublin, The Notorious made his MMA debut in 2008. He became a two-division champion in Cage Warriors. It perfectly laid out the foundation for him to join the UFC in 2013. He defeated Marcus Brimage on his UFC debut via TKO in the very first round.

It did not take him much time to start climbing the ladder to the top of the division. McGregor went on to beat Dustin Poirier, Max Holloway, Chad Mendes and Jose Aldo amongst others in his 7-fight win streak in the UFC. But more than his impeccable record, Conor’s brash personality and his smooth mic skills swept the audience off their feet. It resulted in more and more revenue for the UFC as well. As a result, a Conor McGregor fight card became the most sought after event in the UFC.

Needless to say, the more the audiences bought Pay Per Views (PPVs) featuring him in the headline, the richer he became. Conor’s foray into the Octagon against Jose Aldo reportedly sold 1.4 million PPVs. He soon became a crossover star as McGregor became the very first MMA fighter to fight Floyd Mayweather in the boxing ring. It became the biggest payday of his career. McGregor reportedly made $130 million for his boxing debut. The event also became the second highest-selling PPV of all time with a reported 4.3 million PPV sales. The same report stated that the event generated a revenue of $600 million.

Following that mega event in 2017, Conor McGregor created another UFC record in 2018. His feud with former UFC Lightweight Champion Khabib Nurmagomedov generated 2.4 million PPV buys. It is the highest-selling UFC/MMA PPV to date. McGregor has sold 9 PPVs exceeding 1 million buys in his career so far.

Conor has always excelled in the business side of things as well. During his press tour in 2018, McGregor launched his own brand of whiskey called ‘Proper 12’ ahead of his fight against Khabib at UFC 229. It was a monster success and he sold the brand in 2021 for a reported amount of $600 million.

When will Conor McGregor fight next?

Earlier, reports suggested that Conor McGregor may very well fight in the summer of 2022. Conor himself was eyeing a return for the international fight week. But UFC president Dana White later clarified that the 33-year-old will not make his comeback until the last quarter of the year. Conor suffered a horrific injury during his trilogy fight against Dustin Poirier at UFC 264. Hence, Dana White’s concerns regarding Conor’s full fitness are justified.

As for an opponent for his comeback fight, Conor McGregor is not lacking in options. During UFC 274, both Charles Oliveira and Michael Chandler expressed their wish to fight him. McGregor previously stated interest in fighting the UFC welterweight champion Kamaru Usman as well. On top of that, he has the option to fight Nate Diaz and Dustin Poirier whenever he wants to due to their pre-existing history.

Who do you think Conor McGregor will fight upon his return? Will he face Charles Oliveira for the vacant 155lbs championship? Or a bout against Michale Chandler seems the most logical next step for him? Let us know your pick in the comments down below.