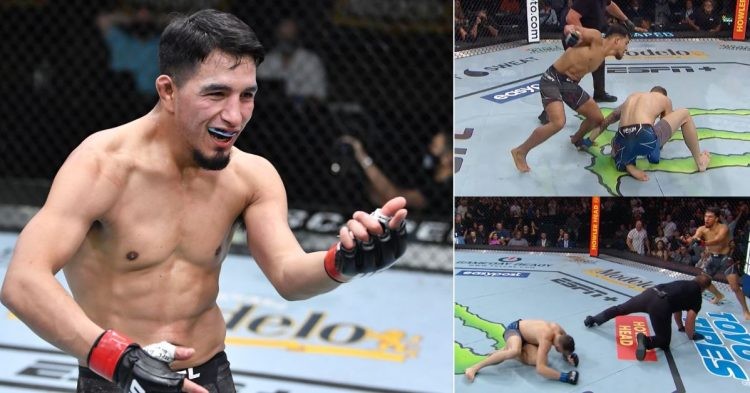 There was a lot of buildup to Adrian Yanez vs Tony Kelley at UFC Fight Night: Kattar vs Emmett, not because of the surging Yanez’s rise in the UFC, but also because of Kelley, who made headlines for all the wrong reasons the last time he was inside the Octagon.

Kelley’s words to fighter Andrea Lee drew a lot of flak from fight fans around the world after he was caught on the microphone, mouthing foul words to Lee’s opponent Viviane Araujo. “That’s what they’re gonna do. They’re dirty f******* Brazilians. They’re going to f***ing cheat like that.”

Needless to say, ahead of his fight at UFC Austin, Brazilian fans came pouring in to support Adrian Yanez, including welterweight contender Gilbert Burns.

After a heated face-off that saw Dana White restrain both the fighter, on the night of the fight, Kelley walked out to the Octagon flipping the bird on the Austin crowd as Yanez made his way to the cage with a huge pop from the audience.

When the time came, it was Adrian Yanez who got the last laugh as he stopped Tony Kelley in the third minute of the very first round in what was an impressive performance from the Texas native. With a chip on his shoulders, Yanez had a lot to prove, not just to his home crowd of Texas, but also to his Brazilian fans.

“Honestly, it was cool, calm, and collected for me,” Yanez said after the fight.

Both Yanez and Kelley took the first few minutes to gauge each other and as soon as that was done, the duo engaged in a firefight which eventually ended with Kelley on the canvas. Yanez’s response to Kelley’s kick with a left hook was something to behold, and his incredible body shots certainly made the difference.

YEOOO!!! That was FILTHY!!! My guy wants some more!!! Adrian Yanez is the real deal ladies and gents! Just incase you didn’t know that yet! #UFCAustin

With the victory, Yanez called out the likes of Sean O’Malley next to a huge uproar from the Texas crowd. Sean O’Malley is set to take on Pedro Munhoz at UFC 276 next month. Needless to say, if O’Malley vs Yanez is booked, it’s certain to get the attention of fight fans around the world.