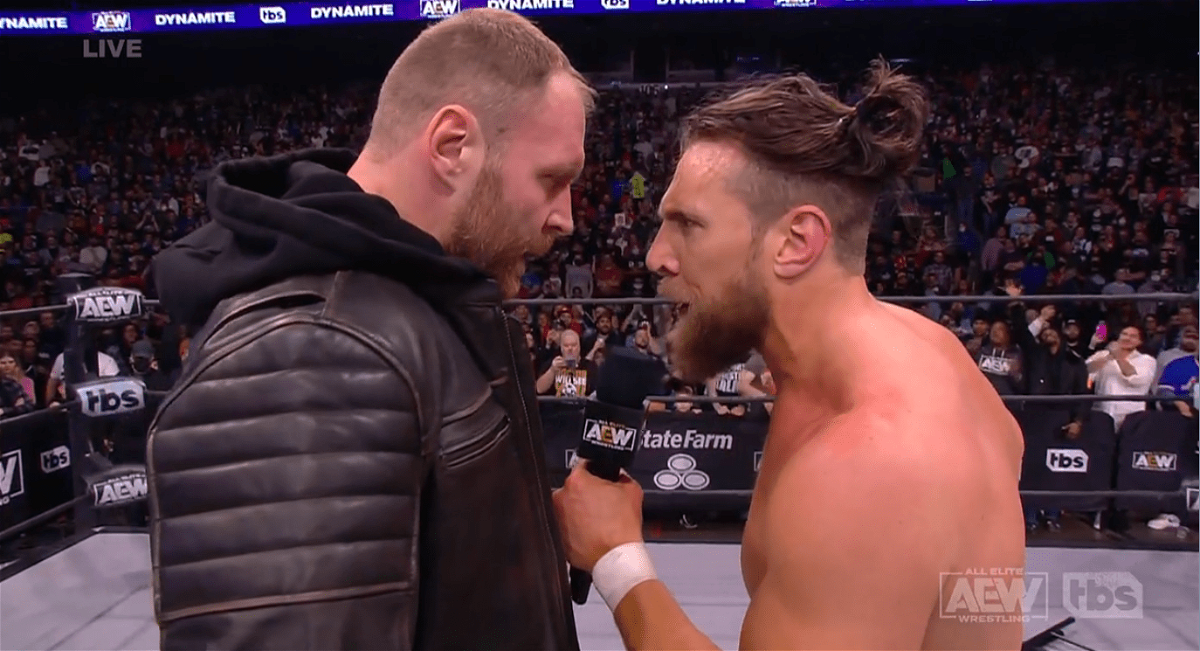 It’s official; Jon Moxley will bleed beside Bryan Danielson at AEW Revolution taking place on March 6th in Orlando, Florida. The “Wild Thing” has taken AEW by storm since his return from an inpatient alcohol rehabilitation program. Bryan Danielson has been churning out great matches like a 5-Star Factory since he became All Elite last September. The pair are set to determine just exactly who is the Greatest Purveyor of Violence in AEW; and the fallout is guaranteed to shake the promotion to its very core. Here are 5 Possible Outcomes to the match-up, which was confirmed on AEW Dynamite last night.

While it seemed like this outcome would be impossible except in a trios match, Hangman Page has proven otherwise. Mox has been undefeated since he returned to the promotion. A win over Danielson would extend his winning streak to 5-0, and drive The GOAT insane with envy.

Heel Bryan Danielson is something AEW fans have been clamoring for, and if Mox beats him without dirty tactics, it just might push him over the edge. A summer-long feud with Face Moxley and Heel Danielson sounds like blockbuster to us.

And of course, it could go the other way as well. Though Moxley turning heel is not something we can see happening. Bryan Danielson choked out Daniel Garcia with a Triangle Sleeper on last night’s Dynamite, and has made it a point to show-off his wrestling acumen since leaving WWE. One slip-up, and Mox will be put to sleep before he can say “bleed” again. But while that will leave Moxley open for exacting his revenge, there’s another way that could put him on the injured list instead.

AEW is notorious for booking proper finishes. Only 2 matches had ended on DQ in its first couple of years of existence. That trend has changed in 2022, though. CM Punk infamously cucked MJF in his match with Captain Shawn Dean, handing the Salt of the Earth a loss as a New Year’s present.

This match could take the Mercedes Martinez route, though, and see Danielson lose his composure. Mox is a warrior who doesn’t know when to quit, and that frustration might just tip him over the edge. It’ll make the eventual re-match that much better. But there’s another way this might end, and it isn’t pretty at all.

With every debut, the AEW Trios Titles come that much closer to becoming a reality. Mox and Danielson have both laid out the trio of youngsters on numerous occasions. This could be the moment that turns them into AEW breakout stars. Ambushing Moxley and Danielson during a match that has been in the works for over 2 months is sure to draw the kind of heat that Garcia and 2.0 need to propel themselves to the next level. Of course, Jon and Bryan will need to find a tag-team partner. Speaking of which…

1. Moxley and Danielson fight to a time-limit draw; join forces

This whole thing started with Danielson wanting to start a stable of legitimate fighters in AEW alongside the Purveyor of Violence. If you think about it, this outcome only makes sense. AEW has made it a point to use time-limit draws to tell a compelling story. Darby Allin’s heroic outing against Cody Rhodes, and both of Danielson’s time-limit draws have legitimized AEW as a company that builds professional wrestlers. Mox and Bryan will have 60 minutes to bleed together, and after they have, make the rest of the AEW locker room follow suit.

Regardless of how the outcome, the match itself is one of the most-anticipated encounters on the Revolution PPV card. AEW will soon have not one, but two Purveyors of Violence loose amidst its personnel; and maybe, just maybe, they’ll pick up a disciple or two along the way.