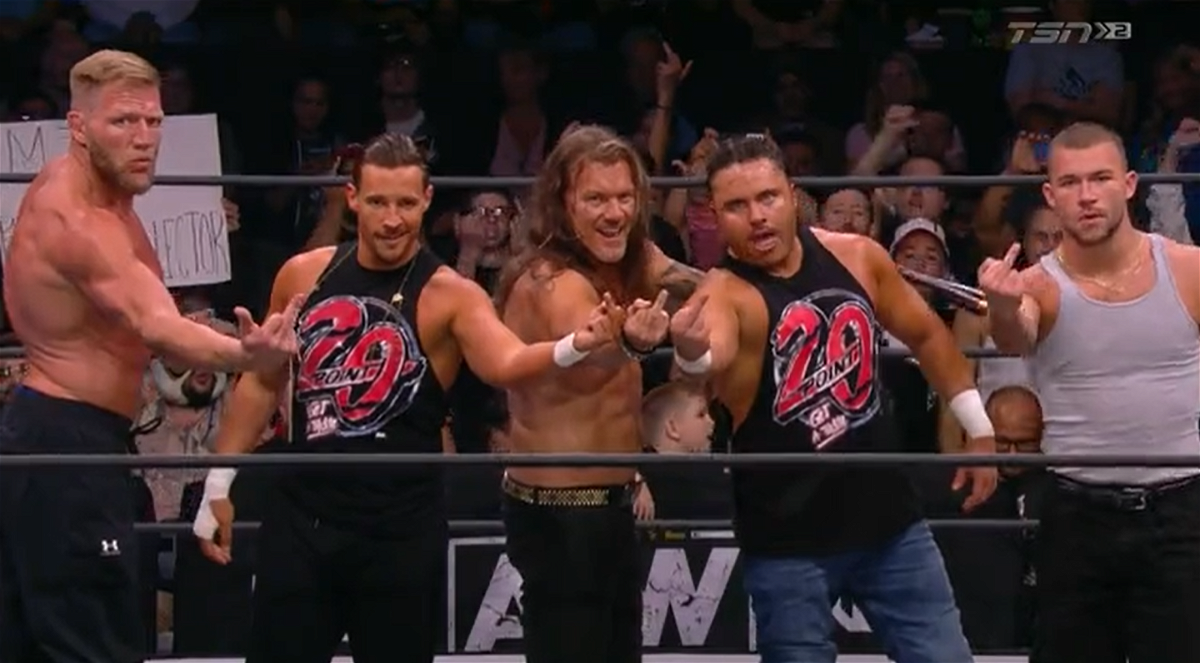 Well, The Inner Circle is officially over. After putting on an amazing opening match with Eddie Kingston at AEW Revolution, Chris Jericho promised he’d shake Eddie’s hand tonight. The Demo God did do that; and then proceeded to introduce Kingston, Santana & Ortiz to his friends 2point0, Daniel Garcia and Floyd. Jericho has been teasing a turn since 2022 began, and it looks like he’s finally going to get the appreciation he thinks he deserves.

Alright let’s hear it. What’s @IAmJericho going to say according to your ???? pic.twitter.com/pajkZCjTdt

The Inner Circle’s dissolution has been slow & painful. Sammy Guevara has been off doing great things with the TNT Championship since he first won it in September. Le Champion always has something or the other going on for them. And come New Year’s Smash, Proud n Powerful would start to splinter off and come into their own as well.

The Mad King has history with PnP that goes back to their days as LAX. Kingston didn’t appreciate Jericho’s show-stealing save and has been on a heated collision course with him ever since, which has seen Santana & Ortiz seemingly choose their friend over their “boss”. And if you know anything about Chris Jericho, you know that isn’t gonna fly with him.

The rivalry between The Mad King and The Demo God is all about egos. Jericho has been at the top of the wrestling world for 30 years. Eddie Kingston had to grind his bones to get to where he is today. Neither of them like each other in real life, so the rivalry only made sense. Jericho has been calling himself  “The Influencer” in AEW for a while now, and we can’t fault his claim to the title.

All Elite Wrestling owes a lot of its relevance to Le Champion, the first AEW World Champion, and the first certifiable draw that the company signed. Kingston, on the other hand, is over with the fans no matter what he does because his connection with them is special. At Revolution, these opposing forces make to a head in a fantastic match-up which was the best performance Chris Jericho has put on in a VERY long time. But after Eddie made him tap out, The Influencer refused to pay his due and shake his hand. He made a big deal out of it, too, and posted this on Instagram.

It’s Wednesday and you know what that means! #AEWDynamite is LIVE on @tbsnetwork right now! @IAmJericho is here after the fallout from #AEWRevolution! pic.twitter.com/fDN2d2lmA8

After shaking Eddie Kingston’s hand and cutting a fantastic, respect-filled promo in favor of The Mad King, Jericho was attacked alongside his Revolution opponent by 2point0 and Daniel Garcia. But as the beat-down continued, it became clear that their targets didn’t include Le Champion.

What a way to start #AEWDynamite tonight! After @IAmJericho finally shakes @MadKing1981‘s hand, #2point0 and @GarciaWrestling cause mayhem and @Santana_Proud and @Ortiz_powerful come in to intervene! What is going on?! We are LIVE on TBS right now! pic.twitter.com/bnkubsyJ8s

The three upstart wrestlers started beating down on the 2 men in the ring and PnP ran in to make the save. But while they were prepared for a face-to-face throw down, they weren’t ready for a stab in the back. Jericho shockingly joined forces with 2point0 and Daniel Garcia, bringing Big Hager along with him to form the Jericho Appreciation Society. The 5 men laid out Eddie Kingston and then Jericho & Hager draped Santana & Ortiz with their Inner Circle jackets.

What have we just witnessed here with @IAmJericho, @RealJakeHager, #2point0 and @GarciaWrestling?! Watch #AEWDynamite LIVE on TBS right now! pic.twitter.com/qBkXO02N3w

It looks like we’re building towards a full-blown civil war between the JAS and the former members of the Inner Circle & Eddie Kingston on the Road to Double or Nothing. This will be the third faction war in AEW that Jericho has been a part of, in similar vein to his battles with The Pinnacle and The Elite. The Influencer continues to inspire the masses with his never-ending creativity and at the age of 51, Chris Jericho might be embarking on the run that will define his legacy for years to come.