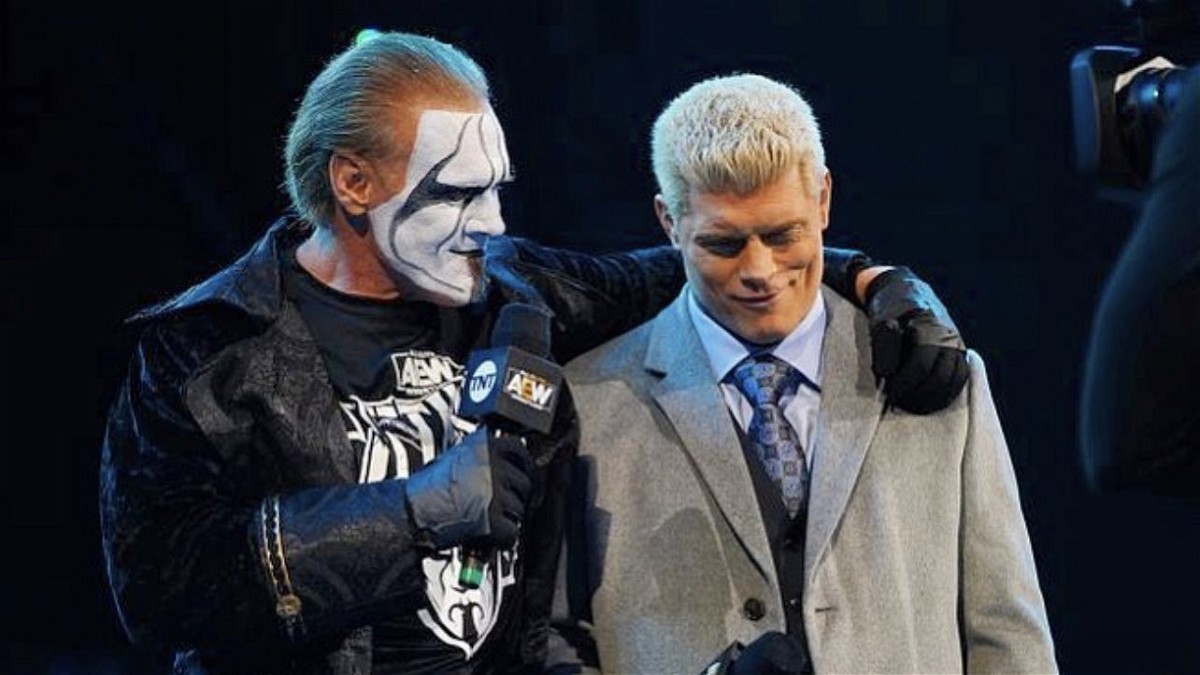 At the young age of 62, “The Icon” Sting is on what is possibly the run of his life; and yes, that includes TNA. The Franchise of WCW has been appearing regularly on TNT programming once again over the past year or so, as a mentor to AEW’s hottest young prospect so far. And now, Sting has taken the time to acknowledge the departure of another one of his “mentees”; Cody Rhodes.

“The Icon” debuted in All Elite Wrestling back in 2020

For a while, it really seemed like Sting was done with professional wrestling. He retired in 2016 after sustaining a career-threatening neck injury at the hands of Seth Rollins at 2015’s Night of Champions PPV. He actually announced his retirement during his Hall of Fame acceptance speech, which came as a bit of a shock to people.

Why? Because Sting himself didn’t really want to retire! In a WWE.com exclusive conducted a few days after the match, Sting stated his desire to continue wrestling despite knowing the risks. However, with WWE enforcing its Wellness Policy more stringently than ever, he knew he had little-to-no chance of returning to in-ring competition. At least, in that company.

On December 2nd, 2020 after a tag-team match that saw Cody Rhodes and Darby Allin pitted against Team Taz, Sting walked out into Daily’s Place for the first time.

AEW immediately announced that he’d been signed to a multi-year deal; and the best part? He was going to wrestle.

Sting “schooled” Cody in their first interaction on live TV

There’s a reason why Sting is revered in the wrestling business. He’s been actively wrestling since 1985; that’s 14 years more than most of us have even been alive for. He’s your favorite wrestler’s favorite wrestler; Tommy Dreamer wanted to be him, John Cena wanted to look like him and Windham Rotunda would fight Sting outside a Waffle House if he could.

Cody Rhodes also happens to be one of the people who idolized Sting growing up. So you can imagine how surreal it must have been to be inside the ring with his icon, and then imagine the heartburn he felt when he just straight-up roasted him!

The first interaction between Cody Rhodes and Sting could not have been more perfect, and fans were really invested in a rivalry between the two. Sadly, it just wasn’t meant to be.

Though there is a LOT of speculation about the real reason for Cody’s departure, there’s one person who isn’t afraid to acknowledge the efforts he’s put into helping build AEW; and that’s Sting. Taking to Twitter yesterday, The Icon posted a short yet heartfelt message for The American Nightmare, saying;

Much love and respect for you Cody. ???? pic.twitter.com/V1ja7ywOwo

Sting is Cody’s favorite wrestler of all-time, edging out even his own father in his personal rankings, so this kind of support must mean a lot to him. Especially now, given the situation, Cody finds himself in. While the full story of Cody Rhodes’ departure will be told in the coming weeks, it’s oddly comforting to see him get this kind of affirmation from The Icon himself.

Sting, meanwhile, has business to attend to himself, as he was attacked by the AHFO on Dynamite this Wednesday. Andrade El Idolo has been trying to pry Darby Allin away from The Icon for a few weeks now, but only one person knows what he is gonna get up to, and that’s Sting himself.