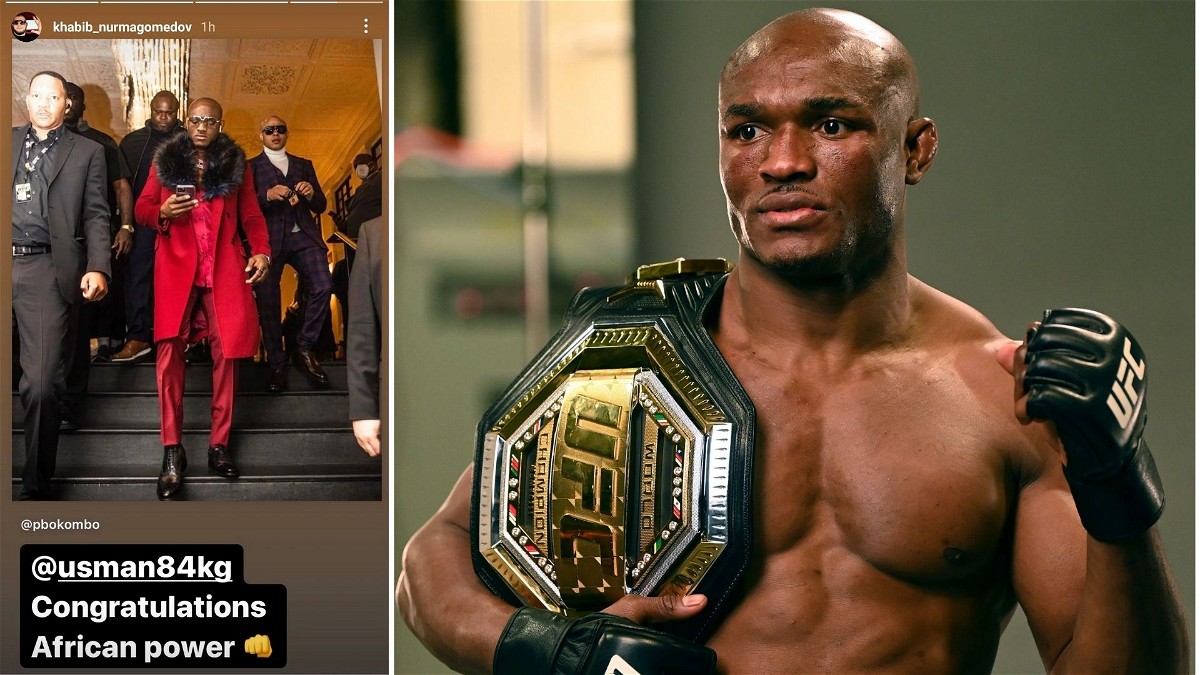 Khabib Nurmagomedov took to photo-sharing platform Instagram to congratulate his fellow friend Kamaru Usman following his emphatic win over Colby Covington. Usman put up a performance of a lifetime to earn a unanimous decision win over a tough Colby Covington in the main event of UFC 268 inside Madison Square Garden in New York. Close friends due to their time with the same management, under the Dominance MMA, Khabib Nurmagomedov took to the social media platform to extend his wishes to the undisputed king of the welterweight division, Kamaru Usman.

Can anyone stop Kamaru Usman after #UFC268?! pic.twitter.com/ps78aPGARs

In the Instagram story put out by Khabib Nurmagomedov, congratulating Kamaru Usman, Nurmagomedov hails the “African power.” Currently, as it stands, UFC has three champions from the continent of Africa. Usman reigns supreme as the pound-for-pound king and the UFC’s welterweight champion, while Israel Adesanya and Francis Ngannou rule the middleweight and heavyweight division respectively.

Usman won the fight 48-47, 48-47, and 49-46 in the judges’ scorecards, taking his record against Colby Covington to 2-0. Usman fought a fair fight, and once again it was a striking display between both the fighters, with Usman getting the better of Covington with his stiff jabs, and monstrous power. Usman dropped Covington twice in the second round, however, a tough and determined Covington was able to bounce back, eventually giving a tough fight to the Nigerian Nightmare.

#RT @espnmma: RT @SportsCenter: After a 5 round battle, and bad blood aside, Kamaru Usman and Colby Covington embrace ???? #UFC268 pic.twitter.com/0sVJZelLm4

Kamaru Usman continues to make records and with a win over Colby Covington, he added another feather to his cap. With 15 straight wins to his name, Usman is just one fight away from equalling the legendary win streak of Anderson Silva. Usman has a lot left in his gas tank, and it won’t be wrong to say that we might get to see him get past Silva’s impeccable record in the coming years.

Kamaru Usman has already moved past Georges St-Pierre for most consecutive wins in the UFC’s welterweight division, and its only time before he will solidify himself as the greatest mixed martial artist of all time.