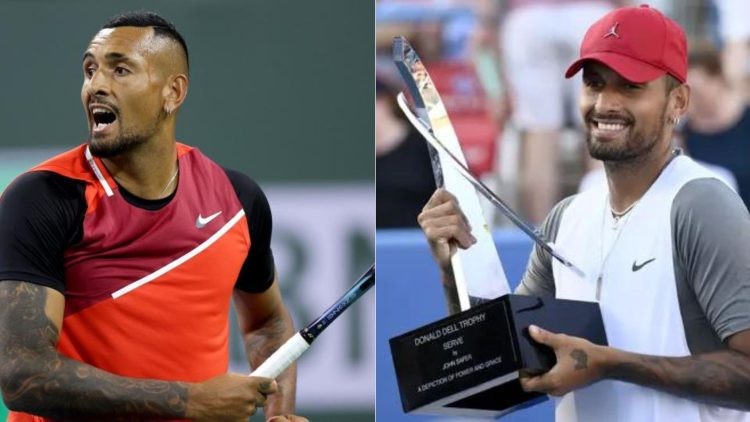 After winning the Citi Open, an ATP 500 event, Nick Kyrgios has finally reached No. 37 on the ATP rankings from No. 67. This is Nick’s highest ranking since his previous high ranking of 23 which he attained in February of 2022, which was more than two years ago.

Kyrgios has had a superb upward trajectory in 2022, he was ranked No. 137 at the beginning of the year and has already reached No. 23, even after the Wimbledon not being counted in the ranking points.

🇦🇺 @NickKyrgios rises from No. 63 to No. 37 on the ATP rankings today, his highest ranking in almost two and a half years, after winning the 7th ATP title of his career in Washington, D.C.

Nick had reached the finals of Wimbledon against Novak Djokovic, unfortunately, he lost the finals after a glorious effort. Hopefully, Nick’s resurgence in the rankings is just a beginning, especially with the US Open approaching fast.

Nick is someone who has admitted before that he does not care much about the ATP rankings since his efforts and performances do not reflect much on the ranking points.

Nick Kyrgios finally ended his three-year trophy drought and staked his claim to the Citi Open title. Nick has been in his prime form for the last couple of months and he also ended up as the runner-up in Wimbledon.

With this win in the ATP 500 title, he is all but set to enter into the top 40 rankings of the ATP. His previous title win was also from the Citi Open way back in 2019. All of these wins would be important for Nick taking into consideration the upcoming US Open which would be an important event for the Australian.

Nick thanked all the people who had faith in him after he had apparently been in a dark place in his life. He also commended his own strength and perseverance in the process. He is also extremely happy with the way he has transformed from the last year and the way in which his game has progressed in an overall manner.

He would be looking forward to winning the US Open, especially now that he has accumulated confidence from the Wimbledon and the Citi Open.