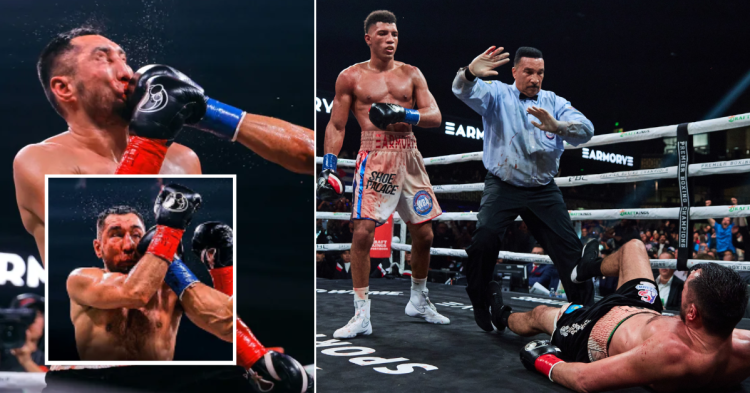 Aidos Yerbossynuly is currently in a medically induced coma for subdermal hematoma (bleeding in the brain) after suffering a brutal KO loss at the hands of David Morrell last Saturday in his attempt to clinch the WBA (Regular) super-middleweight title. The news was confirmed by Yerbossynuly’s trainer. Our prayers are with the Kazakhstani fighter, who is currently fighting for his life and good health.

24-year-old David Morrell took on Aidos Yerbossynuly on November 5 for the WBA (Regular) Middleweight title. Both the boxers were undefeated heading into the fight. While Morrell was on an eight-fight winning streak, 30-year-old Yerbossynuly had 16 straight victories to his name.

The Kazakhstani boxer did not have any answer for Morrell’s aggressive approach and looked clueless in the face of the severe damage he absorbed beginning of the 8th round. While many argued the fight should have been stopped much sooner, a valiant Yerbossynuly charged forward throughout the course of the fight. However, the damage proved to be too much for Yerbossynuly who fell prey to a thunderous uppercut that dropped him on the canvas.

“Out of respect for he and his family’s privacy, we can’t share any details but we ask the boxing community to keep him in your thoughts and prayers.” PBC spokesperson said.

Aidos Yerbossynuly was carried back by the referee, with help from David Morrell. Showtimes reported that he was taken to the hospital immediately after the bout for further evaluation. Now we hear, he has been placed in a medically induced coma.

Questions are being raised about whether the fight should have been stopped sooner and rightfully so. Yerbossynuly was knocked down in the first minute of the twelfth round, but continued despite the damage he had already endured over the course of the fight.

“Aidos wanted to continue. His head coach (Kanat Orakbaev) wanted him to continue. He evaluated Aidos and said nothing was wrong with him.” Emanuel Savoy, Yerbossynuly’s assistant trainer said.

Please send many prayers to my Muslim brother Aidos Yerbossynuly for a speedy recovery🙏🏼 pic.twitter.com/s1EcJu59aD

Aidos Yerbossynuly was 16-0 heading into the fight with David Morrell and was ranked #1 in the WBA super-middleweight rankings. A knockout artist himself, Yerbossynuly had an impressive 11 knockout wins to his name.

However, Morrell proved to be too much for the Kazakhstani fighter who just couldn’t get going. The punching stats showed a dominant outing by Morrell, with two judges having all the rounds in the favor of the 24-year-old Cuban boxer.

Yerbossynuly made his boxing debut back in October of 2015 and held the WBA International, WBC-ABC, and WBO Global super-middleweight titles.