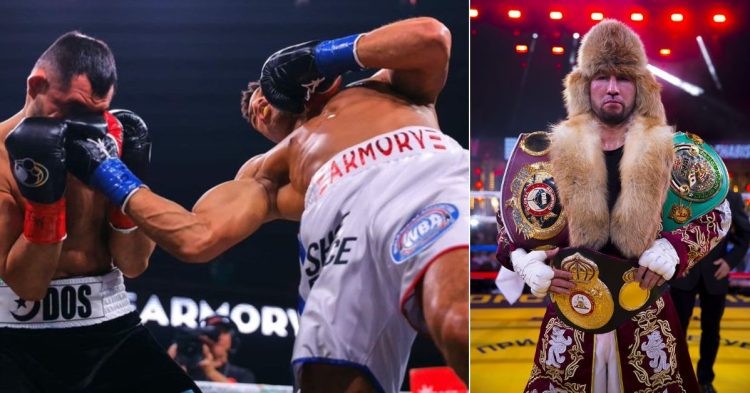 Aidos Yerbossynuly is in critical condition after going through brain surgery following the brutal KO loss last Sunday. Yerbossynuly took on the 24-year David Morrell for the WBA (Regular) super-middleweight title in a fairly lopsided fight.

Earlier, it was reported that Yerbossynuly was out in a medically induced coma after suffering from subdural hematoma. The 30-year-old received a battering at the hands of a young Morrell, eventually dropping a 12th-round TKO loss.

Questions are being raised regarding the safety of the boxer and why necessary steps weren’t taken in light of the damage he had already absorbed going into the final round. Even in the 12th round, Yerbossynuly was dropped in the very first minute, before eventually getting knocked down on the ground. The Kazhakstan fighter managed to get back up but looked severely compromised.

Morrell showed great sportsmanship in helping his opponent reach his corner. Amid all this, the commission looked clueless. While Yerbossynuly was taken to the Hospital soon after, many fans are reporting that the situation wasn’t really handled well. Showtime has taken down the clip of the brutal knockout from their Twitter and YouTube handles.

There’s no doubting the heart of a warrior and Aidos Yerbossynuly was just that! However, sometimes it falls in the hands of the corner to decide what is the right thing to do.

In the case of Aidos, even his head coach Kanat Orakbaev wanted the fight to continue. Ideally, after a beating like that where two of the judges had scored all the rounds in the favor of Morrell leading into the 12th, he should have been a little wiser and stopped the fight.

“Aidos wanted to continue. His head coach (Kanat Orakbaev) wanted him to continue. He evaluated Aidos and said nothing was wrong with him.” Emanuel Savoy, Yerbossynuly’s assistant trainer said.

Be that as it may, this is not the time to play blame games. Aidos Yerbossynuly fights for his health and for his family and our thoughts and prayers are with the Kazhkastani boxer.