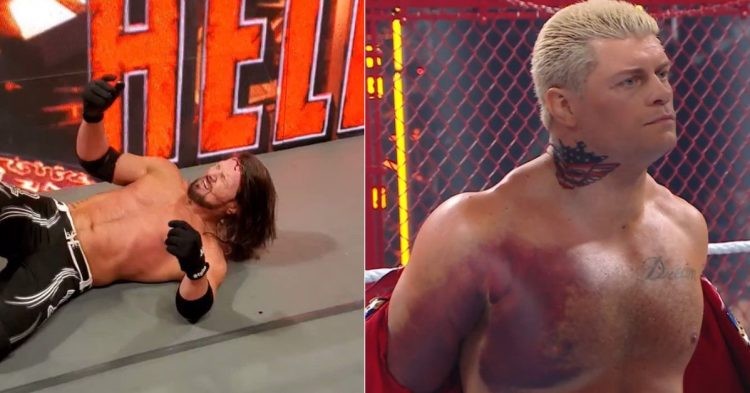 Former WWE Champion AJ Styles has reportedly suffered an injury during the Six-Person Mixed Tag Team match at Hell in a Cell. He teamed up with Finn Balor and Liv Morgan to take on Judgment Day. AJ Styles found himself busted open during the match in a video shared on social media.

It is now time for the HELL IN A CELL MATCH!#HIAC pic.twitter.com/0OriM0AO3q

Besides AJ Styles, Cody Rhodes is also reportedly injured as he came out to the main event with a horribly bruised left arm to compete inside the Hell in a Cell structure.

The Cody Rhodes vs. Seth Rollins inside Hell in a Cell was the most anticipated match of the night. It was a third consecutive loss to Seth Rollins. When Cody Rhodes came out to the ramp during his entrance, he looked fine. But fans noticed that his right arm was busted as soon as Rhodes removed his jacket.

WWE had announced earlier in the show that the American Nightmare suffered from a pectoral muscle injury during a training session. The injury was also used as an improv tool for the match. It was one of the most courageous performances by Cody Rhodes as he went for nearly 25 minutes inside the titular steel structure.

AJ Styles gets busted open in the head

AJ Style seems to have injured himself at Hell in a Cell. He was knocked out of the ring during the six-person match. The Cameraman got him, and he was bleeding profusely. Since Styles’ blood was pouring out of his head, the camera had to be removed until styles had cleared the blood and got into a better shape. A fan recorded the incident and posted it on Twitter.

There were some fans in attendance who claimed that someone brought Styles a towel before he appeared on camera again. At the beginning of the video, the bleeding didn’t look serious. But it started spraying out as soon the Phenomenal One started moving on the floor. He stood up a little shocked, but then he laid back on the ground covering his head.

Fans hope that AJ Styles isn’t seriously hurt. but the American Nightmare could be out of WWE TV for a while. What do you think about AJ Styles and Cody Rhodes’ injury situation? Drop your comments below.