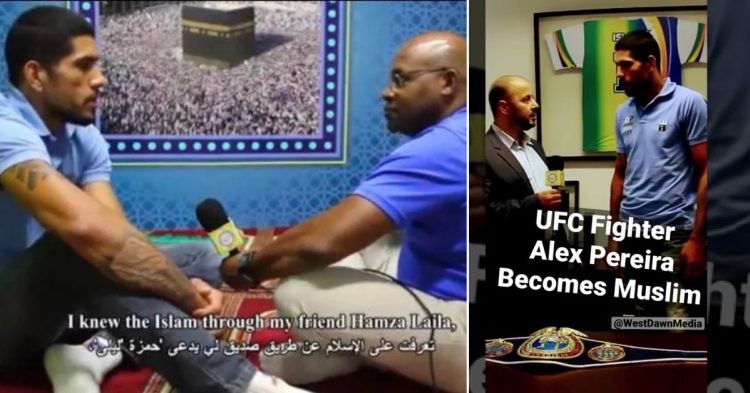 Alex Pereira converted to Islam in 2015

Alex Pereira reigns supreme as the UFC’s Middleweight Champion of the world. A decorated kickboxer, Pereira has now taken over the world of mixed martial arts and is the first fighter to hand a stoppage loss to Israel Adesanya. While much is known about Pereira’s combat sports career, there’s little information on his personal life.

Alex Pereira belongs to the Tupi Brazilian group of people, an indigenous race that was one of the largest groups of Brazilians before colonization. Pereira’s nickname Poatan is a word in Tupi-Guarani, meaning “Hands of Stone.”

“My father was a hard-working man but he never told me about this. Later he told me that my ancestors were warriors. I use that as motivation. My ancestors were the first inhabitants of Brazil with little resources and managed to survive.” Pereira has revealed.

What is Alex Pereira’s religion?

Alex Pereira is a Christian by religion. The name Pereira finds its roots in Portuguese and the Galician language. However, Pereira converted to Islam back in 2015.

“The kickboxer, who read some books about Islam given to him by a friend of his, called Hamzah, became a frequent visitor to the Federation of Muslim Associations in Brazil to meet with scholars, who explained to him the principles of Islam. Consequently, he decided to convert to Islam,” Taqi Al-Din, the chairman of the Supreme Council of Imams and Islamic Affairs in Brazil said back in 2015.

There are reports that Pereira’s decision to switch to Islam was partly due to his alcoholism. Since Islam forbids the consumption of alcohol, Poatan found it fitting to absorb the teaching of Islam. However, there are also reports that Pereira has since then moved away from Islam and has fallen back to his indigenous roots.

There’s no clarity on his religious beliefs and Alex Pereira has not issued any statements.

Alex Pereira’s walkout to the kickboxing ring/octagon involves a bow-arrow ritual, which is his way of paying his respect to his indigenous roots. Poatan has stated that he finds motivation through these various acts. One such was when Periera painted his face during the face-off against Israel Adesanya back at UFC 281.

“It’s very important to preserve the indigenous people who are sometimes a little forgotten,” Poatan says.

Even the tattoos on Alex Pereira signify the importance that the indigenous culture holds in his life. Poatan has two tattoos of indigenous people on his body, and the UFC Middleweight Champion has stated that for him they are a symbol of motivation.