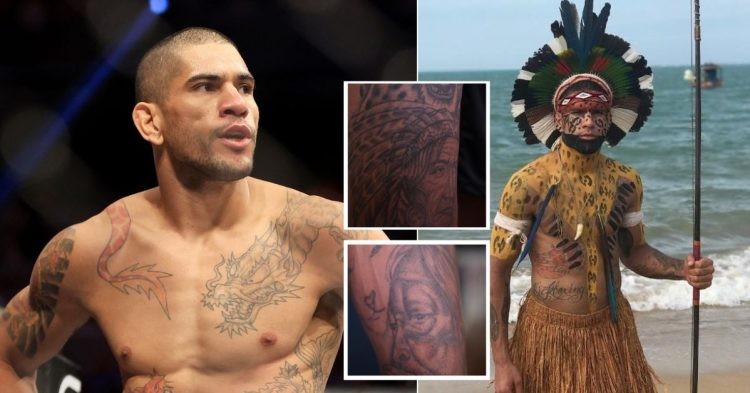 Alex Pereira’s body is inked with several tattoos. From wild animals, dragons, and indigenous people, to his love for boxing, his sons, and his indigenous roots. Growing up, Pereira felt it was really cool to have tattoos, and today, he feels that they represent his life in the form of ink etched on his body.

There’s always something that serves as a motivation for every fighter. In the case of Alex Pereira, it is his indigenous roots and he likes to honor it with his tattoos and his walkout ritual whenever he comes out to fight.

“My father was a hard-working man but he never told me about this. Later he told me that my ancestors were warriors. I use that as motivation. My ancestors were the first inhabitants of Brazil with little resources and managed to survive.” Pereira says.

Alex Pereira has two tattoos of indigenous people inked on his body. While it’s not clear whether they are his family ancestors, it’s safe to say it’s his way of paying tribute to his ancestral history.

Alex Pereira shows his love for animals through his tattoos

“The gorilla represents a lot to me. It’s a strong, independent animal with a strong connection to nature.”

“Besides being a very strong and athletic animal, the Brazilian jaguar is also very smart and ruthless. In my fights, I try to be like that too. I hunt my opponents and then finish them without mercy.” Pereira revealed.

All the tattoos on Alex Pereira reveal a certain achievement in his life. Be it “Kickboxing” written on his abdomen to show his love for the sport or the boxing gloves on his arms.

“No, not really. But every single tattoo on my body has a special meaning. Like the boxing gloves, and the names of my kids. They represent my story in life.”

“Like the Glory belt for example, maybe one day I’ll lose it. But it will always be part of my story. Nobody can steal that from me.”

As for the two names inked on each of his arms, the name of his two sons Alessandro and Lohan give him strength. “No matter where I have to go fight, this way they are always with me.”

The story behind the Koi fish tattoo on Alex Pereira

Koi fish are loved in Japan and China and are a symbol of strength and success. It is associated with Japanese cultural identity and has often drawn significance in mainstream media. There’s a legend behind Koi fish called the “The Dragon Gate” legend.

The legend talks about a lone Koi fish that swam up a huge waterfall against the desires of demons only to emerge as a Dragon after drawing recognition from the Gods for its efforts. Koi fish looks golden, and hence when it turned into a Dragon, the magnificent beauty of a Golden Dragon became the symbol of strength.

“When I got the Koi-fish tattoo, I didn’t know about the legend. Later I learned that when a Koi swims to the top of the mountain, he turns into a Dragon. I think that’s really cool.” Pereira recalls. It’s quite interesting to note that Pereira has several Dragon tattoos on his body.

Alex Pereira got his first Dragon tattoo when he was just 18 years old. Now, he has three Dragon tattoos inked on his body. Pereira’s back is inked with Dragon, and then there’s one on his chest because he “really likes them”

“Actually, when I was young I thought having tattoos made me look tough or cool. The first dragon tattoo I got was when I was eighteen. The dragon didn’t really have a special meaning to me. Later on, I got two more dragons on my body. But I really like them.”