Alexa Grasso and Yair Rodriguez Dating Rumors- How Did It All Start? 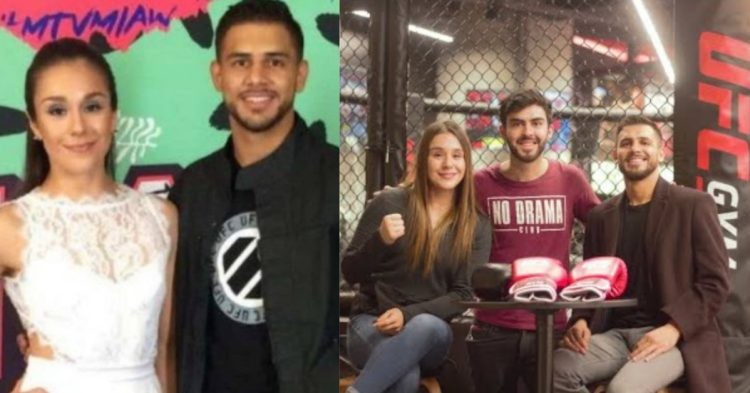 Alexa Grasso is a UFC fighter in the flyweight division. Grasso is an exciting young fighter in a division which has a very dominant figurehead. One of the greatest female fighters of all time, Valentina Shevchenko is the 125lbs champ. Although Alexa is still evolving, she might become a viable contender to dethrone her.

Grasso made her UFC debut against Heather Jo Clark in 2016. She announced her arrival with a unanimous decision win. In her first 6 fights, she had a somewhat iffy record of 3-3 with losses against the likes of Felice Herrig, Tatiana Suarez and Carla Esparza. Although she was still fighting at 115lbs, Grasso moved up to flyweight following the loss to Esparza.

Since the move, the 29-year-old won three back-to-back fights! She has beaten Ji Yeon Kim via unanimous decision and submitted Joanne Wood. However, the biggest win of her career was against Macyee Barber at UFC 258 in February 2021. Following the wins, she broke into the Top 5 of the division.

She has developed quite a big fan base. With 450k+ followers on Instagram, Grass has built herself up to be a big celebrity fighter. However, that is not surprising considering the fact that she is Mexican and it is well-known how rabidly they support their own. Former UFC flyweight champ Brandon Moreno is a shiny example of it.

However, with fame, comes a certain level of gossip. Grasso is certainly an attractive person and the speculation has run rampage regarding her dating life. There was a big rumour that she was dating a fellow Mexican fighter and UFC featherweight Yair Rodriguez.

How did the fans come to the conclusion that Alexa Grasso was dating Yair Rodriguez? It seems like it all started after Alexa and Yair were spotted together. There are pictures floating around on the internet where both Alexa and Yair could be seen happily posing together.

UFC opened up a gym in Mexico in 2020. Alexa Grasso and Yair Rodriguez are two of the biggest stars that UFC has in the country. So it is no surprise that both Grasso and Rodriguez were present on the spot for the ceremony. But that was not the only time when Yair and Alexa got together.

In 2019, former UFC heavyweight champ and a big Mexican icon, Cain Velasquez, was making his debut in professional wrestling. Both Grasso and Yair Rodriguez were captured in the same picture, talking to Velasquez backstage. It only poured fuel to the fire that they are dating.

In reality, it is not confirmed yet if they were dating or not. Neither fighter commented on the rumours. Hence the rumours are just rumours. Both Yair and Alexa have kept the details of their love life private. So there is no validity to the speculation about a potential relationship between the two Mexican fighters.

Who Won George Kambosos Jr. vs Devin Haney 1 – Looking Back at Their First Meeting Ahead of the Rematch