Alexa Grasso UFC Fight Purse: How Much Money Has Grasso Earned in Her UFC Career? 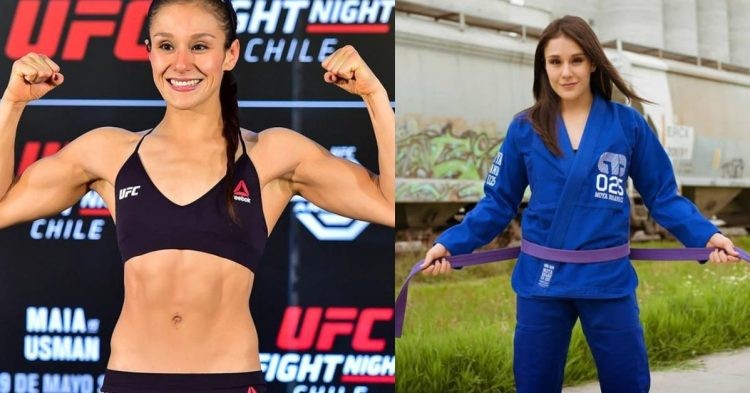 Alexa Grasso is a Mexican MMA fighter and one of the hottest prospects in the women’s flyweight division. Grasso is set to face Viviane Araujo in the main event of UFC Vegas 62: Grasso vs. Araujo (also known as UFC on ESPN+ 70 and UFC Fight Night 212).

The Mexican Fighter made her UFC debut in 2016 against Heather Jo Clark at TUF Latin America 3 Finale: dos Anjos vs. Ferguson. She was amazing in her debut and won the fight via decision. Since then, she has made her way into the top 10 women’s flyweight rankings.

She has incredible victories over notable fighters like Randa Markos, Maycee Barber, and Karolina Kowalkiewicz. Throughout her UFC career, Grasso has made a lot of money.

Grasso made her debut at TUF: Latin America 3 Finale and won over Heather Jo Clark. She earned $22,500 including the base salary of $10K, a $10K win bonus, and $2,5K from sponsorships.

In her next fight, Grasso was defeated by Felice Herrig at UFC Fight Night: Bermudez vs. Korean Zombie. She took away $14,500. This includes $12K to show and $2,500 from sponsorships.

Grasso rebounded with a win in her next fight over Randa Markos at UFC Fight Night: Pettis vs. Moreno. However, she was fined $2,400 for missing weight. The remaining payout was $24,100. This included $12K to show, a $12K win bonus, and $2,5K from sponsorships.

In UFC Fight Night: Maia vs. Usman, the Mexican fighter was scheduled to face Tatiana Suarez. However, she lost the bout but managed to take away $24,000, which includes $20K to show and $4K from sponsorships.

In her next fight at UFC 238, Alexa was set to fight Karolina Kowalkiewicz. The Mexican fighter won this bout and earned $44,000. This payout included the base salary of $20K, with a $20K win bonus, and $4K for fight week incentives.

Grasso again fell on the losing side in her next bout at UFC Fight Night: Rodriguez vs. Stephens.  She was defeated by Carla Esparza via decision but still managed to walk away with a massive payout of $77,000. This includes $22K to show, $50K for the ‘Fight of the Night’ bonus, and $5K from sponsorships.

For her next fight, Grasso was scheduled to face Ji Yeon Kim at UFC Fight Night: Smith vs. Rakic. She won this bout via decision and earned $79,000 ($37K to show up, a $37K win bonus, and $5K from sponsorships.

The Mexican fighter is coming off a submission win over Joanne Wood at UFC Fight Night: Blaydes vs. Daukaus. This is Grasso’s biggest payday so far as she earned a whopping $92,000. She received a$43K win bonus along with a base salary of $43K and $6K from sponsorships.

Grasso’s total UFC career earnings stand at $460,000 till now. However, this number is only an estimation, as UFC does not release the official number of the payout.

Who Won George Kambosos Jr. vs Devin Haney 1 – Looking Back at Their First Meeting Ahead of the Rematch