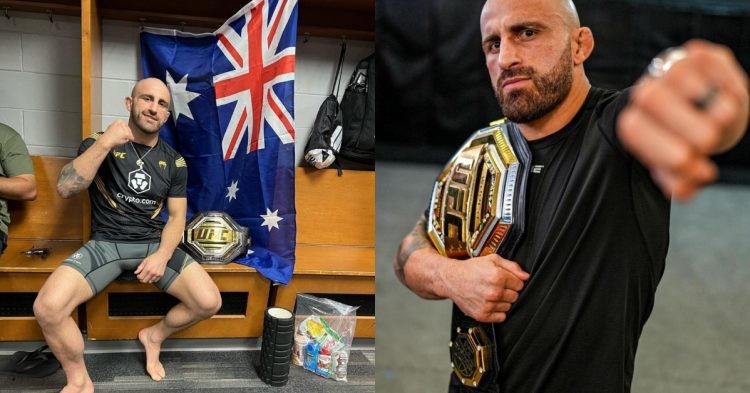 The UFC Featherweight Champion Alexander Volkanovski is set for a quick turnaround. He just defended his title against The Korean Zombie at UFC 273 in April. Now he is ready to step inside the Octagon once more in a span of just 2 months. He will take on Max Holloway for the third time in 3 years at the upcoming UFC 276.

Following their 2 close encounters at UFC 245 and UFC 251 respectively, Volkanovski and Holloway will finally put an end to the rivalry this Saturday. The winner of this contest will be in the running to be the greatest featherweight of all time. However, not just the three wins over Holloway, Alex’s journey to the top of the division has seen him beating many elite fighters.

The Aussie fighter holds wins over Chad Mendes, Jose Aldo, Brian Ortega and the aforementioned Max Holloway. He has been a top fighter since 2019 and being a leading event talent, comes with its fair share of financial gains. Let’s take a look at how much money Alexander The Great Volkanovski has earned through the course of his UFC career.

Alexander Volkanovski’s rise was kicked off with a win over Chad Mendes at UFC 232. After a slow first round, Volkanovski picked up the pace and stopped Mendes in the second round via KO/TKO. According to MMA Fighting, Alexander earned $50,000.

The first contest of the trilogy took place on December 15th 2019. But Holloway was the champion and Volk was the challenger. For the fight, the 34-year-old was paid $280,000 to show up. Although he did not earn any winning bonus, Alex did earn about $30,000 as the fight week incentive pay.

The second bout between Max Holloway and Alex Volkanovski came in 2020 at UFC 251. It was the co-main event to Kamaru Usman vs Jorge Masvidal’s main event. For his first title defence, Alexander Volkanovski earned $350,000 to walk out to the Octagon and earned $40,000 as the fight week incentive. In total, he earned $390,000 for the event.

For his last walk out to the Octagon, Volkanovski made over a reported $600,000. Although the exact figures are not available at the moment, his base salary is estimated to be in the ballpark of $500,000. He also earned a $50,000 Performance of the Night bonus. The bitcoin bonus and the fight week incentive pay bumped his total payout in excess of $600,000.