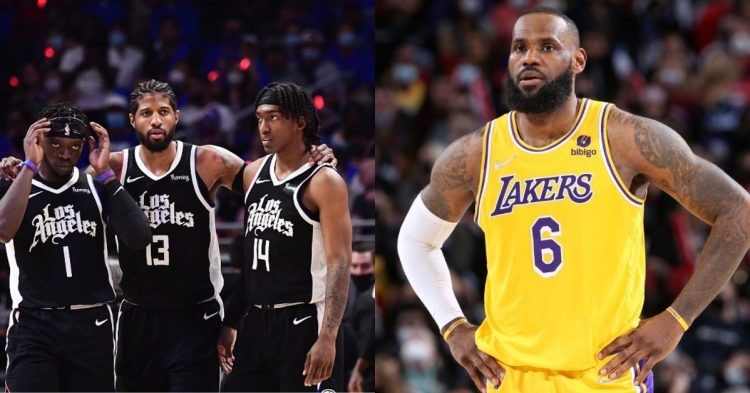 James made history with his 46-point performance against the Clippers. He is the only player to have scored 40 points, against all the 30 teams in the NBA. It is quite an astonishing feat to accomplish, however, the loss against the Clippers trumped it last night. King James walked out of the court with 6.4 seconds remaining on the clock.

Despite scoring 46 points for the Lakers, he is being slammed by fans for caring only to break Kareem-Abdul Jabbar’s scoring record. It is a bit harsh for the King, as none of the players for the Lakers even managed to cross 18 points on the night. Twitter blasted the 4x MVP for his early exit and lack of sportsmanship for the team.

all lebron cares about is kareems record. sad to see.

He can’t stand playing with these bums like Russ lmao

However, it is a bit too hard to rant out on someone, who is the best player on the team. LeBron, however, has walked out of many games when the team is in a losing position. It was a night to forget for the Lakers, as a lot of errors were made for which they were made to pay. Next up, The Lakers will be hosting the San Antonio Spurs at home.

How many points does LeBron James need to pass Kareem-Abdul Jabbar?

The Lakers superstar James is just 178 points shy of crossing Kareem-Abdul Jabbar on the NBA’s All-Time scoring list. LeBron is averaging 29.8 points, for the Lakers this season, if he keeps this up, he will break the record in the next 5-6 games. James broke the record for most points in the regular season and the playoffs on February 2022.

LeBron with 46 points vs Clippers 👑

LeBron James is now the only player to have scored 40 points on every team in the NBA. He will now surely be looking to surpass Kareem and get his name on the history books for a long time. The 38-year-old is not looking like stopping any time soon, despite his age he is averaging better than most players. He is currently 6th in the scoring leaderboard this season.