All The Absurd Things Kyrie Irving has Said Throughout the Years

Brooklyn Nets guard Kyrie Irving says peculiar things all the time it does not even surprise people anymore. From insinuating that the earth is flat to saying Christmas is not a holiday, Ky has left no stone unturned.

Irving was drafted in 2011 as the first pick and hasn’t looked back ever since. He won his first championship in 2016 in a historic manner against Golden State Warriors hitting the clutch 3-pt shot. However, KD joining the warriors and some Cavs locker room drama led him to join Boston Celtics in 2018. He didn’t see any success there either, losing in the second round of playoffs. 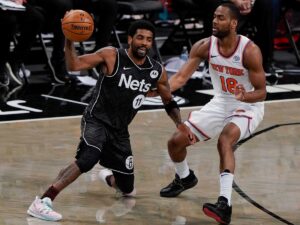 Whether Kyrie Irving really has complete freedom of though or he just fell prey to conspiracy theories is arguable. He had sound arguments to some of the things he believed in like the JFK, Bob Marley, and MLK assassinations, or the presence of extraterrestrial beings. However, he also believes that the earth is flat and that NASA is lying is selling us a narrative.

If someone in the 21st century believes that the earth is flat and the laws of physics are untrue, it is out of sheer ignorance. People often give Galileo Galilei as an argument to defend their beliefs but they use to defend something he disproved throughout his life. It doesn’t take a genius to understand why earth cannot be flat but Kyrie Irving is still not convinced. Irving is also convinced that Dinosaurs did not exist and he quite possibly believes that evolution didn’t happen.

He says the education system is designed to lie to us and the distinction between race and class is created for the powerful to rule the world. This does not seem far fetched like his other theories. He was confronted by Jimmy Kimmel about his beliefs but Ky laughed them off and said fans are taking him out of context. 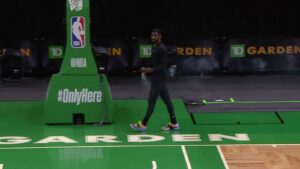 What is Kyrie Irving’s religion?

In his earlier years, Irving was not particularly religious or outspoken about his faith. Although in recent year he has made shocking comments that beg the question “what religion does Kyrie Irving follow?”

He has never been asked this question explicitly but it was widely accepted that he was a devout Christian. This, however, changed when Irving reportedly said “f*ck thanksgiving” on one occasion and said Christmas is not a holiday. Although there are Christians who don’t celebrate Christmas as a commercial holiday that it is now, Irving’s latest Instagram posts reveal a different story.

Irving observed the Kwanzaa celebration in December this year which started with Christmas and specific to African Americans. It is an annual celebration of black people of all religions. Kyrie constantly emphasizes the importance of god (Allah) and faith. While some might think he is Muslim, it’s a common practice in the middle east to refer to Jesus as Allah. He seems to be embracing his black ancestry by celebrating Kwanzaa but we don’t know which religion he follows.

The black lives matter movement has had a great influence on him in religious regard much like Malcolm X. in the 60s under Elijah Mohammad and the Muslim Movement in the United States at the time.