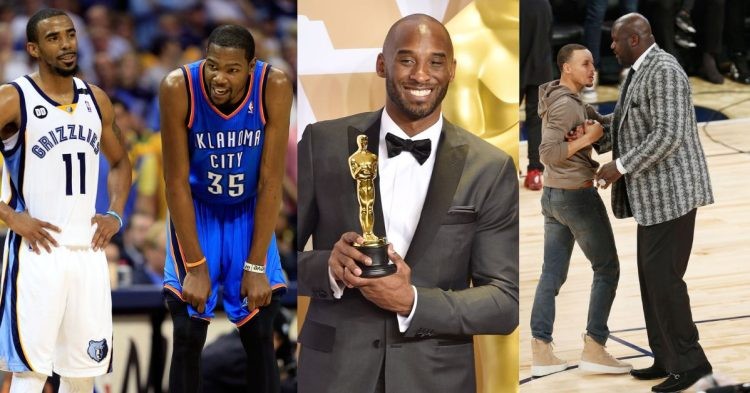 Nothing captures the world more than a cinematic masterpiece. Hollywood is at the heart of the United States of America. It is no surprise that some of the players in the NBA aren’t just interested in watching them but take an active part. Many Film celebrities are spotted during games in the NBA and are often huge fans of the franchise they support.

With the release of Stephen Curry: Underrated, last night at the Sundance Film Festival, many are intrigued to know about such Films/ documentaries/series. Last year Space Jam: A New Legacy, in which LeBron James played the Protagonist. They Call Me Magic, a docuseries on the life of Magic Johnson. The Last Dance, which took everybody’s breath away, showed the life of Michael Jordan.

NBA players who have won an Oscar award

Let’s take a look at some of the NBA players who along with their contributions to the movies, documentaries, or series, received the Oscars for their roles.

The Los Angeles Lakers legend Kobe Bryant is the first athlete to ever receive the award in 2018. Kobe won the Oscar for the Best Animated Short Film category, ‘Dear Basketball’. The 18x NBA All-Star narrated the film as a move to announce his retirement from the Lakers. The Mamba proved yet again that the sky is not the limit for him, by winning the award.

4 years ago today (2018), Kobe Bryant won an Oscar for his animated film Dear Basketball. It meant everything to him.

“I feel better than winning a championship…I swear I do.” pic.twitter.com/KRYWSG91Ga

Kobe’s accomplishments inspired other NBA athletes to take part in cinema and make a name for themselves as well. It is a huge statement not just for the MVP but for the sports industry.

Stephen Curry- ‘Queen of Basketball’ in 2022

The 2x MVP alongside lifting the 4th NBA title in his career also won the Oscar for the Best Documentary Short Subject, ‘Queen of Basketball’. The 4x NBA champ signed up to become the Executive Producer alongside Shaquille O’Neal. Steph joined the Unanimous Media company shortly after Lusia Harris’ passing away.

ICYMI: @OctagonBsktball‘s own @StephenCurry30 took home an #Oscar after winning Best Documentary Short Subject for “The Queen of Basketball.” 🎬🏆

The documentary is about Lusia Harris, who is the first woman in history to be officially drafted into the NBA. “We’re honored to join the talented team behind The Queen of Basketball and play a role in uplifting the story of the trailblazing Lucy Harris. Lucy, a true pioneer in the game of basketball and an inspiration for many, deserves to be recognized for her achievements,” said Steph in March 2022.

Shaquille O’Neal- ‘Queen of Basketball’ in 2022

Shaquille O’Neal is one of the greatest basketball players and has won everything there is. The 15x All-Star also accomplished outside basketball, winning an Oscar for the Best Documentary Short Subject, ‘Queen of Basketball’.

The MVP can now join his former teammate, Kobe Bryant in sharing yet another accomplishment with him. Despite winning the prestigious award, both of them were not present on the day to receive the honor. The project’s director, Ben Proudfoot, received the trophy that night.

The Brooklyn Nets star, Kevin Durant is not just accomplishing on the court, but off the court as well. He is a highly decorated NBA player, with league MVP, 2x NBA champion, and 2x NBA Finals MVP. He can now proudly say that he is also an Oscar winner. The Slim Reaper won an Oscar for Best Short Film, ‘Two Distant Strangers’.

▪️scores 33 points off the bench in a Nets win

▪️@TeamDurantAAU wins 16U and 17U Titles at Pitt JamFest

Just like his former teammate during his time at the Golden State Warriors, he signed up as an Executive Producer under Thirty Five Ventures, alongside Rich Kleiman. Durant is quite interested in the media and entertainment industry and it wouldn’t be surprising to see him win another award.

The short film is about a young black man who is stuck in a time loop and keeps on reliving the incident in which he is killed by the police during a run-in with them.

Congrats to the Oscar-award winning short film, @TwoDistantFilm. An important project and conversation – you can watch it now on Netflix. Proud to be a part of it and congrats to the 2DS team. #TwoDistantStrangers pic.twitter.com/irfl8KEqdh

The Utah Jazz may not be getting him any closet to silverware. However, his adventure into the media and entertainment industry did get him some recognition and a feeling of pride.

Only two nominees can be picked from the film, it is the person who is the most involved with creative aspects. So it is either the director of the film or the producer of the film. If the producer is picked then he/she must have performed a major portion in producing the film. Hence, Kobe is the only one holding the Oscars and not the others. The remaining could not be nominated to receive the award as they were executive producers.