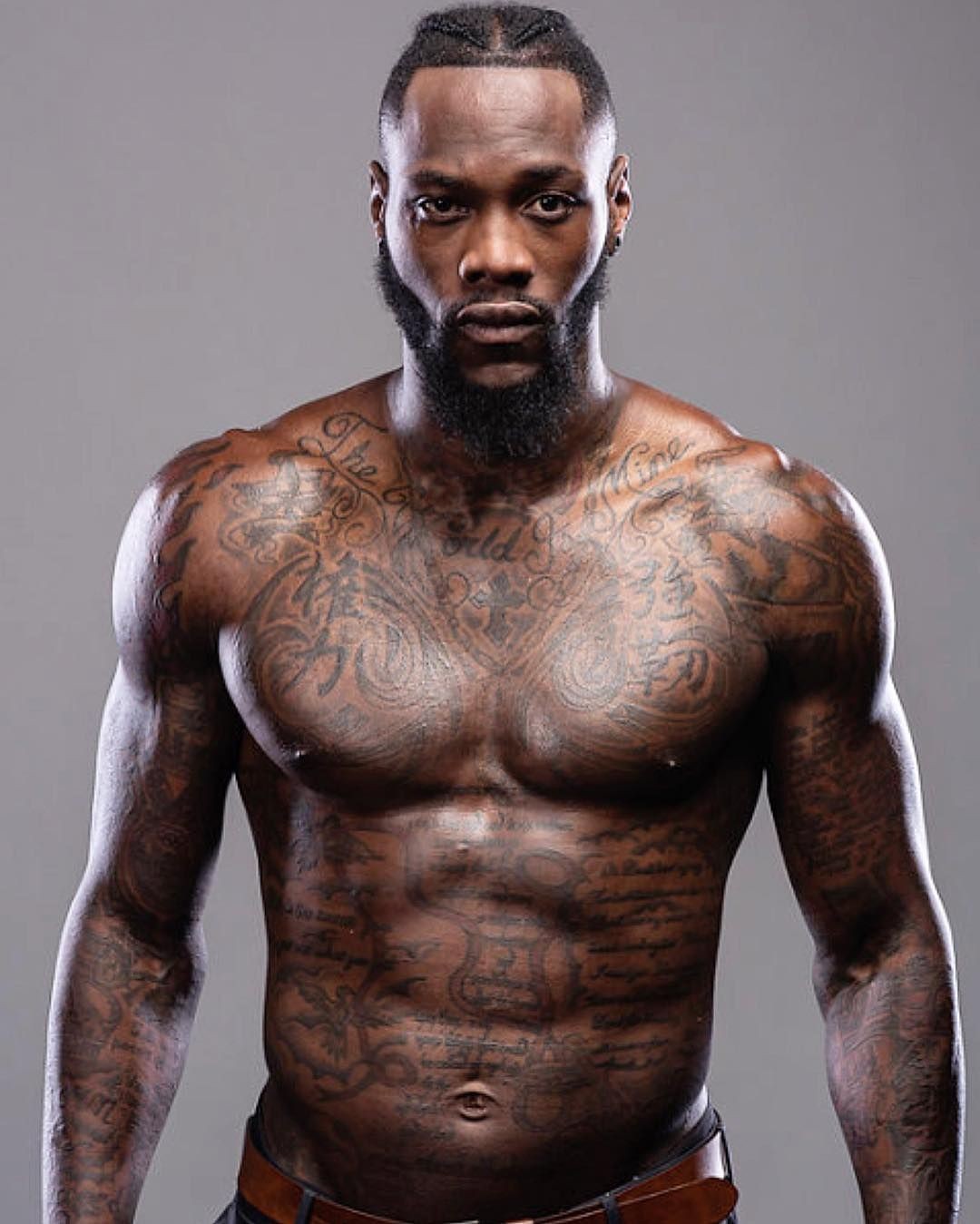 Former WBC heavyweight champion Deontay Wilder is one of the best boxers present in the current era of the sport. Moreover, The Bronzebomber is a tough fighter with an incredible record to his name. This was all possible due to Wilder’s tremendous knockout power which has helped him obliterate opponents.

Apart from his greatness in boxing, The American boxer also attracts several fans through his attitude and fashion sense. Deontay loves to make a statement with his clothing outfits as he steps inside the ring. Besides Wilder’s unique walkout outfits, there is another thing that fascinates all the fight fans. And that thing is none other than the tattoos inked on his body.

The former champion loves to get inked and subsequently, he has around 33 tattoos on his body. So let us go through some of Deontay Wilder’s prominent tattoos and find out the meaning behind them.

All the Prominent Tattoos of Deontay Wilder 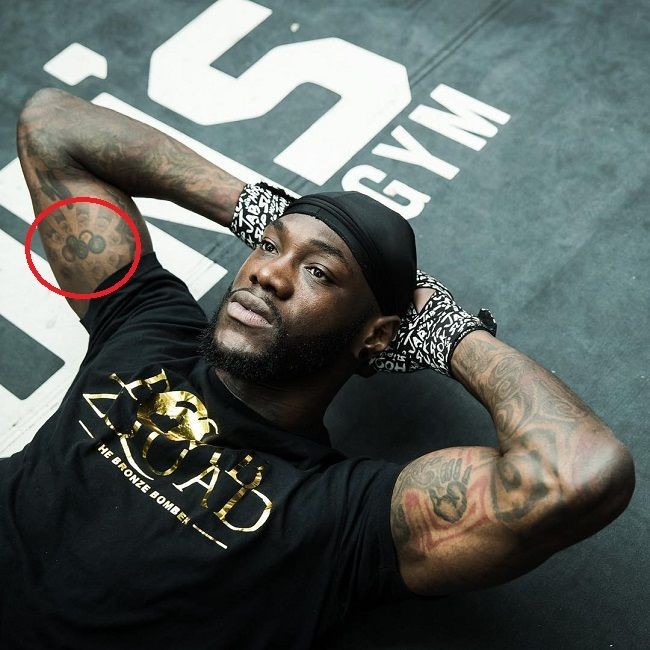 Deontay Wilder has a tattoo of the Olympic rings on his right bicep. This ink-art signifies Wilder’s bronze medal success in the 2008 Olympics. To express a tribute towards his achievement, Wilder got the tattoo inked on his right arm. 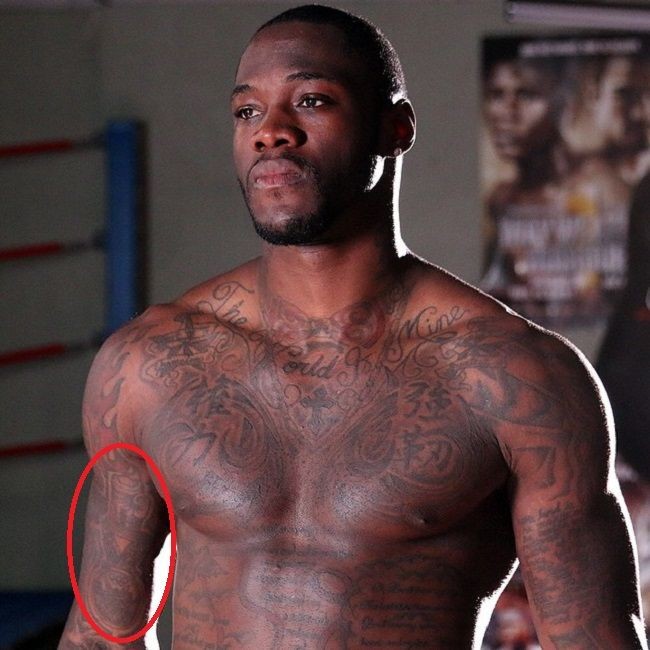 In addition to his Olympic rings tattoo, Wilder also has a tattoo of the bronze medal that he won in the heavyweight division in the Olympics on his right arm. The reason behind getting this tattoo is that he wanted to express his joy of winning the bronze medal in unarguably the biggest sports competition. 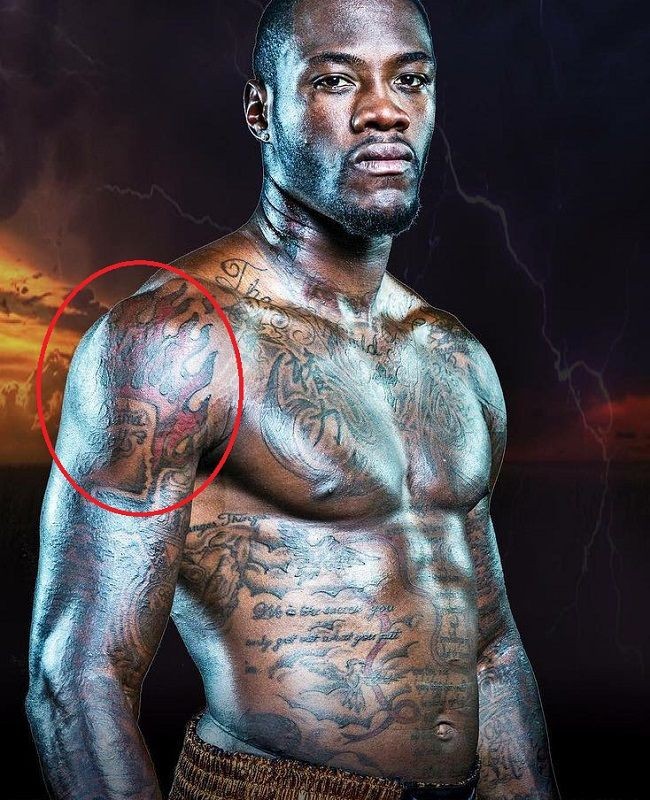 The former WBC heavyweight champion has a tattoo on his right shoulder that consists of the name Bama Boy. There is a short story behind this tattoo of Deontay Wilder. The Bronzebomber started his boxing career as an amateur in 2005. The American boxer began his training in the Sky Gym in Alabama. As he hails from Alabama, he is popularly known as Bama Boy. 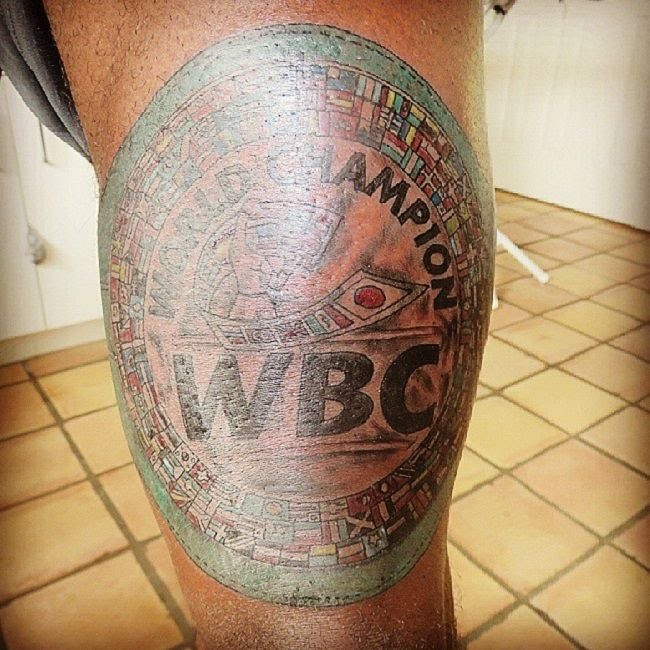 Deontay Wilder has a tattoo of the WBC world heavyweight belt on his right thigh. The Bronzebomber held the title between 2015-2020 where he defended his belt successfully on ten occasions. Wilder got this tattoo inked after winning the belt in 2015 against Bermane Stivarne. 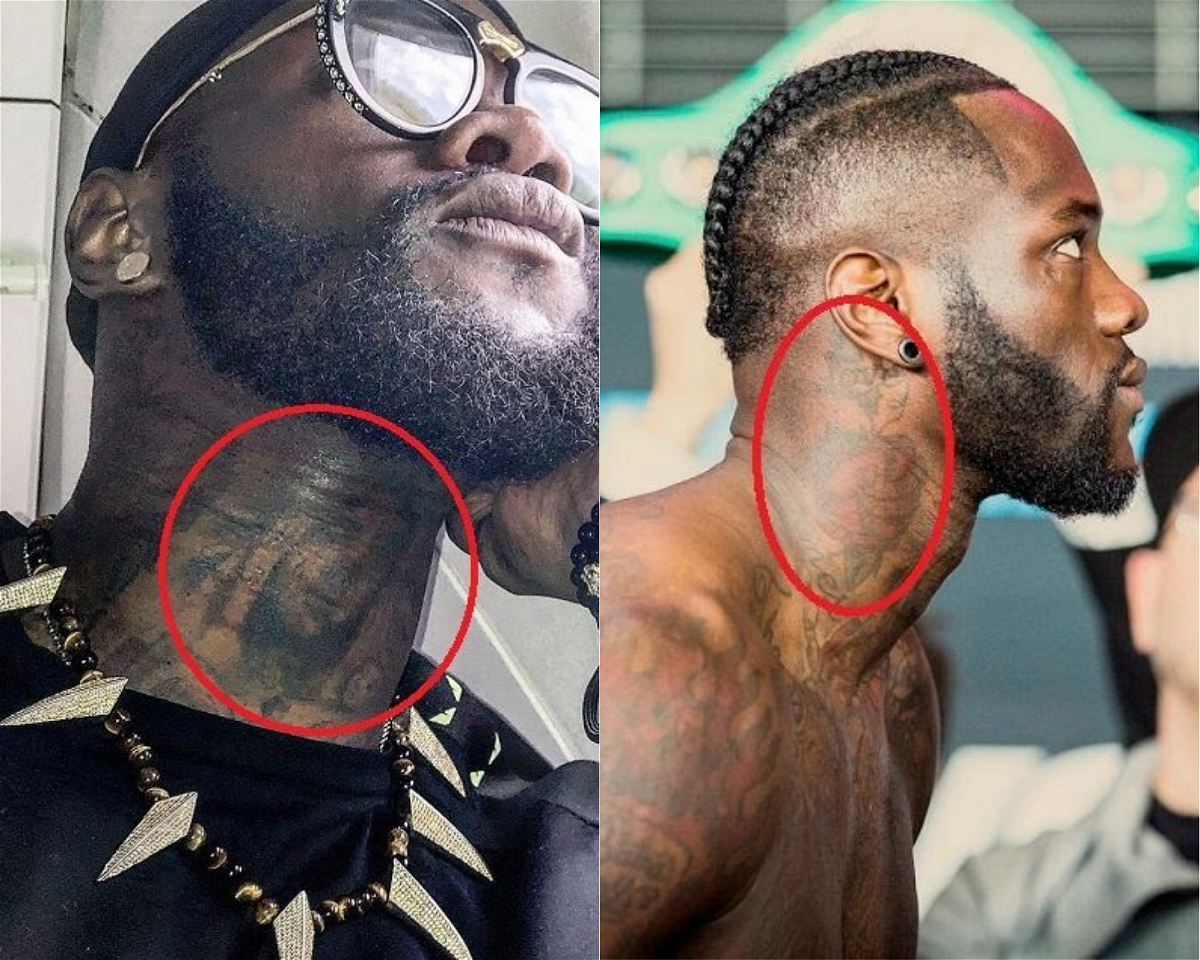 Wilder has two significant tattoos around his neck. The first one is an ink-art of a fist on the right side of his neck. Whereas the second tattoo piece is of the Virgin Mary on the frontal side of his neck. Wilder’s got this tattoo because of his religious beliefs and love for God. Virgin Mary is also known as Mother Mary who is the mother of Jesus. This tattoo signifies love and blessings as Mary guides everyone that is going through a tough phase. 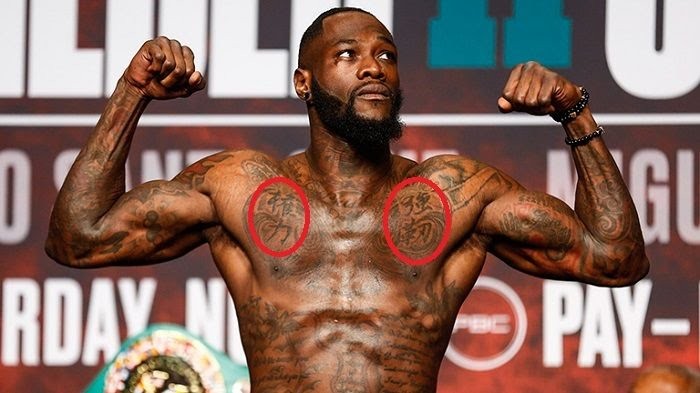 The Bronzebomber has several significant tattoos on his body. Out of these the three tattoos that stand out are the Chinese letters tattoo, pigeon tattoo and the Spiritual Writings ink piece. All three pieces contain special meaning. The pigeon tattoo signifies a symbol of love, care, freedom, hopes, and new beginnings. 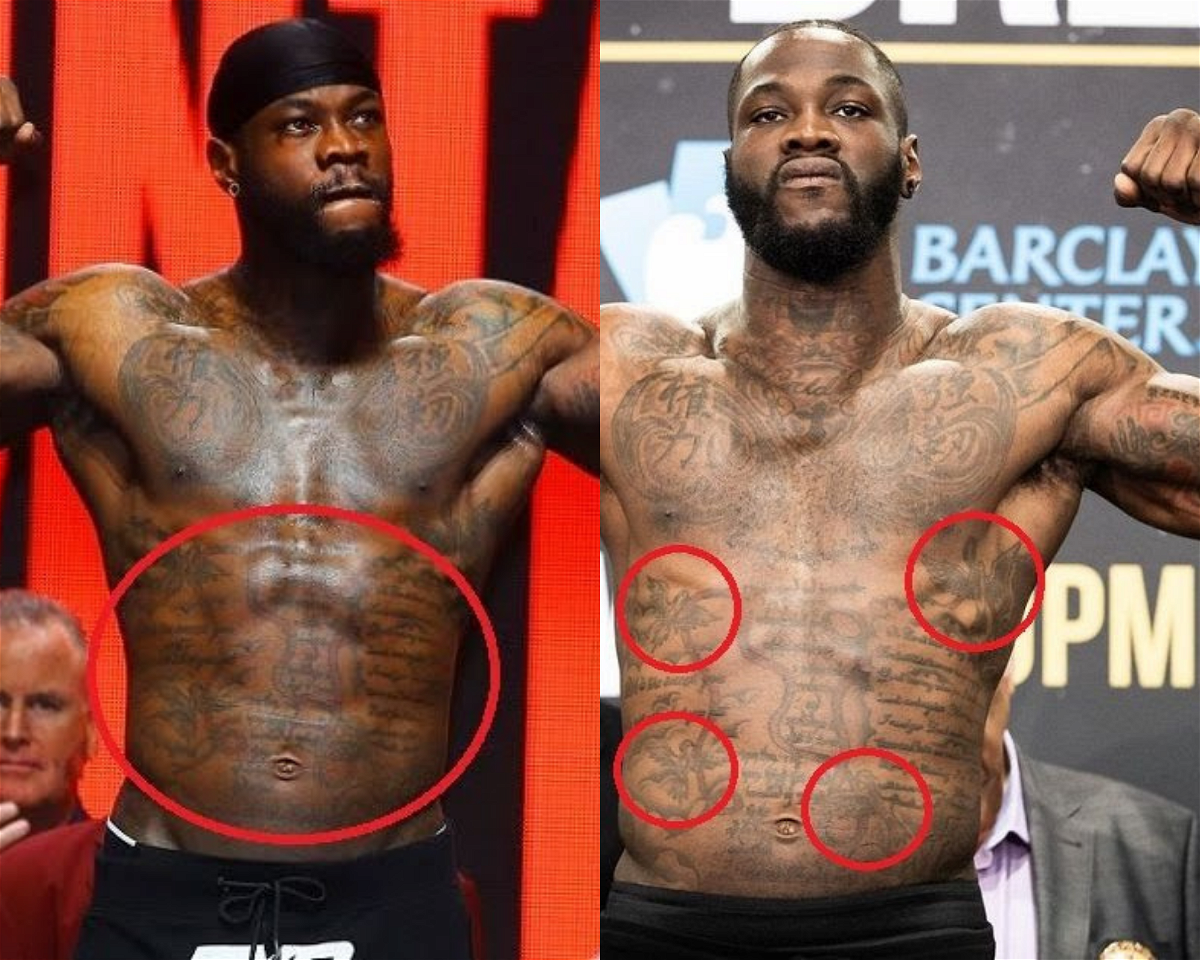 Meanwhile, the Spiritual Writings’ include phrases from the Bible as Deontay is a religious person and he wanted to seek blessings from God. As a result, he got the spiritual writings inked on his body.