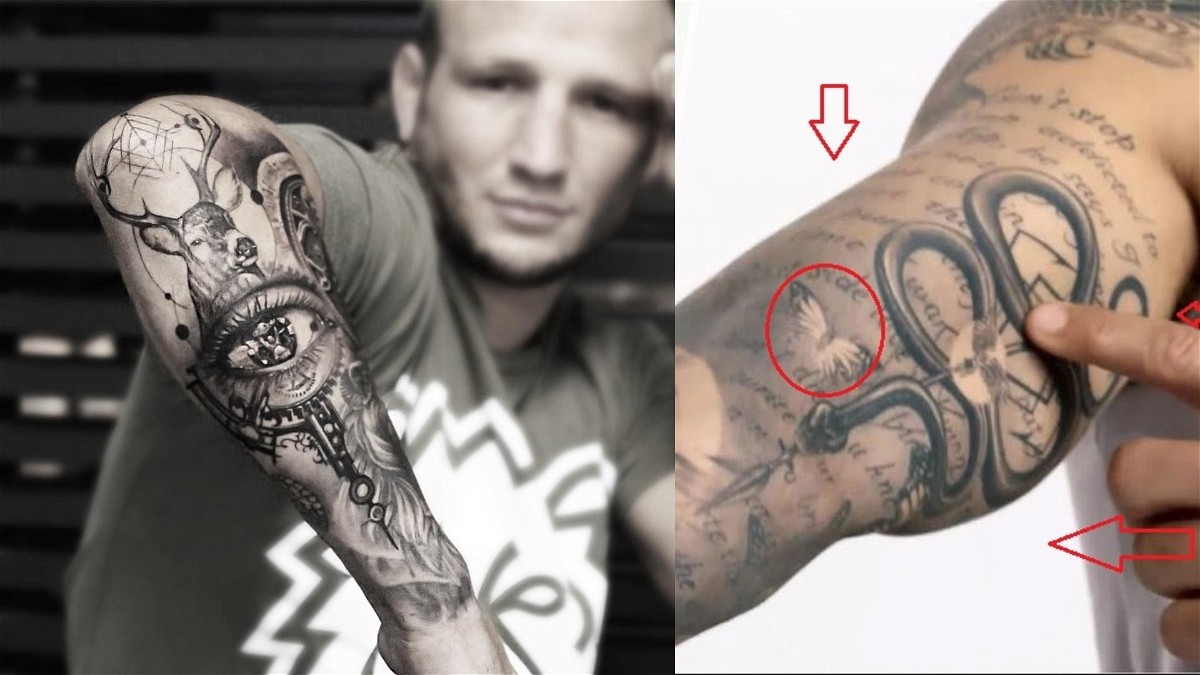 TJ Dillashaw is a two-time former bantamweight champion in the UFC. Moreover, he has established himself as one of the greats in Mixed Martial Arts. This is because of his excellent record and the vast number of accomplishments he has attained during his career. However, apart from smashing people in the octagon, Lieutenant Dan has a keen interest in tattoos.

Therefore he has nearly twelve tattoos on his body. Dillashaw’s every tattoo signifies great meaning behind them as a result, let’s take a look at the meaning behind each tattoo.

Dillashaw explained the purpose and importance behind each tattoo in an interview with GQ Sports. Additionally, he also speaks about his tattoo artist and showers him with high praise.

TJ Dillashaw started off the interview by sharing his mother’s feelings about his tattoos. My Mom hates it. I waited till I was 30 so I told her like mom I’m 30 years old like I’m a grown man like but she hates it every time I get one. Later Dillashaw mentioned that he first wanted to get a tattoo when he was in college but he thinks it was a good decision that he didn’t get tattoos while he was young. 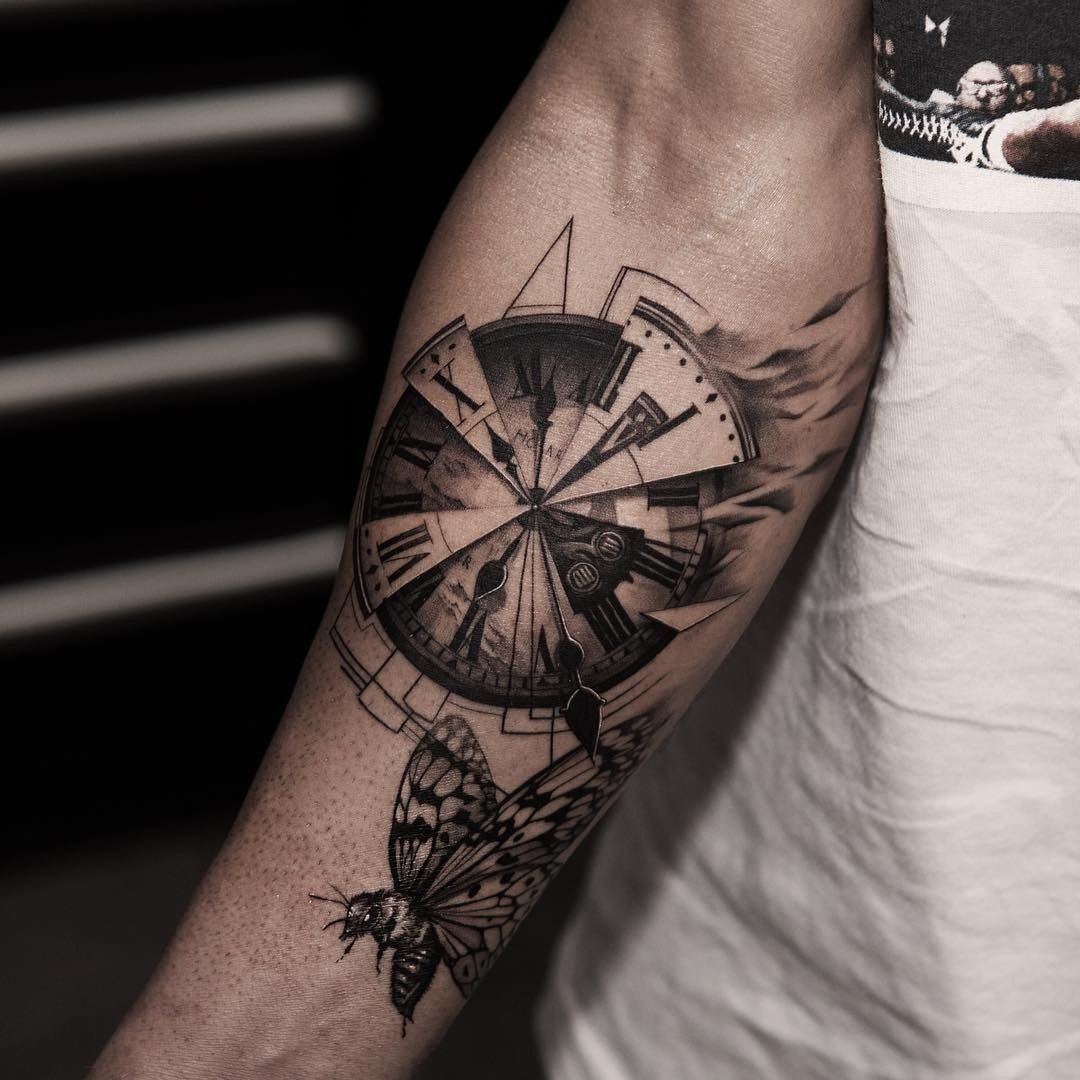 TJ Dillashaw breaks down the meaning behind each tattoo and also explains the significance behind his first tattoo while speaking to GQ Sports. “My very first was a two-piece it was the lion here ( indicating his tattoo on the right arm) as well as the clock. It was a bunch of clocks meshed together for like the race of time and then the lion for being the king of the world.” 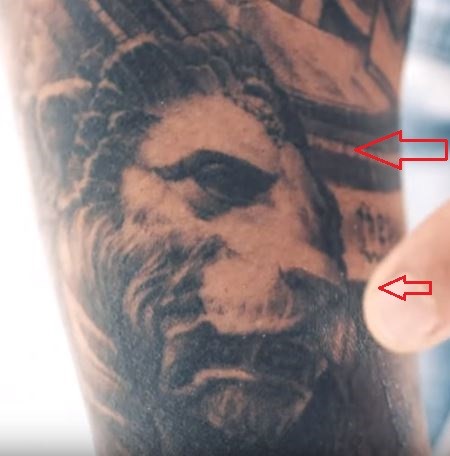 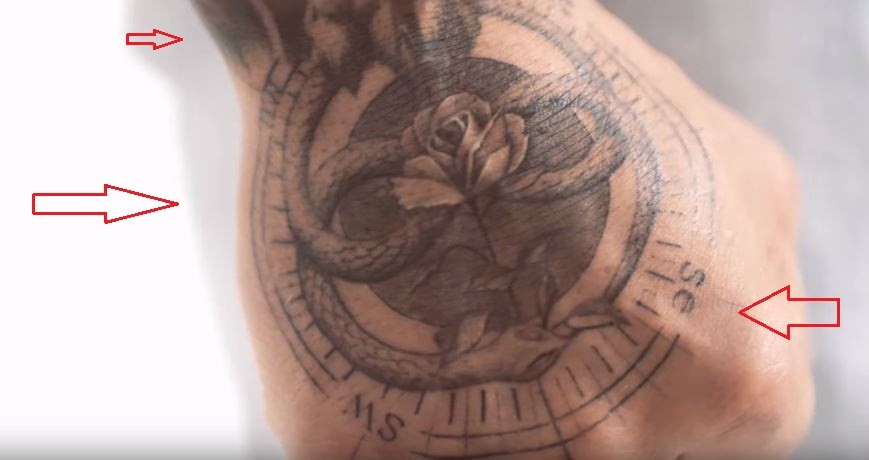 The right hand of Tj Dillashaw contains a tattoo of a globe with a ring indicating different directions. He believes that “World Champ taking over the world that’s why the paws on top of what I would call the globe but it’s the infinity sign made up with snakes and rose in the middle of it talking about how fragile life is but that I will always be the king.” 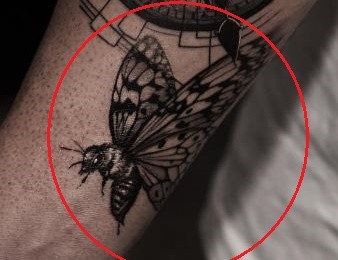 This Dillashaw’s tattoo is made up of the body of a bee but has butterfly wings on it. Moreover, It is on the inner side of his right arm and he interprets the inspiration behind this tattoo. The Butterfly Bee, It’s from Muhammad Ali “Float like a butterfly sting like a bee.” It’s got the butterfly wings but the bee body. 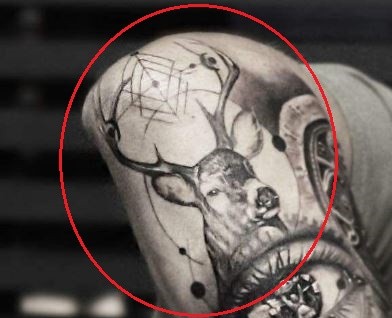 This tattoo is behind his right elbow and he reveals the story behind this piece. “I got a white-tailed deer here. I’m a big-time hunter. I grew up my whole life hunting and providing meat for my family. Whitetail especially because of the symmetrical horns.” 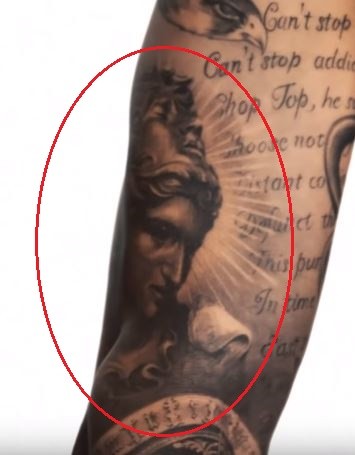 The upper section of his right arm contains the design of a Greek Goddess called Athena. He explains how Athena has helped him in his profession. “The Greek goddess Athena, She’s wearing the Medusa as a helmet. So Medusa was a lady with the snakes in her hair right and Athena is the Greek goddess for war and wisdom which is my profession.”

TJ got this tattoo after McGregor called him a snake in the grass and narrates the story and meaning behind the tattoo. “The snake has been something that has just been passed along.” It’s kind of a nickname I guess I would say now. It was given to me by the Notorious Conor McGregor during the Ultimate Fighter season and so I kind of ran with it and used it against him.” 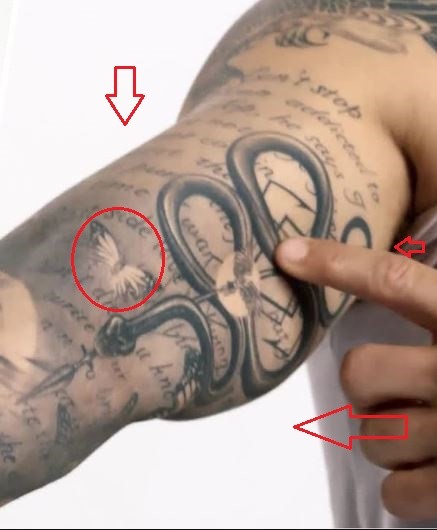 This tattoo is on the right bicep of the former champion that contains a snake with an arrow along with the emblem of the Muay Thai. 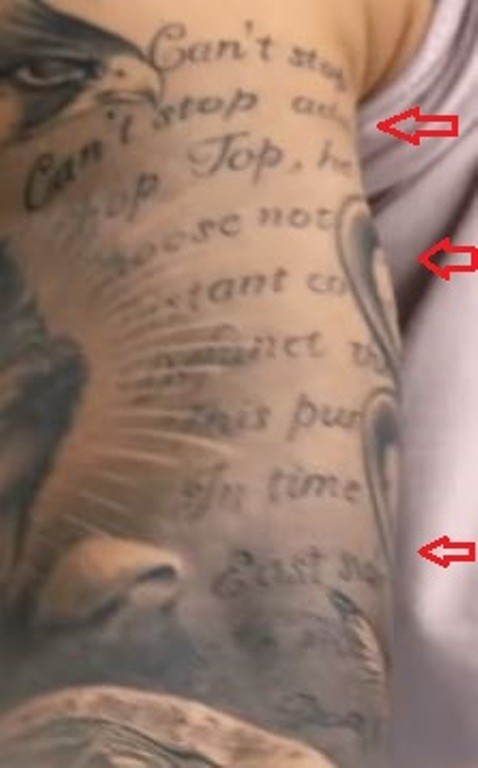 Most fight fans must have noticed that TJ Dillashaw walks out to the same song every time he puts his foot into the octagon. Therefore he describes his love for the song and explains how the lyrics make an impact when he walks out. ”

I’m a big red hot chili peppers fan and I walk out the same song every time Can’t stop. So I have “Can’t Stop” throughout my arm in different locations in the background. This song will always get me pumped up ready for war.” 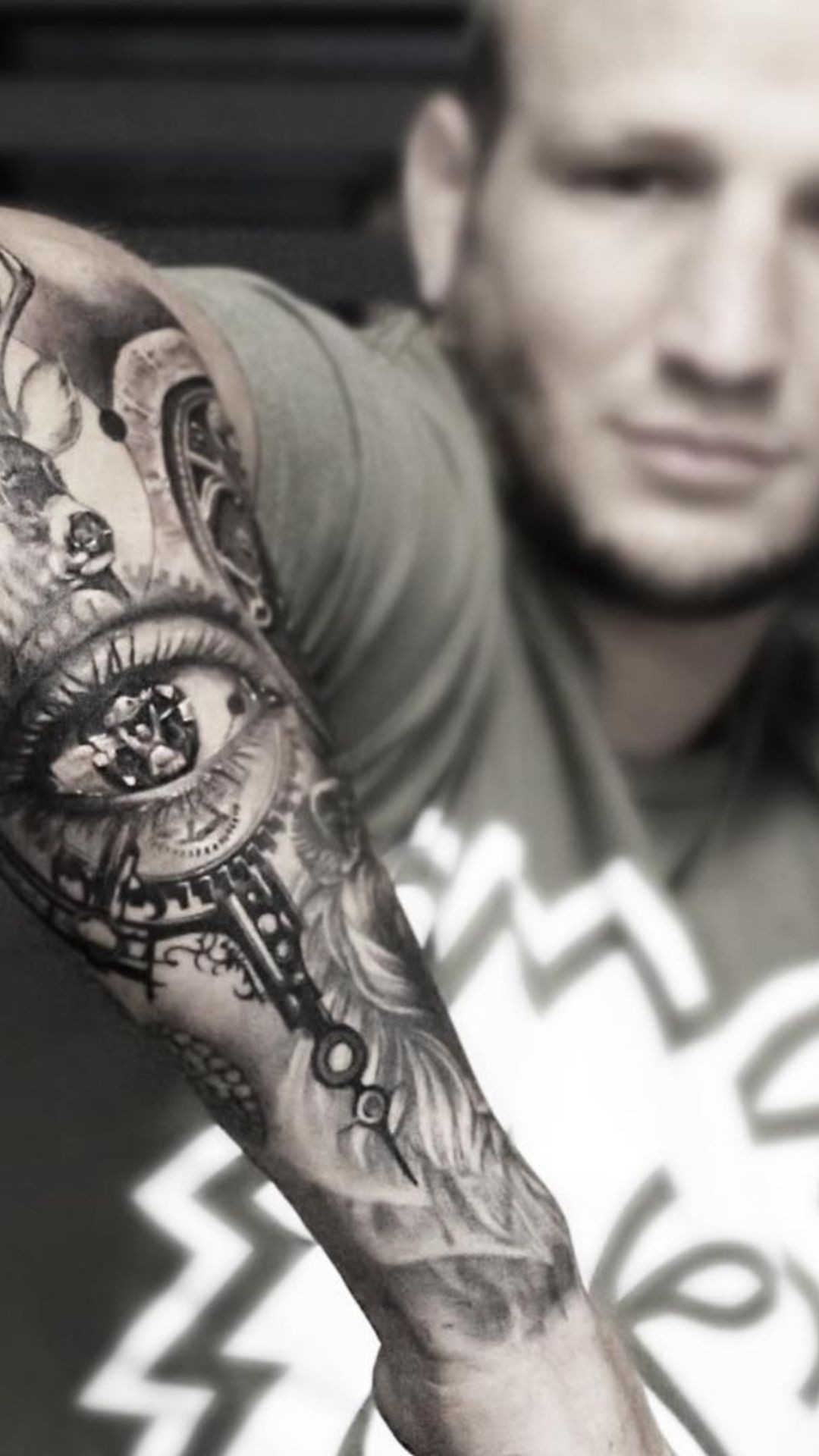 At the end of the interview, he described his last two tattoos. He explained the deeper meaning of his eye tattoo by stating “This is my wife’s eye and the reflection of her eye is me holding the belt up, the night I won against Barao. It’s a pretty epic photo here.” 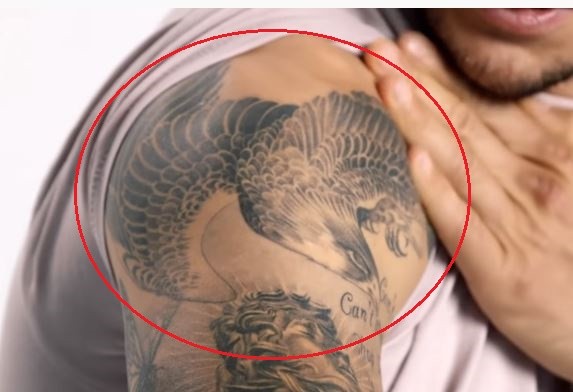 TJ Dillashaw got Hawk done on his right shoulder after winning his title fight against Cody Garbrandt in UFC 217. He expressed his emotion while getting this tattoo done. “I knocked him out in the second round of the fight. A very satisfying win since how much drama was going on with it. Felt on top of the world, that’s why I got a hawk. I know it’s the highest-flying predator, a bird flying high.”

In 2019 TJ Dillashaw recorded a video with a YouTube channel called Inked where he discussed how his tattoo artist makes his idea into reality. Further, he also praised him for making his idea “ten times cooler.” During this interview, Lieutenant Dan was getting inked by his tattoo artist Oscar Akermo. Moreover, he spoke about different topics while getting a tattoo on his leg. Watch the complete interview here.