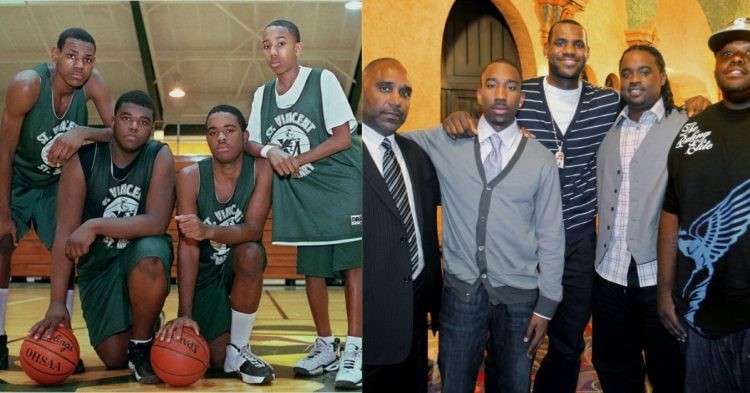 LeBron James has been a part of several basketball teams. He has spent his professional basketball career with the Cleveland Cavaliers, Miami Heat, and Los Angeles Lakers. However, these were not the first teams he has played with ever since he started playing basketball. It is merely common sense to understand that King James would have been part of several teams before actually making it to the NBA.

The 4x NBA champion had a dominant run with a team in high school. While the official name of the team was St Vincent’s St Mary’s basketball team, 4 of LeBron’s close teammates and himself were given the name “The Fab 5“. It is important to know who these players were and the origin story behind this team.

Not everybody has the potential to become an NBA player. Moreover, there are very few athletes who are able to compete at the high school or college level. Therefore, it should be no surprise that the rest of the team is relatively unknown in comparison to the King.

Dru Joyce III, Sian Cotton, Willie McGee, and Romeo Travis are part of Fab 5. They are some of LeBron’s closest friends and his first official teammates. He did not meet them all at the same time, rather the group grew from when King James was about to enter high school and during his time there.

Dru Joyce III is the son of Coach Dru Joyce II. The coach played a huge role in finding and cultivating talent. His passion and interest for the game were passed on to his son. Despite being small in size, Joyce III was an integral part of the Fab 5 simply for his personality and enthusiasm.

Coach Dru was on the lookout for more players. His family went to church and met another family, the Cottons. Lee Cotton, the father was a well-known basketball player in the city. Moreover, his son Sian shared his father’s build and genetic makeup. Therefore, LeBron and Joyce III decided to include him as the third member of their team.

A few years later Willie McGee joined this group. He was from Chicago and came from a family with a lot of problems. He had a brother named Illya who wanted Willie to escape the troubles of their neighborhood. Illya took young Willie to play basketball at Summit Lake recreational center. There he met LeBron and they hit it off. Soon he became the newest member of the group.

This young group soon decided to go to high school at St Vincent’s St Mary’s. There, a sophomore transfer from a public school joined their team. His name was Travis Romeo. When he met the group, Travis was already 6’6 and a threat on the basketball court.

The group was now complete and the team was ready to show the world what they were capable of. In their first two years together they had a near undefeated record and were back-to-back state champions. The dominance showcased by this team along with King James’ stellar play is why he was drafted right out of high school into the NBA.