Sean O’Malley is one of the brightest prospects among the current crop of youngsters in the UFC. After impressing UFC President Dana White in the DWCS, Suga Sean has become a popular face in the sport of Mixed martial arts

The bantamweight fighter instantly grabbed the attention of fight fans and took the whole bantamweight division by storm with his remarkable striking skills and knockout power. Moreover, his personality outside the ring and lavish lifestyle has also resulted in him gaining massive popularity.

Besides, apart from knocking out fighters in the octagon, Sean O’Malley also likes to make a fashion statement with his new hairstyles and tattoos. Consequently, let us try to understand the meaning behind some of O’Malley’s prominent tattoos and hairstyles.

Meaning Behind the 10 famous Tattoos of Sean O’Malley

Sean O’Malley has the word “Suga” tattooed on his face just above the right eyebrow. This word signifies his moniker “Suga Sean” and there is no other reason behind this tattoo. 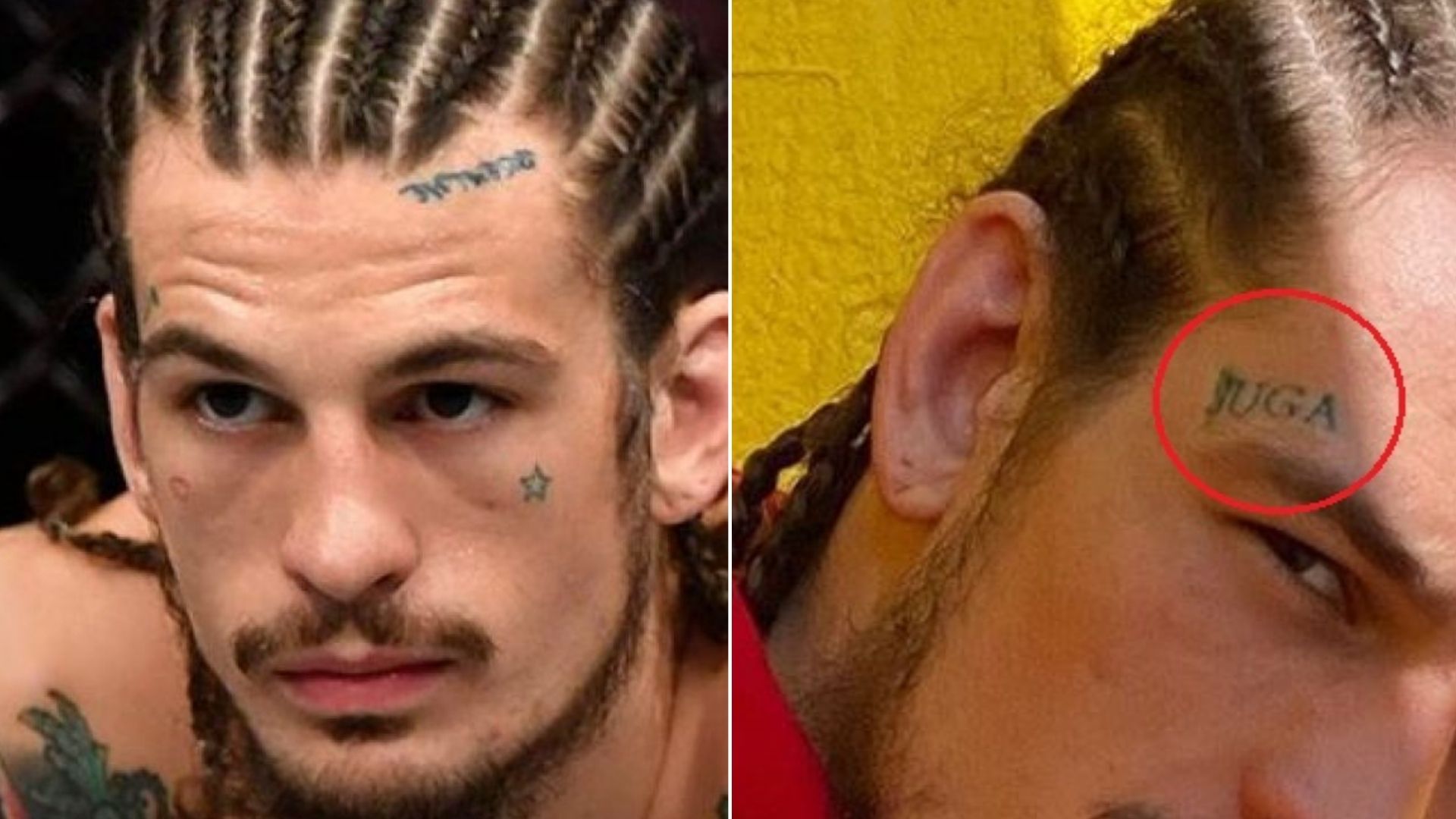 On the left side of O’Malley’s forehead contains a tattoo of the word called Breathe. Interestingly, this word is written in reverse. He revealed the reason behind getting this piece done in an interview. Sean said that “Every time I look in the mirror and I’ve got my hair up, it reminds me to breathe. I got it after I got suspended.”

The left side of Sean O’Malley’s ribs contains a tattoo of the word ‘Akiata’. Suga Show has two tattoos on his biceps with the right bicep containing the phrase “Only God” and the left biceps containing the words “can save me”. Along with the phrase on his left bicep, there is a line running in random patterns. 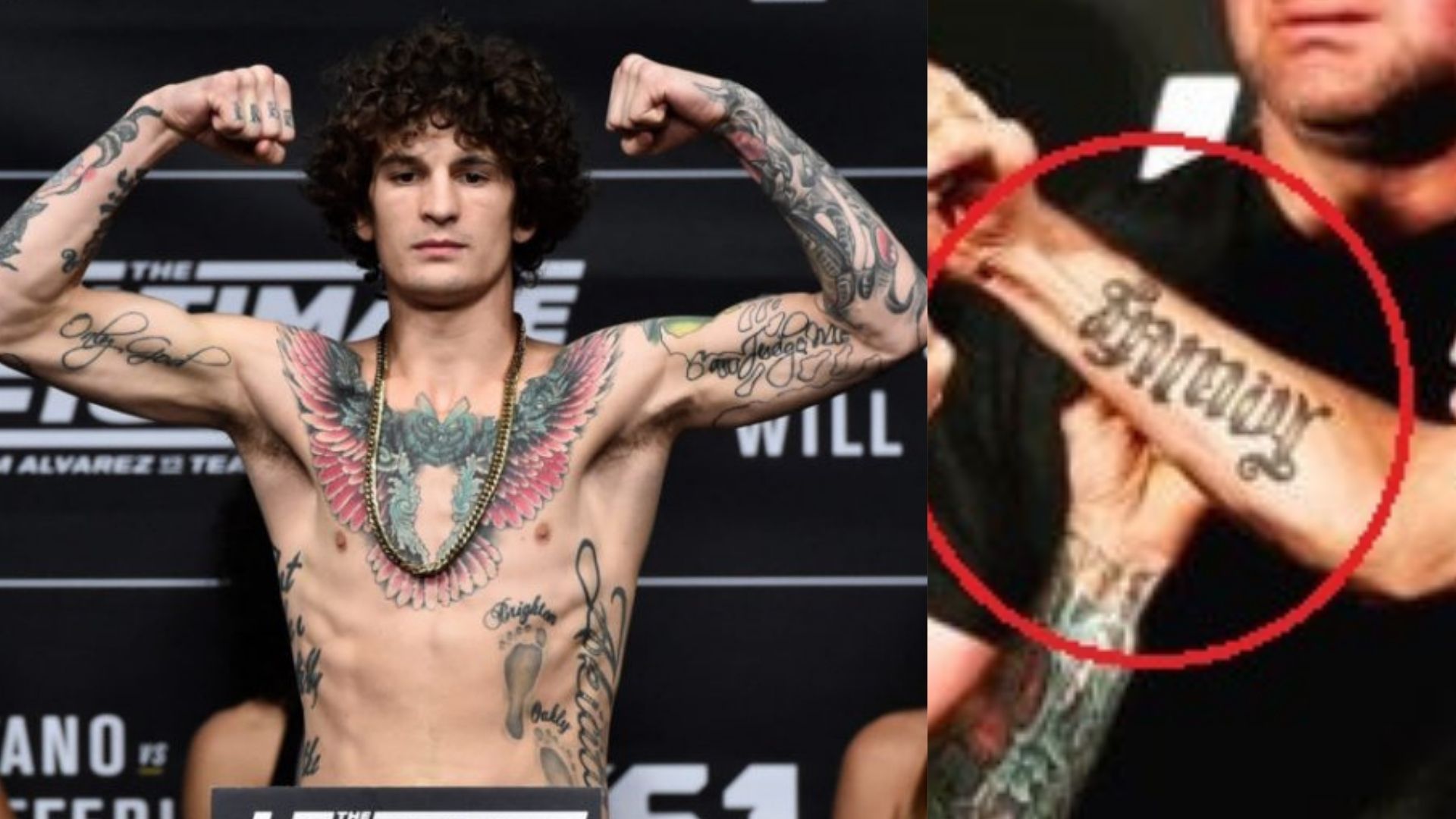 The bantamweight fighter got this tattoo because he truly believes this quote and does not care what his critics have to say about him. He also has a tattoo on the inner side of the forearm that contains the word ‘Family’

O’Malley inked himself with the popular quote called “Float like a butterfly Sting like a bee” on the right side of his body. This tattoo signifies his brilliant striking and excellent record in the UFC octagon. 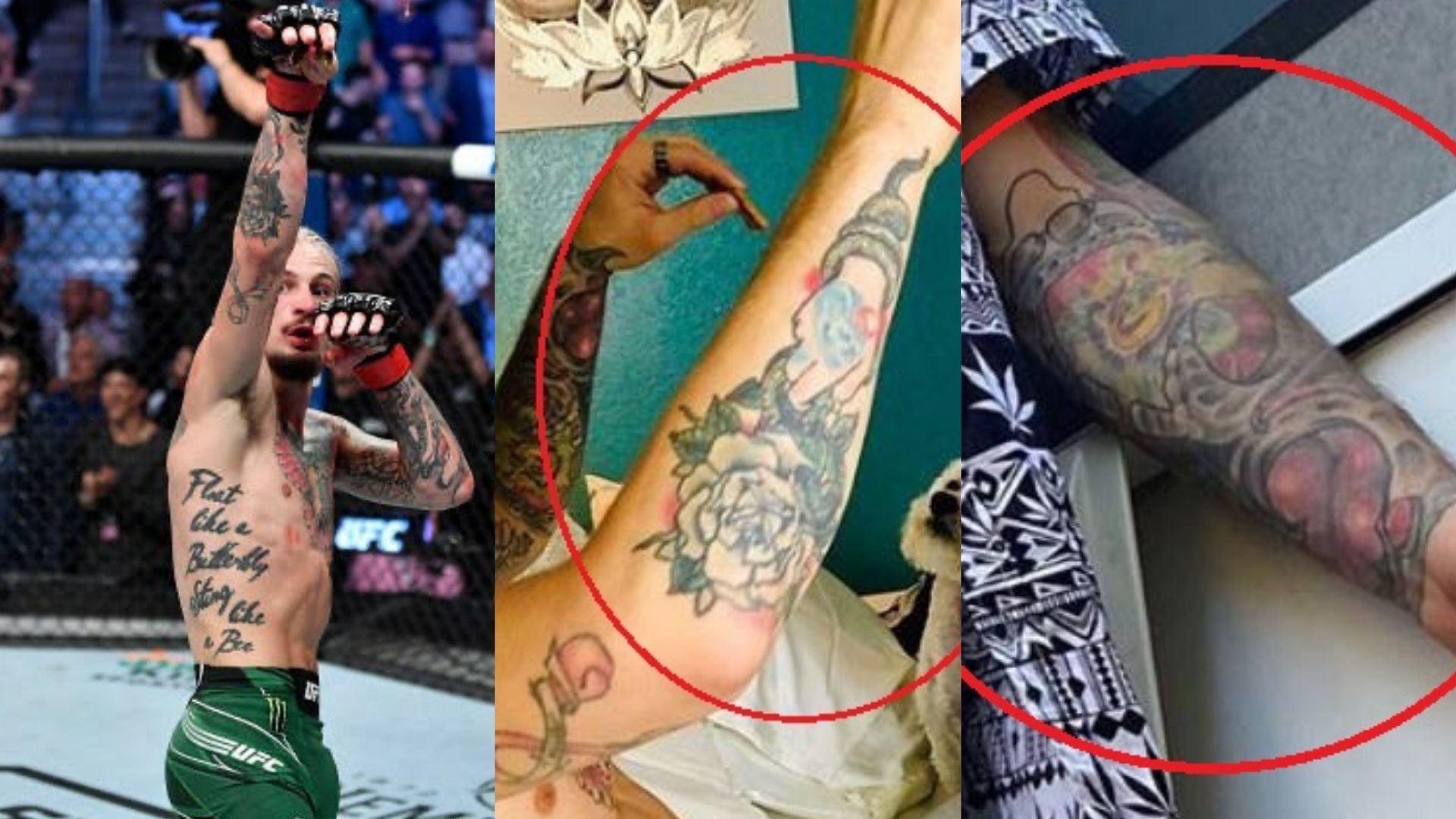 The inner side of Sean’s left forearm contains various tattoos. There are some random designs like hat, a horseshoe, glasses, and a sun emitting rainbow-coloured light. On the other hand, the outer side of his forearm contains an interesting tattoo. There is a layout of a hand wrapped by a snake that is holding a flower.

Sean O’Malley’s chest contains a tattoo of an owl with its wings. This ink piece contains vibrant colours like pinkish red and green. The main reason why he got owl tattooed on his chest is because it signifies wisdom. 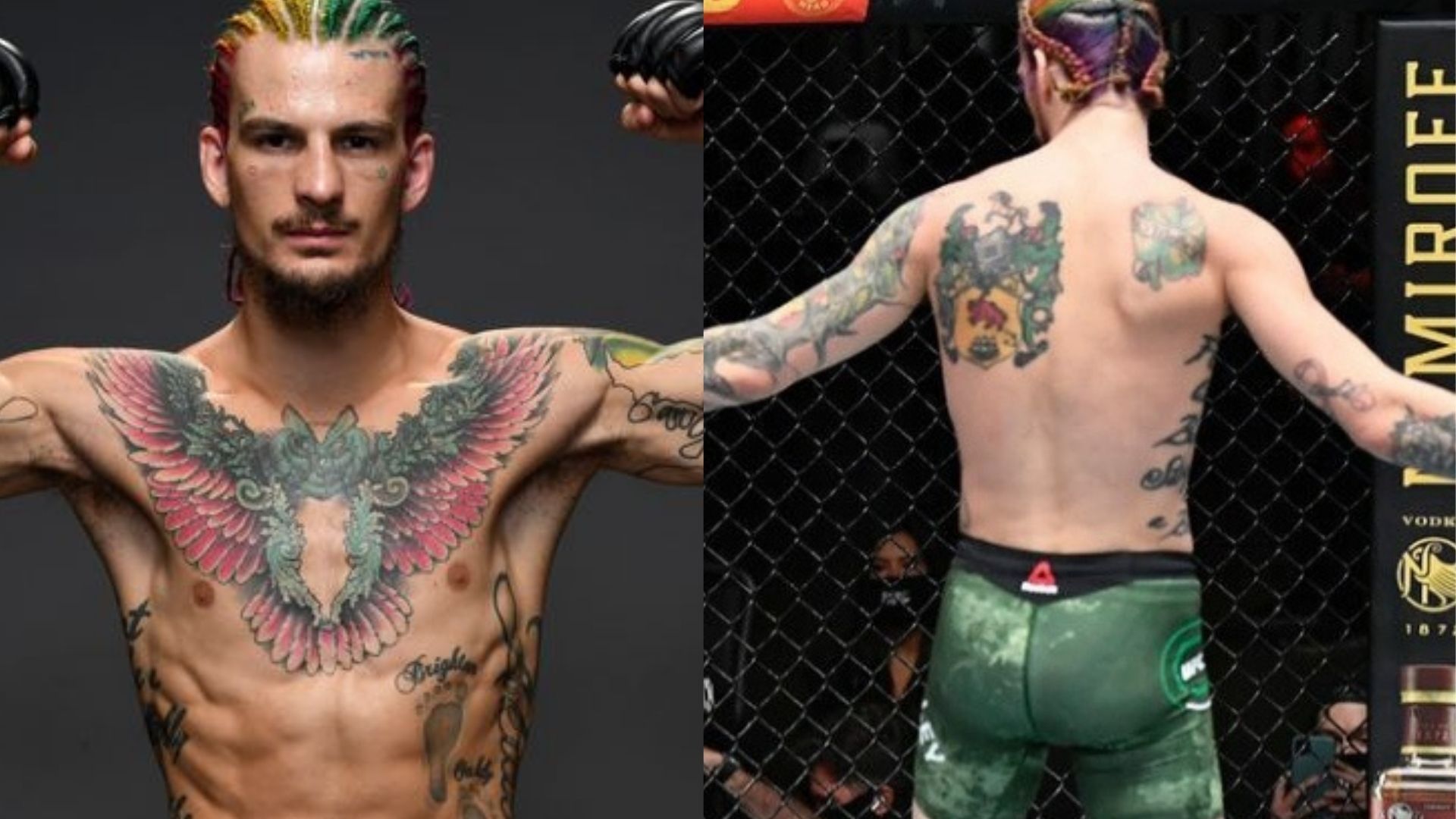 The bantamweight fighter’s left side of the upper back contains a tattoo of his family crest with a wild boar being the central figure of the piece. The crest has huge importance and is quite famous as it is the O’Malley family Coat of Arms.

Apparently, the gold colour on this tattoo signifies generosity and the boar represents the symbol of a warrior. Whereas the red colour on the crest embodies Military fortitude.

Along with the addition of new tattoos, Sean O’Malley also makes it a point to do something funky with his hair every time he steps inside the octagon. Initially the fighter started out with a long curly afro hairstyle for his debut fight in the UFC. 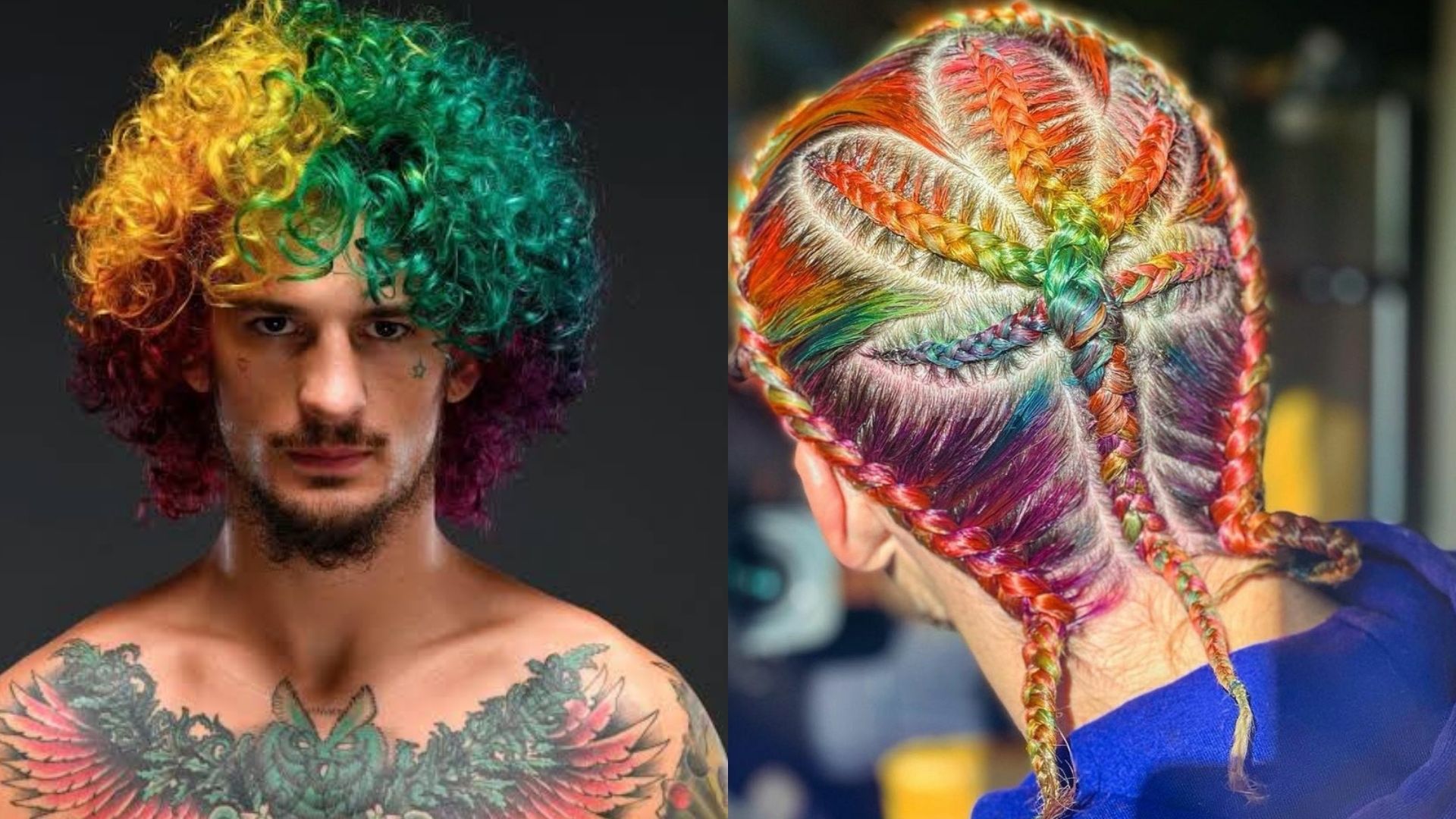 However, as he became popular, the rising bantamweight star decided to chop his hair and go funky. For his fight against former bantamweight titleholder Eddie Vineland, he flaunted the rainbow-coloured hairstyle. Whereas, O’Malley introduced to the world a unique design of braided marijuana leaf haircut before UFC 260.

These are a few of Sean O’Malley’s most popular hairstyles in his UFC career. It is needless to say that he would make a statement by rocking a new hairstyle in the upcoming days.

Coming back to his tattoo pieces, following his brilliant display of striking which led to a TKO victory against Kris Moutinho, Sean O’Malley added a unique tattoo to his body. The bantamweight star celebrated his win with a post-fight pose of a jump shot.

Consequently, Suga Sean has that same image of his jump shot celebration tattooed on his neck. Thus one can expect the rising UFC star to add more tattoos to his body in the future because of his love for art.

The Net Worth of Daniil Medvedev: How Much Has the Russian Earned From Tennis and Brand Endorsements?