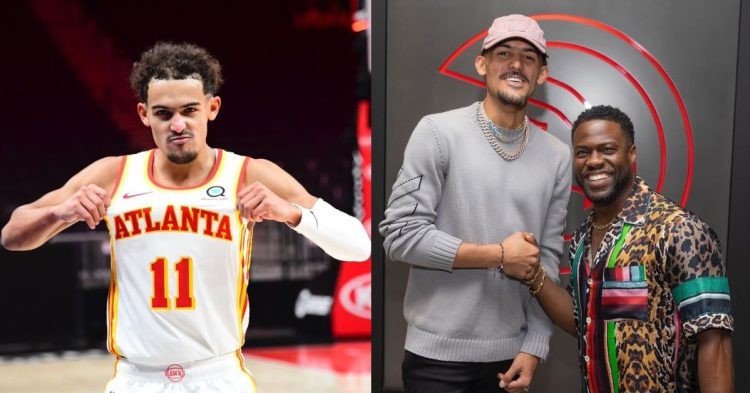 Trae Young is an NBA player who plays for the Atlanta Hawks. Apart from having an presence that cannot be ignored on the court, Trae is the same off it as well. He recently met with an A-lister, Kevin Hart in Atlanta.

Kevin Hart is one of the biggest stars in the world. The American has acted in various movies with many stars like Dwayne The Rock Johnson, Ice Cube and Mark Wahlberg. Apart from being an actor, Hart is also a world-known comedian. He is famous for his stand-up comedy. In fact, his comedic sense and timing made him famous and the person he is today.

The 43-year-old came to Atlanta for his show, Reality Check. It is his first comedy show in four years. On 8th September, he did the show at the State Farm Arena. For those who do not know, that is the home arena of the Atlanta Hawks as well. It was inevitable for the Hawks stars to attend the show. And Trae seemed to be one of them.

After meeting with the Hollywood star, Young shared images of them on his Instagram. In the caption, he mentioned, “1 of 1 Comedian & just person. Appreciate Last Night & Make sure Harry knows he wasn’t the only one so I forgive him… Always Love.”

On the Instagram post, Kevin Hart himself replied to Young. “So good seeing you man….I appreciate the hospitality and the love!!!!!”.

What caught the attention of fans was the height difference between Trae and Kevin in the pictures. One can even said, “you look like Boban next to him”. The player mentioned is Boban Marjanovic, who plays for the Dallas Mavericks in the NBA. According to the league, Marjanovic’s height is 7 feet 4 in.

Another fan hilariously claimed, “I’m sure there are folks that thought Trae Young and Kevin Hart were the same height.” Trae’s listed height is 6 feet 1 in and Kevin is 5 feet 4 in tall.

I’m sure there are folks that thought Trae Young and Kevin Hart were the same height 🤦🏾‍♂️ https://t.co/9Q3OBOOfTr

When you take a look at them separately, you may have thought that both of them were of similar height. However, it seems like Trae is a lot taller compared to the A-lister. The Hawks star is often known as a short NBA player. The average height for an NBA point guard is 6 feet 3 in, leaving Young about two inches shorter.

“Hell Yeah!” – Stephen Curry Reveals He Was Open to Running It Back With Former Teammate Kevin Durant