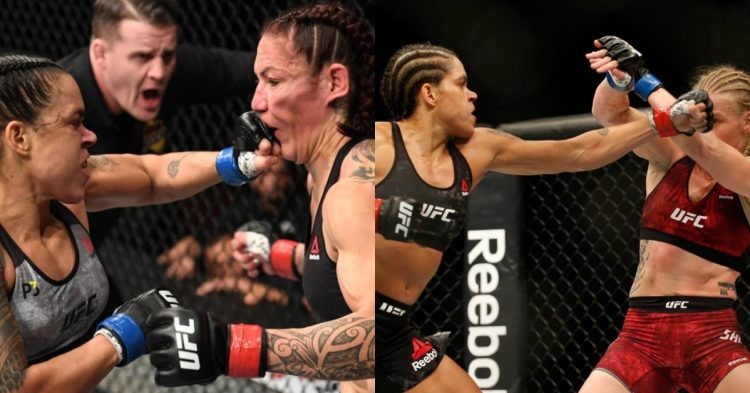 Amanda Nunes is the undisputed GOAT of women’s MMA and one of the greatest mixed martial artists of all time regardless of weight class and gender. Her achievements inside the UFC octagon are countless and hard to beat.

After making her UFC debut back in 2013, Amanda Nunes did face some adversities early in her career. She lost to Cat Zingano and had some close decision wins. However, in the recent years the Lioness of UFC has become an unstoppable force in the women’s bantamweight and featherweight division.

Amanda Nunes has beaten many UFC champions and future Hall of Famer such as Ronda Rousey, Holly Holms, Cris Cyborg, Valentina Shevchenko and Miesha Tate. Her loss to Julianna Pena at UFC 269 was shocking to all the fight fans. However, despite what happens next in her career, Nunes will go retire as one of the greatest of all time.

Amanda Nunes then decimated former champion, Miesha Tate with a first round submission in the main event of UFC 200. Nunes earned a fight purse of $180,000 including $50,000 performance of the night bonus and $30,000 Reebok sponsorship.

Amanda Nunes fought Valentina Shevchenko in a rematch at UFC 215 and secured another close decision win to defend her title. Nunes won $250,000 for her second win over Shevchenko.

Amanda Nunes made history by knocking out Cris Cyborg in the first round and became the first ever female UFC two division champion. For her historic achievement, Nunes earned $440,000 including a $50,000 performance of the night bonus.

Amanda Nunes defended her bantamweight title against Holly Holm and knocked her out with a head kick. For yet another successful title defense, Nunes got a $590,000 fight purse including a $50,000 bonus.

As per reports from Sportsdaily, Amanda Nunes has earned a total of $4,129,500. Now it should be noted that these figures do not include the PPV points she has recieved for her title fights.