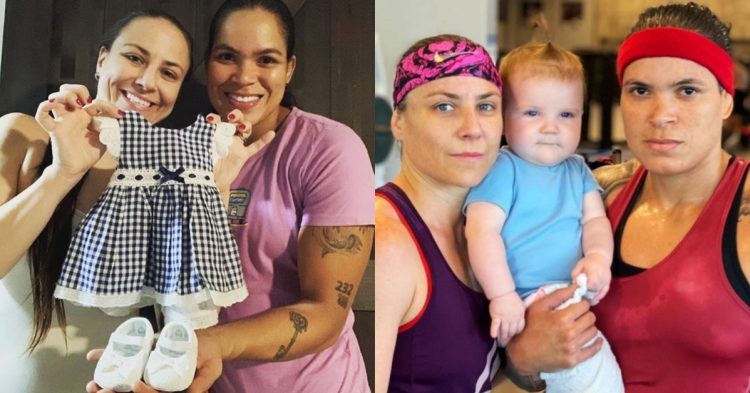 Amanda Nunes will take on Julianna Pena in the rematch of their fight at UFC 269. Their first fight is considered by many as the greatest upset that ever took place inside the Octagon. Hence, Nunes will be motivated to prove the critics wrong and set the record straight.

Nicknamed The Lioness, Amanda Nunes is married to UFC fighter Nina Nunes. Although Nina is not as famous as Amanda, she is a very good fighter in the UFC’s strawweight division. They initially met even before they were a part of the UFC. The couple trained together at Nunes’ former gym American Top Team (ATT). Nina and Amanda hit it off after meeting at the gym.

Amanda Nunes shared a glimpse into her relationship with Nina and stated that they both enjoy each other’s company. They go hard on the training grounds but they do not take their work-related issues back to their home. Because of their bond, they can engage in hard sparring without there being any hard feelings as they are both fighters and they know that it is necessary.

Both of them signed for the UFC around the same time and the couple has stayed together ever since. They got married in 2019. They welcomed a baby daughter into the world in September of 2020. Nina and Amanda named their child Raegan Ann Nunes. Nunes celebrated her UFC 259 win against Megan Anderson with her daughter inside the Octagon.

“Now I feel like the memories. You know, I wanna have all my family with me all the time. Get some pictures you know. Maybe when she grow, she can see. I feel like, for me right now, it’s just collect all the memories that I can to have everything with me and of course (I’m) still the champion. I’m still the GOAT and I feel like this is the thing really driving me forward to stay in the top.”

It is evident from all her interviews that Amanda Nunes is extremely happy with her life right now. She is married to the love of her life. They also have a beautiful daughter together. She is perhaps her happiest at the moment as far as her personal life is concerned.

But the fans have seen over and over again that fighters are often driven by a certain fire inside them. Now that Amanda is settled in her life, has it affected her desire to fight? Although the question might seem unfair, it is a question which is worth asking. Having a child and wife may make take away the killer instinct in a fighter. Is that the case with Nunes as well?

Leading up to the upcoming UFC 277, Amanda has insisted that the reason for her first loss was her knee injury. The injury left Nunes unable to work on her cardio, which eventually left her unable to perform at her best inside the Octagon. Julianna Pena does put a lot of pressure on her opponents, but fans did not expect Nunes to fall victim to the pressure.

However, knee injuries are hard to deal with and it definitely did limit Nunes’ mobility inside the Octagon. She also seemed to have some issues in her camp ahead of UFC 269. Nunes left ATT following the loss and opened up her own gym ahead of the rematch. Apparently, Kayla Harrison got more preferential treatment over her and it left the UFC champ furious.

In case y’all forgot, @Amanda_Leoa is ready to remind you why they call her the GOAT 🐐

So all in all, Nunes had a lot of factors working against her ahead of the first fight. But it looks like Nunes has put all of her problems aside ahead of this weekend’s rematch against Julianna. If she can not beat Pena in the main event of UFC 277, it will definitely make the fans reconsider whether The Lioness is truly the female GOAT or not.