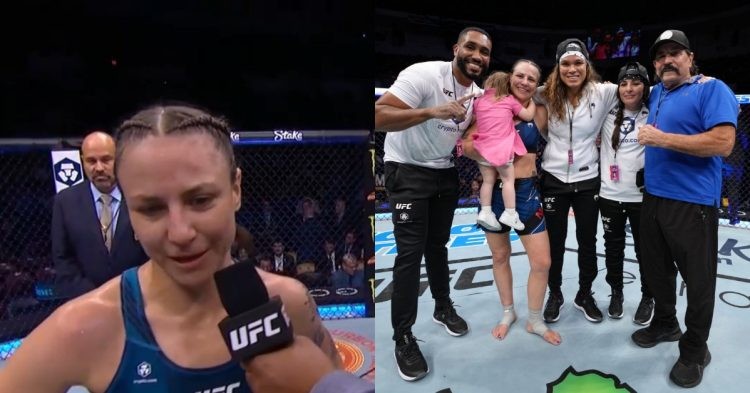 Nina Nunes just defeated Cynthia Calvillo at UFC San Diego. The bout went the full distance and Nunes got the win via split decision. Two judges scored it 30-27 and 29-28 for Nina, while the other judge had it 28-29 for Cynthia. However, the most newsworthy aspect of the fight was Nunes’ sudden retirement from Mixed Martial Arts (MMA).

Cynthia was on a 3-fight losing streak while Nina had lost both of her previous two fights. So there was a lot of intrigue to see which veteran fighter would break their losing streak and get back to winning momentum. The bout was very close and the split decision proves it.

Following the fight, Nunes shocked the fans and announced that she is hanging up her gloves. This was her first fight in over a year and the fans expected her to continue her UFC journey. But it seems like Nunes has other plans.

After earning the 11th win of her career, Nina Nunes has finally had enough of the sport. She started fighting in September of 2010. After more than a decade of fighting, she finally wants to settle down with her wife Amanda Nunes at the age of 36. She became a mother in 2020 and gave birth to a beautiful daughter. In her post-fight interview, Nunes stated that she wants to have more children.

“I mean I feel great at 125 (lbs). It’s where I should have always been. but I want more babies. So I’m stepping away to have another kid.”

UFC Women’s Bantamweight Champion Amanda Nunes was also present in the Octagon during Nina’s retirement speech. Amanda recently fought at UFC 277 and defeated Julianna Pena to regain her 135lbs title. Now it seems like both she and Nina will spend more time together as they plan on having another child.

Nina Nunes retires from the sport with a career record of 11-7 and a UFC record of 5-4. Here at Sportsmanor, we wish Nina all the best with her future endeavour and hope that she spends some quality time with her happy family.