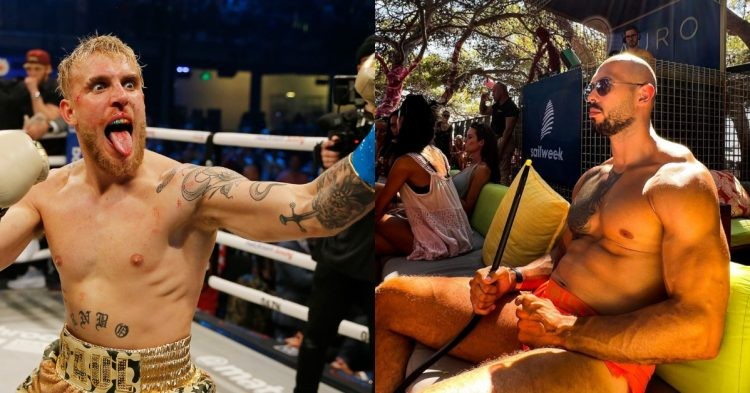 It looks like Jake Paul is already in the talks to fight Andrew Tate next. After his bout against Hasim Rahman Jr fell through, there were whispers of Paul wanting to fight Tate. Now Andrew Tate himself has confirmed that there have been discussions of the fight taking place.

In the lead-up to the Rahman Jr fight, fans were increasingly less optimistic about Jake’s chances of winning against a legit trained boxer. During that, Andrew expressed interest in fighting him. Tate questioned Paul’s victories over UFC fighters like Tyron Woodley and Ben Askren who are way past their prime. He stated that a fight between them would end very badly for the YouTuber.

Now it seems like the bout is actually getting close. According to Tate himself, things are currently in motion. But he refused to share any other detail regarding the matter.

It is a very significant development as a spokesperson from Tate’s camp revealed that there weren’t any talks behind the scenes despite interest. So the recent quotes from Tate seem to imply that the bout may very well be next for Jake Paul.

“I know everyone wants that…these are sophisticated negotiations that involve a lot of parties so we shouldn’t be talking about it on here.” (h/t via The Mirror)

Who really is Andrew Tate?

The fans primarily now know Andrew Tate as a social media influencer. He has over 4.2 million followers on Instagram and he also has over 300,000 subscribers on YouTube. Any podcast that he goes to immediately grabs the attention of the fans. He is into bodybuilding and promotes leading a healthy lifestyle. But, he is also a former combat sports athlete.

According to a report from SportsKeeda, Tate has a professional kickboxing record of 43-9 with ISKA championships in separate weight classes. He also has had 1 pro MMA fight which he won. His Instagram bio says that he is a 4-time kickboxing world champion. But he has not fought since 2020. So it is clear that he has extensive experience in fighting.

On top of that, he also has a great reach on social media and a rabid fanbase. So a bout between two controversial figures such as Jake Paul and Andrew Tate seems like a perfect match-up. The lead-up to their fight will definitely be a spectacle to behold. Both Jake and Andrew are good on the mic and they are very well-matched in terms of size.

Hence, on top of being a spectacle, the fight should be very entertaining as well.

Who will you support if Jake Paul and Andrew Tate end up fighting? Let us know in the comments down below.