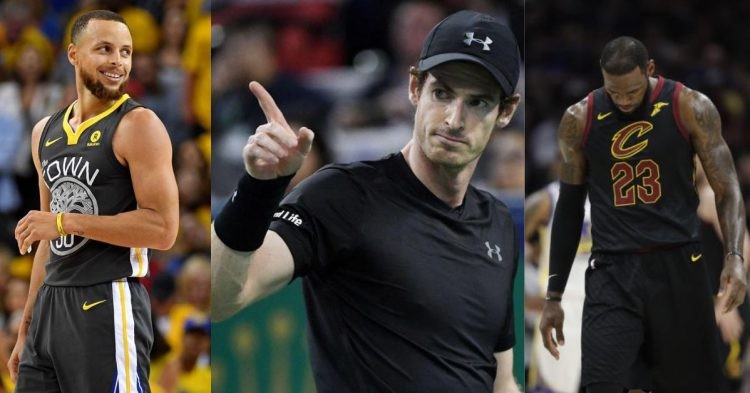 The British tennis player Andy Murray has often referred to himself as the LeBron James of tennis. Ahead of his finals appearance at the U.S. Open, Andy compared his struggles with James’ struggles. It is well known that LeBron won his first NBA title after 9 years of coming into the league.

Andy won his first-ever Grand Slam title in 2012, the year he avenged Roger Federer at the 2012 London Olympics finals. It is quite reassuring when one has similar struggles with another athlete, they tend to support them. However, this was not the case during the 2018 NBA playoffs. Andy was supporting the Warriors on his Facebook post.

LeBron’s greatness was shown in 2018 when he single-handedly carried the Cavs to the finals. It was the second consecutive year since LeBron carried the teams since the departure of Kyrie Irving. However, in 2018, the Golden State Warriors were a super team, and Andy sure sided with LeBron’s opponents that season.

The British tennis player in the past, in 2018 and the 2022 seasons, has shown support for the Golden State Warriors and their MVP Steph Curry. He did share his motivation to keep pursuing his hopes for the Grand Slam, as inspired by LeBron James. He fully backs the Warriors, or so it looks like.

Andy took to Instagram and shared a story of Curry with the NBA trophy as well as the Finals MVP trophy. He captioned the story, “Love this Guy”. It is sure that Andy despite looking up to LeBron for inspiration, supports the Warriors and Curry.

The Warriors won their previous NBA title in 2018, after which the team didn’t look the same. The Warriors underwent a rebuilding stage and had significant injuries which hampered their road to the title in 2019. However, Andy showed his support when the Warriors lifted their 4th title in 2022 after missing out on playoffs for two consecutive seasons.