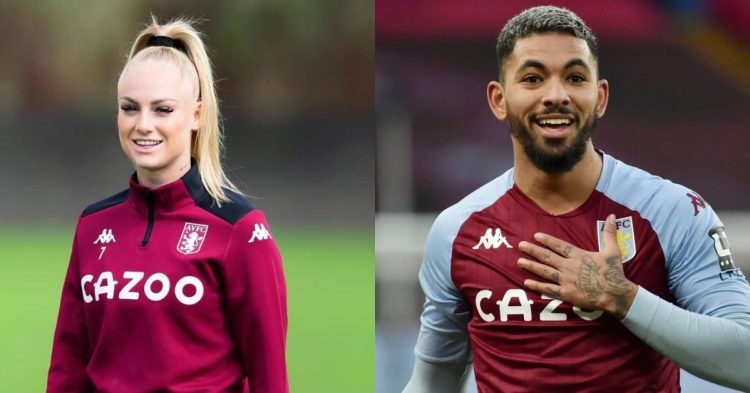 Aston Villa women’s team forward Alisha Lehmann has confirmed that she is in a relationship with Douglas Luiz of the men’s team. The couple confirmed in November 2021 that they were dating. Lehmann previously dated Paris Saint-Germain player Ramona Bachmann.

Lehmann has regularly been subject to sexist remarks related to her appearance. Recently, Milton Neves, a 71-year-old Brazilian TV host, shared a clip of Lehmann celebrating her goal against Man City in Villa’s opening match of the WSL season. Alongside the video, Neves wrote: “Without returning to the video, what number was on her shirt?”

Brazilian Midfielder Douglas Luiz slammed the report, “You are old, (with) years in football, and post a video that doesn’t respect women’s football nor the player who, in this case, is my girlfriend,” his reply read in English. He added, “You never learned what respect is! Damn!” Fans respond in support of Douglas,” The question here is not whether she is Douglas Luiz’s girlfriend, but the disrespect, the woman, the athlete, to women’s football as a whole!

Some even commented Douglas was their ” feminist king” for raging out at the reporter .” We are tired of seeing so many comments like this, imagine her and people close to her.” Respect women in football, The comments are disgusting. It’s bizarre how people have lost their minds. Douglas is there defending his girlfriend and people in the comments just talking sh*t after sh*t.”

One of the most satisfying things in life is turning your passion into a career. Such is the case with Alisha Lehmann. She fell in love with football in her childhood and turned it into her career in adulthood. The young Swiss blonde has become a prominent footballer. Her talent and skills are undeniable, which might explain her impressive career resume.

The star is active on Instagram, making it an excellent platform to see most of Alisha Lehmann’s photos on and off the field. You can also enjoy her fun side on TikTok by discovering her fun videos. She has 8.7 million followers on Instagram.

The footballer identifies herself as bisexual. She was previously in a relationship with Ramona Bachmann. However, after the two called it quits, she started dating Aston Villa’s midfielder, Douglas Luiz.

I absolutely love these two

As per some reports, Alisha Lehmann’s net worth is approximately $1.5 Million. Aside from working with Adidas, Lehmann has also worked with EA Sports. Aston Villa’s Douglas Luiz rages at TV host for posting a video objectifying his girlfriend Alisha Lehmann who plays for the women’s team.