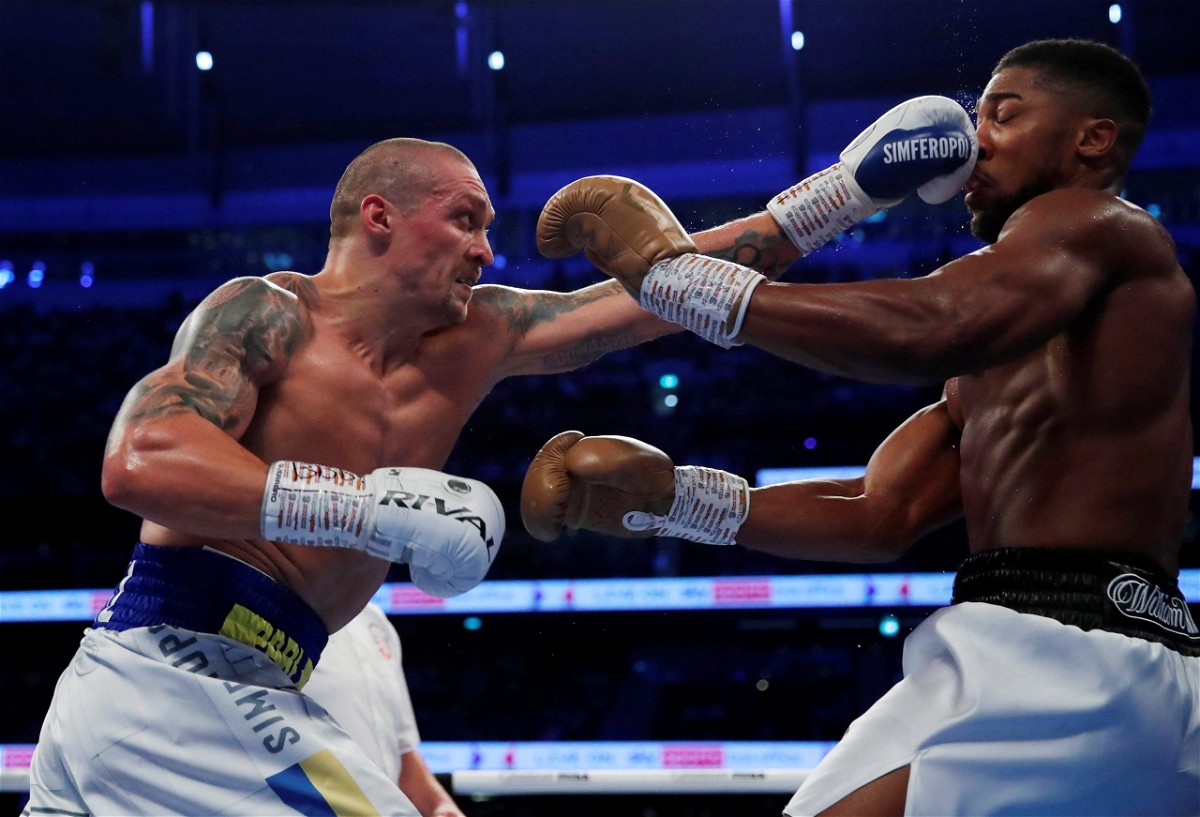 Anthony Joshua will most likely face Oleksandr Usyk for the second time after his plans to fight Tyson Fury were disrupted by Usyk. In their previous fight, Usyk boxed brilliantly to defeat Anthony Joshua and gain a majority verdict with points of 117-112, 116-112, and 115-113.

Usyk (19-0, 13 KOs) won Joshua’s WBA (Super), WBO, and IBF championships by using his unique fighting style. The blend of footwork, head movement, and a quick left hand put Joshua off balance in the 12-round fight at Tottenham Hotspur Stadium in London, England, amidst roughly 70,000 pro-Joshua supporters.

There were times when Usyk injured AJ, but he was wise enough to avoid harm.

It was close fight into the final three rounds, but Usyk stepped on the pedal and fired off combos to win over the judges in Joshua’s neighborhood. In the final round, Usyk stunned Joshua with a left hand and ripped his rival apart with blows till the final bell rang.

When Is Oleksandr Usyk vs. Anthony Joshua 2?

Alexander Krassyuk, Oleksandr Usyk’s promoter, has hinted at an impending statement for the undisputed heavyweight champion’s rematch with Anthony Joshua. The two London 2012 Olympians are slated to reprise their battle in the spring, however a date, location, and venue for the second match are still to be determined. Krassyuk, Usyk’s promoter, has indicated that the specifics of their much-anticipated rematch will be announced soon. He said to Sky Sports:

‘”Many things are happening at the moment. Soon we will unveil everything.”

Recently there was a speculation which Krassyuk shared that turned out to be true. Krassyuk  said:

“I heard that Joshua could consider stepping aside if the money is right as he feels respect to the division and is willing to let the undisputed heavyweight championship happen.”

Anthony Joshua is expected to take a £15 million walk-out fee in order to make room for Oleksandr Usyk vs. Tyson Fury. Last year, Joshua dropped his heavyweight world crowns to Usyk, while Fury fought Deontay Wilder to retain his WBC belt. The two will now compete for the undisputed heavyweight belt, which is expected to take place in the Middle East. The Principality Stadium in Cardiff has also been booked for March 26.

“Before you know it, it’s going to be February and these fights take a lot of organising. For us, the preferred date and venue for that fight will be the UK, in which case we would have to do the fight outside, so we’re not really interested in doing that fight in March.”

But now things seem to change. Joshua intended to utilise his rematch clause against Usyk, but according to The Telegraph, he is ready to accept a significant sum to put it on rest. Joshua’s promoter, Eddie Hearn, now stated that while they are still negotiating on a rematch with Usyk, a significant step-aside pay might cause them to probably step aside.

Even purse bids for Fury’s obligatory opponent, Dillian Whyte, have been postponed three times. However, Whyte is expected to be paid a large sum of money to step down as well and likely seek £5 million.

Talking about this Frank Warren, one of Fury’s promoters, revealed:

“It’s a saga but if we can keep things between us, we can get something over the line one way or another. Everybody in boxing wants to see the undisputed fight between Tyson and Usyk, I want to see it just as a fan. So that is the fight we are trying to make.”

On the other hand, Joshua’s promoter, Hear said to Boxing Social:

“We are all still moving toward Joshua vs Usyk and Fury vs Whyte but there are still people who would like to see Fury vs Usyk for the undisputed and would be willing to pay a lot of money for it.  If there is a lot of money in the pot and there can be a plan put in place to make all the fighters happy then there is a chance it can happen, but the problem is time. Talks were ongoing for Fury to fight Usyk and AJ to fight the winner but then Dillian Whyte got called as mandatory and had to come into the talks, which made it a lot harder and everyone gave up. The plan now is AJ vs Usyk and Fury vs Whyte but those other talks do still rumble on, if I had to bet on the next fights that take place, it would be the two scheduled fights taking place. But there is a strong desire to find a way to have an undisputed fight with AJ fighting the winner – and without Dillian I think this would have happened.”

But then again in a Twitter video that Joshua posted, refutes the monetary deal that everyone is talking about and that is posted by The Telegraph as well:

“You know what’s bad about the videos I see. I see certain interviews that quote what I said. Think to myself, I ain’t done no interviews where did this person get this information. I am hearing people saying AJ accepts £15 million to step aside. I ain’t sign no contract, I ain’t seen no contract. So, as it stands, stop listening to bullsh** until it comes from me. I am the man in control of my destiny. I am the man who handles my business. I’m a smart individual and I make calculated decisions every step of the way. Don’t listen to bullsh** from other interviews. If I tell you something, that’s real”

Therefore, it seems that Anthony Joshua vs. Oleksandr Usyk 2 still remains unsure as everybody seems to vote for an Usyk  vs. Fury match with Joshua and his manager having an uncler statement about the rematch.

Expanded Coverage, Exclusive Content, and More as PFL Extends Its ESPN Deal by 2 Years, Regular Season to Kickstart on April 20