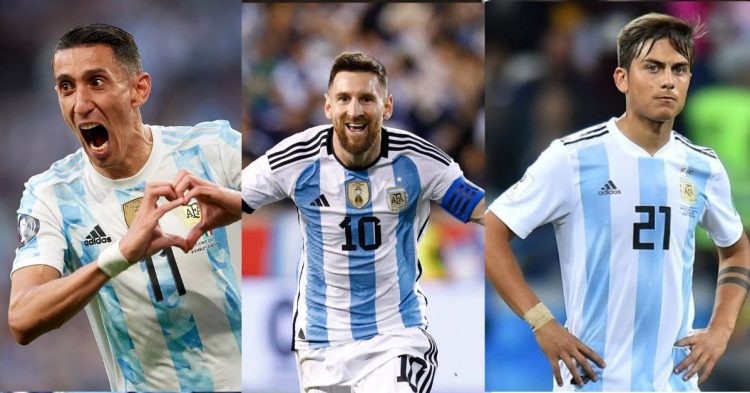 The World Cup is always the platform every player wants to perform on, whether it be Lionel Messi or some amateur footballer. Although players like Lionel Messi, Dybala, and Di Maria are finding it difficult to play for Argentina because of their injury situations. It is no wonder that Argentines feel miserable watching their stars injured.

Messi is already 35 years old and Angel Di Maria is 34 years old, and it is unlikely that they will represent their national side in the 2026 World Cup. Messi was even out for his Champions League match against Benfica, which ended in a draw.

Only 40 days remain to recover for Lionel Messi, Dybala and Di Maria

Paris Saint-German manager Christophe Galtier revealed in a press conference about Messi’s situation, “He asked to be replaced during the Champions League game He has a little problem with his calf but he will be back to training on Sunday,” Although the injury seems minor, it could affect Messi’s performance at the World Cup, which is less than 40 days away. Messi is having a wonderful season in Paris as he has already scored 2 Champions League goals in 3 matches and 5 league one goals in 9 matches.

❌Dybala injured & may be out from world cup
❌Messi injured & rested (missed 2 matches)
❌And now Di María is injured.

Di Maria sustained the injury during the team’s 2-0 loss against Maccabi Haifa. Juventus have also confirmed that Di Maria is out for 3 weeks due to a hamstring injury. Tests on Di Maria on Thursday “indicated a low-grade injury to the right hamstring.” Many fans believe that Manchester City’s new signing, Julián Alvarez, could be the best replacement for Di Maria.

Dybala scores for the 5th game in a row but gets injured while doing so.

You can’t make this up.pic.twitter.com/Q3Yqq1xZNe

Paulo Dybala also got injured while taking a penalty against Leece in a Serie A match. Dybala scored to make it 2-1, but immediately after celebrating with his teammates, he was taken off to need medical attention. Roma manager José Mourinho revealed about the injury, “I say bad, but I think very, very bad. I am not a doctor, but in my experience and speaking to Paulo, it’s unlikely we’ll see him this year.

As Messi, Dybala, and Di Maria got wounded, fans expect young players like Lautaro Martínez and Julian Alvarez to play for the country. As the news spread, fans sent their best wishes to the players for a healthy and fast recovery. They hope the players get back on track, which is slightly doubtful as some injuries can take up to 2-3 months to heal.

🚨 Messi’s injury looks more serious than expected, he could be out for 1.5-2 months and might miss the World Cup. It’s not looking good for Argentina with both Messi and Di Maria out injured.

Fans have tweeted sad emojis and feel like their luck is bad for the Qatar World Cup, which starts in less than 40 days. Some even believe it is a curse for the South American nation. Many people have said that the World Cup would be incomplete without the GOAT Messi.

Di maria getting injured in such crucial time seems inevitable💀. Lord have mercy. He couldn’t play 2014 final as well. Both Dybala and Di Maria in span of 2 days… unreal! Hope everything goes well considering WC being just 40 days away. #argentina pic.twitter.com/pnkwnCiFVW

While others have faith that the trio will be back soon. Some people worry about Di Maria and Dybala because their circumstances appear to be extremely difficult, even though some claim that Messi’s condition is not that serious.