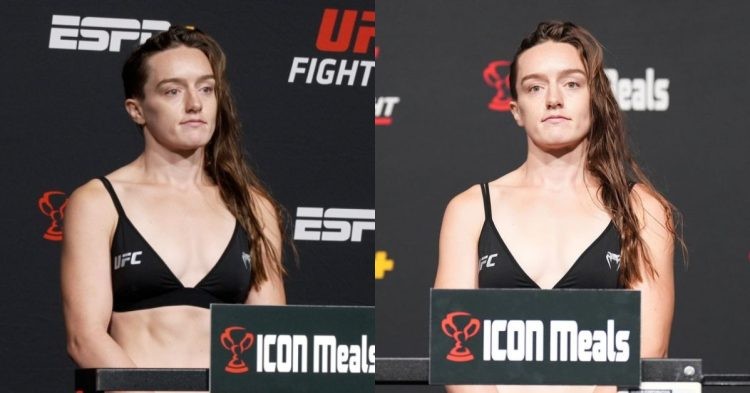 Aspen Ladd and her struggle to make weight continues as she misses weight for the third time in her UFC career ahead of her upcoming three-round strawweight bout against Sara McMann. This highly anticipated matchup was supposed to take place at the prelims of UFC Fight Night: Sandhagen vs Song.

However, with Ladd failing to make weight, the fight is in jeopardy as it will be upon Sara McMann whether she accepts to fight at a catchweight bout. During the weigh-ins of the event, The American bantamweight contender stepped on the scare and weighed in at 138 pounds which is two pounds over the non-title limit of 136 pounds.

Aspen Ladd took another L in her battle to make weight as she came in heavy for her bout vs. Sara McMann.#UFCVegas60 | Results: https://t.co/lSFZrSdywM pic.twitter.com/It3CeIT69T

As per a report, the doctor didn’t allow Aspen Ladd to take an extra hour to cut weight as they didn’t want the bantamweight contender to have any health problems before stepping on the scales.

It is needless to say that Aspen will be fined for making weight. However, the amount or percentage of the fine has not been disclosed by the UFC yet. With that being said, Ladd’s career would be under massive threat despite having great potential as missing weight regularly will not go down well with the UFC.

There is no doubt about the potential of Aspen Ladd as she has proved herself inside the octagon. However, missing weight prior to her fights against Leslie Smith and Macy Chiasson and now ahead of her UFC Fight Night matchup against Sara McMann has made fans doubt her professionalism.

Consequently, there will be serious question marks raised after exceeding the weight limit for the third time in her UFC career. Ladd has a history of bad weight cuts and it is becoming dangerous. Owing that she almost collapsed ahead of her bout against Germaine De Randamie back in 2019.

In her seven-year professional MMA career, Aspen Ladd has missed weight four times and it appears that it’s time for the 27-year-old fighter to move up a weight class and compete in the featherweight division.

If Aspen decides to stick and compete in the bantamweight division, she needs to approach the weight cut differently and hire a new nutritionist. Do let us know in the comments section below your thoughts on Aspen Ladd missing weight ahead of her upcoming matchup against Sara McMann.