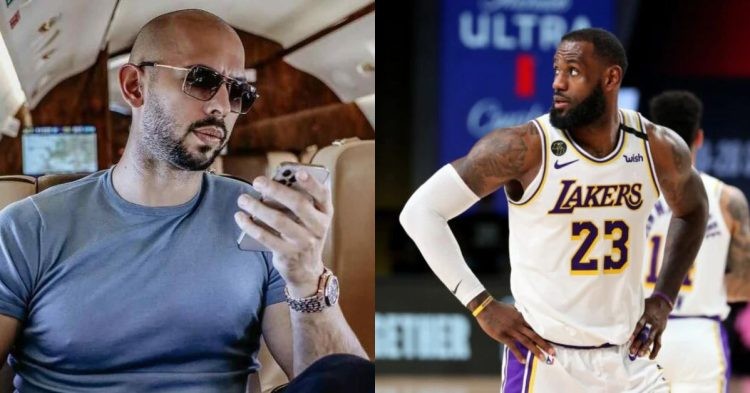 Andrew Tate has been one of the most-talked-about individuals in the last year or so. He initially shot to fame after appearing on UK’s Big Brother. He caught the world’s eye with his controversial comments and did the same on many other occasions as well. Similarly, Tate has made another comment that might infuriate NBA and LeBron James‘ fans. To be specific, it looks like he isn’t a huge fan of basketball.

The sport’s fans will know how deep their love for it is. For example, their favorite team could lose in the worst way possible in Game 7 of the NBA Finals when the series is tied 3-3. But fans will still support their franchise as their life depended on it. It would be safe to claim that basketball is one of the most passionate sports in the world. It is up there with soccer, football, and many other sports that billions love.

Tate, or also known as the ‘Top G’ by his fans, often features on YouTuber Adin Ross’ streams. This was no different. During one of Adin’s streams, Tate let it slip that he isn’t a fan of basketball. When Adin asked if he liked basketball, he answered, “Basketball is bullsh*t.” This was when Adin replied, “What do you mean it’s bullsh*t, you don’t like LeBron?”

Tate said, “Nah, it’s gay. Basketball is gay. It’s just, put the ball in the net, I mean, where’s the fun in that?” His comments must have come as a surprise to the billions that love the sport. An interesting point to take away from his comments is that he ignored Adin’s question about whether he liked King James. Together with that, his comments claiming the sport is “gay” might offend the LGBTQ community as well.

With that said, we should remember that we are all entitled to our opinions, no matter how absurd they might sound at times. But it should be remembered that there is a way and method of expressing one’s self. Tate has found himself in hot water plenty of times in recent months. He also attracted the attention of NBA fans recently, when he claimed Meghan Markle slept with NBA icon Dwyane Wade.

His comments against the sport of basketball might remind fans of the time when UFC President Dana White took a shot at soccer without any reason. Tate has done the same as well. Whatever the case, as mentioned earlier, the sport is one of the most watched in the world, and it’s only safe to say that Andrew Tate is entitled to his own opinion.