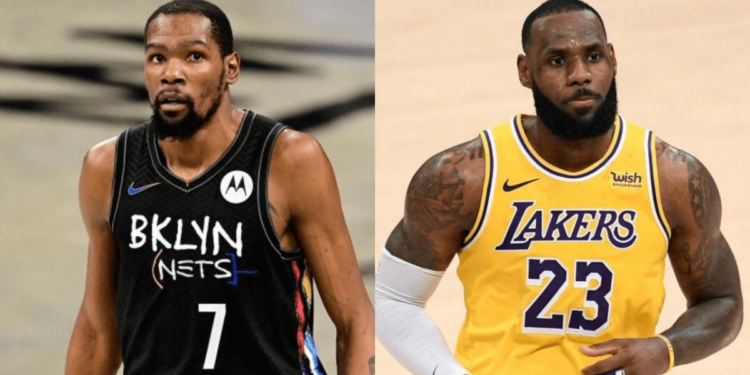 Brooklyn Nets Superstar Kevin Durant was sidelined after a career-threatening injury in the 2018-19 NBA playoffs. Durant missed the regular-season games prior to the hiatus and decided to sit out NBA restart in the Orlando Bubble as well. After losing Kyrie Irving to a shoulder injury in February the Brooklyn Nets fell down to 7th seed in eastern conference after the seeding games. Although their playoff spot is fixed, Brooklyn Nets will struggle against defending champions Toronto Raptors without their star players Kevin Durant and Kyrie Irving in the first round of playoffs.

While Brooklyn Nets are grinding in the Bubble in Orlando, KD stepped out to buy some sneakers with the Cool Kicks crew. He is not known for backing down from responding to trolls or any kind of criticism for that matter. The Cook Kicks brought up the banal topic of “Who is the GOAT?” and their response left Kevin Durant in disbelief.

One of the crew member claimed LeBron James to be the greatest player of all time to which Kevin Durant responded saying “LeBron James? That’s crazy”. It certainly looked like they brought it up to spark a reaction from KD and he is not the one to back down from a conversation like this.

Also Read: “Real ones do things others are afraid to do”- EJ Watson Heaps Praises For Damian Lillard

While players try their best not to engage with trolls on Twitter as instructed by their PR team, Kevin Durant does not abide by this rule. In response to a slanderous podcast, KD stepped out of the line by following a fan’s girlfriend on Twitter and liking her pictures. However, this Twitter fan did not back down and called Kevin Durant out by sharing screenshots. He went on to say that his girlfriend felt uncomfortable and blocked KD.

Look at this beta male wierdo now he went and followed my girl. LMAOOOO. KD is a certified WIERDO pic.twitter.com/vPzWOondD0

After being called out KD gave a generic excuse:

“my bad, I accidentally pressed follow and liked all her pics, my phone tripping”

Durant may have overstepped his boundaries by following someone’s girlfriend on twitter just to get back at him for criticism. He is known to have multiple burner accounts to defend himself on Twitter especially after backlash for signing with the Golden State Warriors in 2016. If LeBron can end his career without responding to analysts like Skip Bayless, KD can certainly ignore trolls on Twitter.

“We Plan to Win” – Conor McGregor Ahead of Marathon Endurance Race