Miami Heat has taken the entire league by surprise this season under the leadership of Jimmy Butler giving tough competition to top seeds in the eastern conference. They slipped to 5th seed after going 3-5 in the bubble in an attempt to finalize their staring lineup for playoffs, giving bench players extra minutes on court.

Jimmy Butler is known to be a tough teammate with multiple instances of lockerroom beef over the years. He requested trades from Chicago Bulls, Minnesota Timberwolves, and Philadelphia 76ers stating incompetency and lack of motivation in teammates as the reason. However, he seems to have found his groove in Miami as the leading scorer in the team.

In conversation with ESPN sideline reporter Rachel Nichols, Jimmy Butler expressed his views on what transpired between Miami Heat and Oklahoma City Thunder on Wednesday night. Chris Paul threw the ball at Duncan Robinson in frustration right in front of Jimmy Butler when OKC was down four. In an attempt to establish team solidarity, on the very next trip down the court, Jimmy made sure Thunder felt it from him.

Butler bulldozed into Chris Paul on purpose committing an offensive foul. Although, Chris Paul and OKC had the last laugh as they concluded the game 106-105 in their favour. Rachel Nichols asked if they connected after the game to which Jimmy Butler responded:

“I just don’t like you picking on my young fellas like that. I felt you didn’t have to do that. I don’t care, I don’t need friends here in the bubble. I barely ou of my room. I’m in my room minding my business. I’m not gonna see anybody.” 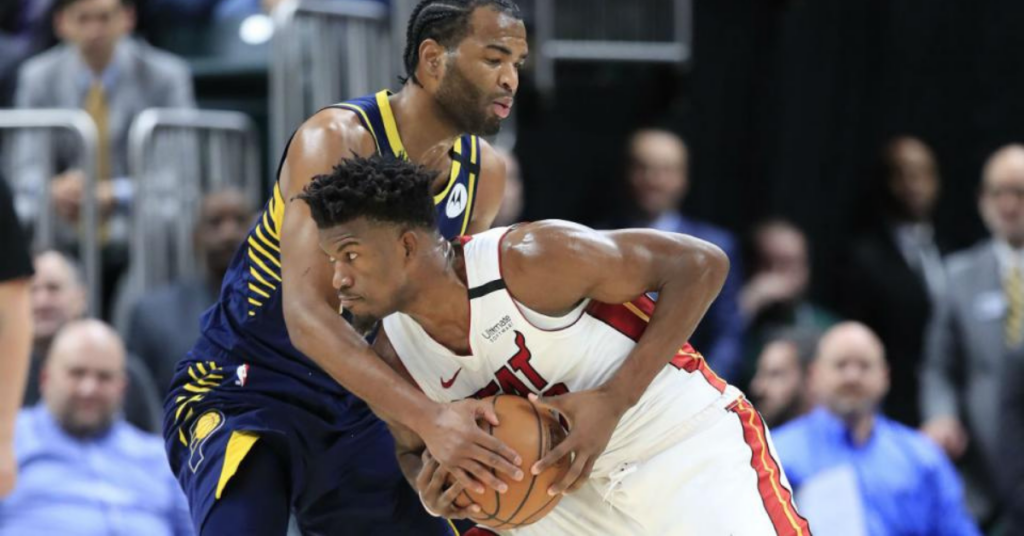 “I guess there’s some history between Miami and the Pacers and you inherit that the second you put on the Miami Jersey or a Pacers Jersey for that matter. We embrace it we don’t run from it.”

While discussing first-round playoff matchup against the Indiana Pacers, Jimmy Butler shed light on years of Heat-Pacers rivalry. In January, an argument between Jimmy Butler and TJ Warren which led to some derogatory post-match comments has spiced up this round 1 playoff matchup.

“I am scared of nobody, he is not even in my fu*king league, he is nowhere near me. If I was a coach I would never put him on me, ever again.”

TJ Warren is playing at an all-star level averaging 30+ points in the bubble, leading Indiana Pacers past Miami Heat in the eastern conference with 6-2 record. Pacers lost 3 out of 4 games against Miami Heat in the regular season, however, bubble Indiana is not what it was pre-hiatus. They are already playing with playoff intensity but Jimmy Butler doesn’t think they have what it takes to beat Miami.

Butler says they have all the right pieces to win the series against Pacers as well as to win the championship even though they are not the title favourites this season.