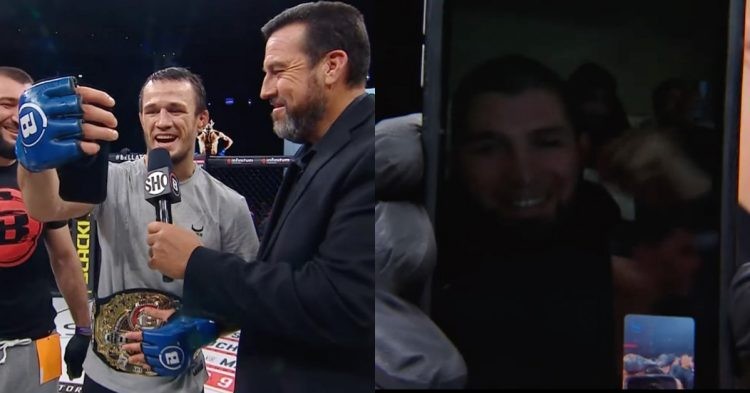 The eyes of the MMA community were on Bellator 288 as Patricky Pitbull defended his lightweight title in the co-main event. His opponent was Usman Nurmagomedov, the cousin of UFC lightweight legend Khabib Nurmagomedov. Pitbull had a record of 24-10 and Usman had a stunning record of 15-0. Was Usman able to dethrone the champ? Let’s find out.

⏰Co-main time is NOW! 👀Will the Champ keep his belt or will the Challenger get the W?

When fans think of Khabib, their minds immediately go to dominant wrestling and great submissions. But Usman is not a one-trick pony and has fantastic striking to go along with his elite wrestling. Pitbull is known for his devastating striking. But he could not even get close to Usman in round 1. Usman kept him at bay with some great kicks.

Neither fighter was particularly aggressive, but Usman landed the kicks which Patricky had no answer for. Round 2 started out the same way as Nurmagomedov constantly threatened Pitbull with kicks. But, the action started to pick up when Nurmagomedov landed a massive takedown only two minutes into the second round. Usman rag-dolled the Brazilian on the mat and landed some big elbows to finish the round.

The 36-year-old champ seemed out of ideas and looked lost in front of a generational talent like Usman. Patricky tried to engage and close the distance at the beginning of round 3. But he was almost taken down for his troubles. Usman was extremely relaxed in the cage as he knew that it was Patricky who needed to push the pace. Hence, the 24-year-old controlled the range beautifully and waited for Pitbull to rush in.

Patricky never looked like he was comfortable in the cage. From his movement to his offense, everything looked very labored. Nurmagomedov showed his intelligence and shot for a takedown immediately at the start of round 4. Although he did not get the takedown, it was a warning sign for Pitbull. It obviously had a big impact on Patricky as he spent the rest of the round on the back foot.

What a round for the challenger @Usmannmgdv 👏#Bellator288 lightweight title fight is LIVE now on @Showtime.@BellatorMMA #bellator pic.twitter.com/cbXtINfhZ6

Usman also had the height advantage over Patricky. So it was even harder for Pitbull to land anything meaningful. With only 5 minutes to go, Pitbull had to put his foot on the gas pedal. He did just that as Pitbull landed a few good punches and he put Usman on the backfoot. But that’s when Nurmagomedov’s fight IQ came through and he took down Pitbull.

Much like his cousin Khabib, Usman is also a major force on the ground. Hence, Pitbull struggled and tried his best to stand up. But Usman maintained the pressure on top and made it near impossible for Patricky to stand up. Although Patricky succeeded in doing so momentarily, Usman dragged him down to the mat once more.

But Patricky’s championship heart came through and he pushed through the pressure to stand up once more with less than a minute to go. However, Usman was too elusive for Pitbull and survived the rest of the round to finish the bout with his head held high! He then hugged his older brother and UFC 135lbs fighter Umar Nurmagomedov to celebrate the amazing performance.

The result was never in doubt as the judges scored the fight 50-45, 50-44, and 50-44 for the Dagestani phenom. Previously, he stated his wish to become the first Dagestani-born fighter to win a Bellator championship. Even Khabib Nurmagomedov face-timed him immediately after the win to congratulate him. He then thanked Khabib and his coaches for building him up.

Khabib Nurmagomedov is usually in Usman Nurmagomedov’s corner for his fights. However, he was not there for this particular card as he is currently on a tour. He was spotted in Belgium recently.

However, he did make sure to wish Usman luck on Instagram. It looks like the Nurmagomedov dynasty is here to stay.