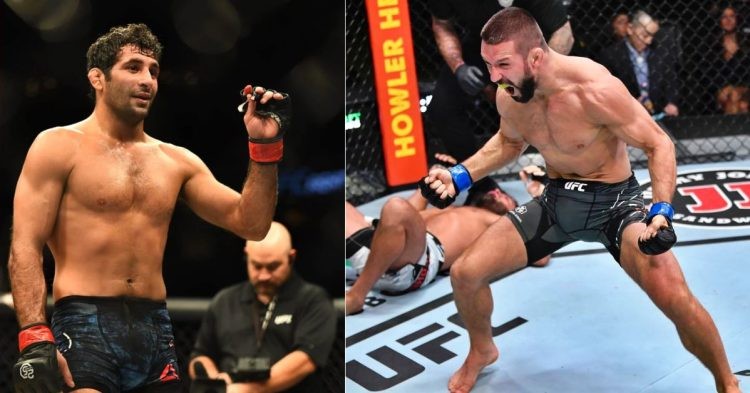 Beneil Dariush will return to the Octagon against Mateusz Gamrot at UFC 280 in what promises to be one of the biggest PPVs of this year in Abu Dhabi. Ahead of the fight, Dariush sat down with Schmo to discuss the match-up, and also shared his views on a potential Dustin Poirier fight.

Earlier, Dariush’s manager Ali Abdelaziz had claimed that the UFC is looking to book Dustin Poirier vs Beneil Dariush next. However, Poirier had called “fake news” on the announcement, completely denying the potential match-up.

Now, Dariush confirms he and his management were indeed looking to land a fight against Dustin Poirier. Be that as it may, they are happy with Mateusz Gamrot considering the skillset he brings inside the cage, and will be looking for a title shot with a victory at UFC 280.

Mateusz Gamrot has been absolutely brilliant inside the UFC Octagon. Barring the controversial loss against Guram Kutateladze in his UFC debut, Gamrot has won every single fight inside the UFC and currently enjoys a four-fight win streak.

“He’s definitely top-3 in terms of scrambling in our division. He’s a great grappler, and his striking is good too. He knows how to set up his punches. I don’t know if his striking is like, is what he prefers to do. I think he is always looking for a takedown.” Dariush said.

Gamrot showed an incredible display of mixed martial arts against Arman Tsarukyan in his last fight, with fans crediting his elite grappling. Going against someone like Tsarukyan, who has given a hard time to someone like Islam Makhachev in the past wasn’t going to be easy. Be that as it may, Gamrot emerged victorious, and showed increasing dominance in the latter part of the fight with both his striking and grappling.

Breaking down his opponent against the other elites of the division, Dariush claimed Mateusz Gamrot might be able to outwrestle Islam Makhachev. While he did not sound too confident, he still ranked Gamrot right at the top of the list for best grapplers in the UFC’s lightweight division.

“Man, his grappling is really good. I would say, he’s behind me. He might be able to outwrestle Islam, I don’t know. Islam, and Charles, I would say just the three of us are ahead of him.”

Do you think the winner of Beneil Dariush vs Mateusz Gamrot will face the winner of Charles Oliveira vs Islam Makhachev? Do let us know in the comments section.

NBA and China: Breaking Down the Billion Dollar Exchange