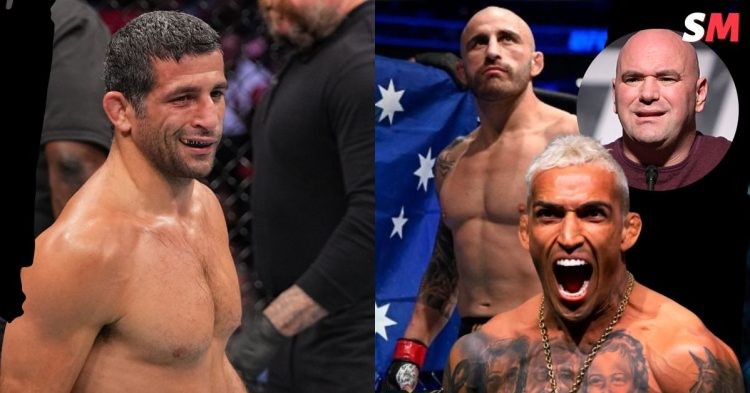 Days after UFC’s featherweight champion Alexander Volkanovski announced that he would be making weight at UFC 280 in Abu Dhabi, stepping in as a backup fighter for UFC’s lightweight championship between Charles Oliveira and Islam Makhachev, Benei Dariush has hit back at the UFC for the absurd decision.

Recently, Alexander Volkanovski took to social media and confirmed that he would be the backup fighter for Charles Oliveira vs Islam Makhachev at UFC 280 for the lightweight gold. Volkanovski has been hinting at a move to the lightweight division in his bid to become a two-division champion for quite some time now.

It’s Official, I’m the back up fighter for the Light Weight title!
See you all in Abu Dhabi 👊 #UFC280https://t.co/KkRCv1N04Y

While the UFC may have granted his wish by giving a green signal, Beneil Dariush is not happy with the recent decision-making. Dariush, who was initially scheduled to take on Islam Makhachev has been quite vocal about missing out on a title opportunity.

Dariush has expressed his views on Michael Chandler getting a title shot before him, and recently opined on how Islam Makhachev jumped the ladder due to his popularity and the backing of Khabib Nurmagomedov.

Speaking to Sirius XM, a confused Beneil Dariush said, “I don’t know if he’s playing games or the UFC is playing games, because I was told I’m the fill in.”

“That’s the whole point of having another lightweight fight on that card, just in case something goes wrong, so I don’t understand what’s going on here. I’m trying to get to the bottom of it, but ultimately I have one goal and that’s Gamrot. But I really thought I was the fill in, that’s what I was told.”

Beneil Dariush is quite confident he is next for the title shot should he get past Mateusz Gamrot next. However, he is still doubtful about UFC’s booking and has stated that he would be baffled if UFC decides to award the title shot to the winner of Dustin Poirier vs Michael Chandler instead.

Beneil Dariush (@beneildariush) says he was told he was the backup for the #UFC280 main event & is trying to get to the bottom of the situation.@RJcliffordMMA @DinThomas pic.twitter.com/bH5BF7ixEy

Dariush did make it clear that the option of being a backup fighter is not in his contract, but something that was conveyed to him by his manager. There has been no official confirmation from the UFC, and one waits to see whether or not Alexander Volkanovski will make the weight come UFC 280.