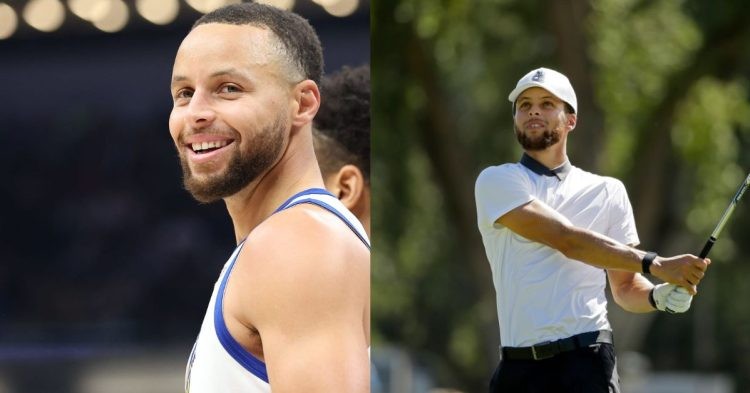 Steph Curry is the best three-point shooter ever. He is also a great lover of golf. NBA athletes tend to branch out and try, or even become quite good at different sports. Off late, Curry has earnt a reputation as a great golf player. In fact, one could argue that he is the best golfer in NBA history.

Michael Jordan, Chris Paul, and even JR Smith have all shown appreciation for the sport and have played it. Therefore, saying Steph is the absolute best would still be quite a stretch without proof to back it up.

The “American Century Championship” is a celebrity golf tournament. It is held near Lake Tahoe in the State of Nevada and is quite a popular event. Several NBA, NFL, and other professional league athletes participate in the tournament. It was no real surprise to many when  Curry decided to show up.

There were several videos released of Steph just kicking it back and enjoying himself. He engaged with the crowd and even showed off his famous NBA celebrations. Moreover, his presence also made NFL star Patrick Mahomes attempt a three-pointer and celebrate just like Curry would when it swished in.

Curry’s impact on basketball clearly had other people interested to try it out in front of the NBA superstar. However, the audience was left speechless when Steph made what can only be described as an incredible, unreal shot on the golf course.

I ain’t even surprised. Just another Friday for @StephenCurry30 🎯

The very arc of the shot and how far it was launched from speaks to Curry’s skill in golf. In fact, to the average fan, the difficulty of the shot seems so high that even pro golfers would have a hard time actually sinking those consistently.

It was also quite amusing to see Steph lose his mind after seeing that the shot went in. He instantly cheered and jumped in the air with his teammate to celebrate in a typical NBA manner. A truly well-deserved celebration indeed. Making that shot might have just landed Steph Curry the position as the “greatest golfer in NBA history“.