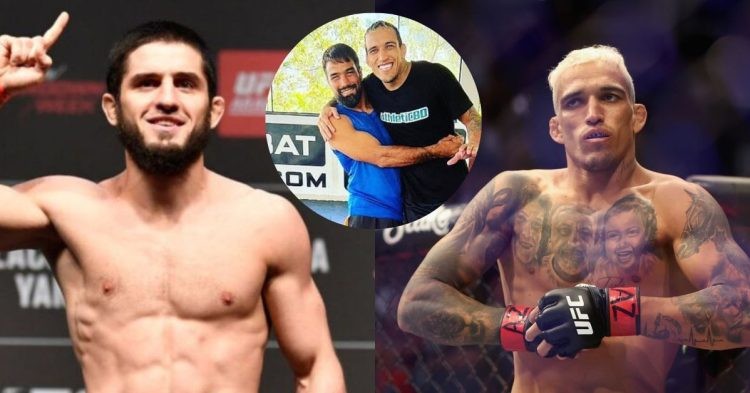 Former UFC lightweight champ Charles Oliveira takes on Islam Makhachev in a much-anticipated title fight for the vacant lightweight belt at UFC 280. After the departure of Khabib Nurmagomedov from the UFC, it has been said that Makhachev is the second coming of ‘The Eagle’.

However, Oliveira’s new coach, Alireza Noei thinks otherwise. Alireza is a decorated Iranian wrestler and he recently stated that Makhachev is an even better wrestler than the former UFC lightweight champion. In a recent interview, Noei stated:

“Charles Oliveira’s adversary, Islam Makhachev, is very good at wrestling. I think even better than Khabib, who is another athlete from Dagestan. He is better… He is a wrestler, Khabib isn’t.”

According to Oliveira’s Coach, Khabib is more of a Sambo fighter than a wrestler. Throughout his career, Khabib was known as the most dominant wrestler in the entire UFC. However, Alireza doesn’t disregard Khabib’s grappling prowess, instead compared his wrestling history with Islam’s.

“Khabib is a sambo fighter. Islam has also done Sambo, but he is a wrestler first, then a Sambo fighter, then an MMA fighter,” Coach Alireza added.

Like Khabib, Islam is also known for his mastery of wrestling and since his fight against Oliveira was announced, it has been an endless debate session in the MMA community. On the other hand, Charles is the most talked about fighter in the UFC right now and is respected very well for his elite grappling skills.

As expected, it is a hot topic on who leaves the octagon with the title on his shoulder. The dominance of both lightweights on the ground is what makes this matchup most interesting.

Watch the interview in the clip below:

Charles Oliveira Again Enters as an Underdog Against Islam Makhachev

Despite being one of the most skilled and dominant fighters in the promotion, Charles Oliveira is listed as a sizeable betting underdog. The former champ has entered most of his fights as an underdog but against all odds, won all his recent fights.

This might be because many critics are concerned that Oliveira will be dominated by Makhachev on the mat. Even with the highest level of jiu-jitsu, Charles might get controlled on the mat as per the analysts.

However, Coach Alireza Noei is confident that Oliveira is more than capable of fending off his opponent’s offense. Noei said:

“We have been working together for the last four years and I’m really impressed by how he has evolved. Even for myself, who always competed in high-level wrestling, it is hard to take him down. He is good both attacking and defending.”

Oliveira has the most fight wins via submission in the history of the UFC but also has improved his striking tremendously. The Brazilian has proven his might against the best strikers in the division like Gaethje, Poirier, Ferguson, and Chandler.

Except for Tony and Chandler, Oliveira won all of the fights via submission and has shown his durability and worth as the champion in the process. Meanwhile, Islam hasn’t faced a true striker or a top contender yet.

Talking about the matchup and Islam’s wrestling, Coach Noei added:

“We are working in all techniques, but I don’t think Islam will take him down. In case he takes Charles down, it will not be so easy to stabilize him like other opponents he faced.”

It will surely be one of the most exciting battles of this year as we get the final answer on who leaves the cage victorious.